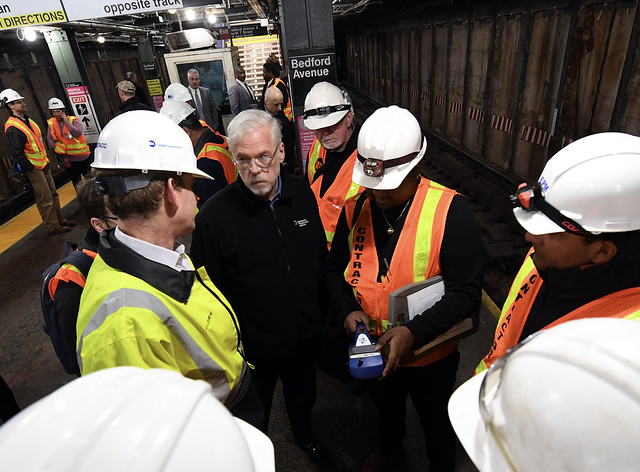 In recent weeks, Pat Foye, the new CEO/Chair of the Metropolitan Transportation Authority (MTA) has twice publicly committed to improving the Freedom of Information Law (FOIL) and open data processes at the MTA. This is welcome news and an essential step forward for a government authority that has lost a great deal of public trust and is widely perceived as being politicized by the governor’s office. Our organization, Reinvent Albany, will strongly support this push by Foye and we hope it is a small down payment on a new culture of openness.

The MTA is widely seen as having a serious credibility problem with the public and state Legislature. This loss of trust has been aggravated by the tendency of the authority’s top management to treat routine matters as emergencies that must be addressed suddenly, in secret, and outside of existing rules and normal processes. Some days, the MTA seems to operate more like the CIA than a public transit agency. This hurts public confidence in the agency and reduces the political support it needs to make tough decisions about spending and service disruptions.

For its own good, the MTA needs to act like a public transit agency, not the CIA. The core of New York’s Freedom of Information Law is that “a free society is maintained when government is responsive and responsible to the public.”

In the fight for congestion pricing, which Reinvent Albany strongly supports, members of the New York State Legislature expressed frustration at the MTA’s secrecy, and constantly questioned the credibility of information provided by the authority. Some of this was political theatrics by opponents of congestion pricing. But even allies of the MTA were critical, highlighting the gap between the public’s expectations that the MTA be open and honest, and the agency’s habit of shading statistics, telling partial truths, and making it difficult for the public to see underlying data -- including on high-profile issues like Con Edison-caused service disruptions and fare evasion.

We believe the MTA’s lack of candor and transparency is hugely self-defeating and has led directly to the Legislature imposing more and more reporting requirements, including a host of new ones in this year’s state budget.

Open FOIL
1. The MTA should adopt an Open FOIL platform using best practices from other jurisdictions such as LA Metro, the Port Authority of NY/NJ, and within New York State such as NYC Open Records. FOIL requests should be used to prioritize proactive release of information via a “Reading Room.”

Open Data
The MTA should publish all tables, charts and other tabular data from their performance reports, capital plans, budget documents, Board materials, and other reports as open data. This should include:

3. Full compliance with Executive Order 95, requiring the publishing of all public MTA data on the New York State Open Data portal. Legislation should be considered in this area if compliance cannot be achieved administratively.

4. Release of all underlying datasets that are used to create MTA performance metrics, with full release of methodologies and API access (allowing apps to interface the data automatically).

5. Creating a contracts database that provides full and complete information about projects and vendors.

6. Providing all data from current MTA Board and Budget materials well in advance of meetings in machine-readable, CSV spreadsheet form.

Budget and Capital Plan Transparency
8. Capital Planning Oversight Committee Materials should be improved through releasing all data in machine-readable, CSV spreadsheet form. Data should always include original project schedules and budgets. All current projects should be listed in the “Traffic Light” report, including those in the CPOC’s Risk-Based Monitoring Program.

10. MTA Capital Dashboard should be updated and improved, with improved timeliness of data updates, ensuring that all click-through data can be downloaded in bulk, more data such as contract numbers. The MTA should hold a user-group feedback session to identify additional improvement areas, and expand the “FAQs” Section.

Better Understanding Itself and Its Riders
11. The MTA should conduct and publicly release in an open data format an updated demographic analysis of its riders that looks at age, median individual and family income, race, ethnicity, gender, profession, disability, geographic locations, travel times, and other metrics.

12. The MTA should release more detailed methodology and tabular data about its fare evasion statistics, such as data broken out by borough, subway line, etc.

13. The MTA should release publicly, in an open data format, all data from its customer service portal and all staff analyses of the portal, polls and surveys.

14. The MTA should publicly release, in an open data format, its submission to the FTA of its Transit Asset Management (TAM) plan and the update to its 20-Year Needs Assessment.

15. MTA staff should conduct and release an in-depth “lessons learned” report about installation of Communications Based Train Control (CBTC) on the 7 Line.

Open Meetings Law
16. The Capital Program Review Board (CPRB) should comply with the Open Meetings Law to ensure that all of its deliberations are conducted in public meetings, in particular its votes to approve capital plans and their amendments.

17. A website should be created for the CPRB where it publishes its mission, activities, members, calendar of meetings, meeting minutes and materials, and contact information.

18. All future commissions, advisory workgroups, and other public bodies formed by law to provide recommendations regarding the MTA should fully abide by the Open Meetings Law.