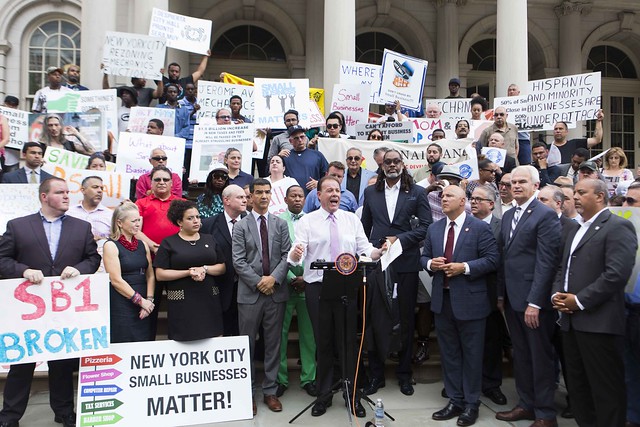 The number of jobs in New York City reached an all-time high this year, bringing the unemployment rate to record lows. We are the envy of the nation. But there is one key sector where jobs are declining. For the first time in more than a decade, we are seeing job losses among restaurants and food service establishments.

In an attempt to halt some of these losses, City Council Members Brad Lander and Adrienne Adams introduced legislation to prohibit employers from firing fast food workers without just cause, meaning for any reason other than misconduct or failure to perform job duties. They cite surveys showing that many fast food workers who have been terminated or had their hours cut were given no explanation as to why.

While well-intentioned, this proposal misses the mark because it ignores the underlying causes.

It’s as if lawmakers are trying to have it both ways by, first, imposing costly new requirements on businesses and, then, preventing them from making the difficult but legitimate staffing changes necessary to comply.

Small business owners certainly do not want to eliminate jobs. There is no joy derived from laying off employees. But the reality is that local regulations have so fundamentally altered the way that businesses operate here that employers often have no choice but to eliminate some positions in order to stay afloat.

Consider just a few of the mandates recently imposed on local businesses.

New York’s minimum wage has increased every year since 2013, reaching $15 an hour for most businesses in the city this year. This has been difficult for some to absorb because government has implemented other costly mandates at the same time.

In May 2013, the New York City Council passed legislation requiring employers with 20 or more workers to provide at least five days of paid sick leave. The following year the law was expanded to capture small businesses with as few as five employees.

In 2016, New York State’s Paid Family Leave Act was adopted, requiring businesses of all sizes to accommodate up to 10 weeks of paid leave for employees to care for a new child, care for family members that are ill, or assist loved ones when a family member is deployed abroad on active military duty.

These are all incredibly important initiatives, but the truth is that someone has to pay for them.

When the Manhattan Chamber of Commerce surveyed our members last year, small businesses cited the high cost of doing business in New York as the thing most negatively affecting them. Yet instead of helping small businesses compete more effectively, policymakers have signaled that more costly mandates are on the way.

Mayor de Blasio wants to force businesses with five or more employees to provide each with two weeks of paid vacation. Most medium and large companies already offer generous paid time off benefits, so it is primarily small businesses that will bear the brunt.

Is it any wonder that small businesses don’t feel that local government has their back?

If compliance with the law imposes perpetually-increasing costs of operation, businesses simply cannot raise prices at a rate that consumers will accept. Consequently, business owners are forced to cut costs wherever possible, including jobs. Preventing businesses from making those decisions will not save jobs; it will simply spell the end for many businesses.

The bottom-line: If lawmakers truly want to protect jobs, they must give regulatory relief to the businesses that provide those jobs and stop pretending that they can have it both ways.