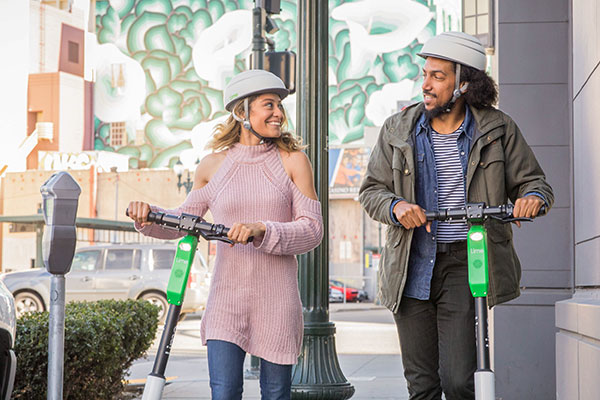 Solving our biggest global crisis of a rapidly warming planet means considering everything through the lens of potential solutions, even something as small as the electric scooter.

Micromobility is rightfully capturing the keen attention of urbanists around the world -- including the much-discussed e-scooter. And New York is poised to take advantage as well.

Simultaneously, New York is considering various necessarily ambitious policies to combat climate change and legislation to authorize local governments to roll out micromobility programs. Statewide, transportation is the number one source of carbon emissions, so these revolutions are closely related.

But New York must act decisively -- and quickly -- on both issues if it is going to start reducing its carbon footprint at a rate that allows it to reach its global warming goals and to prevent the harmful health effects of local pollution.

A recent International Panel on Climate Change (IPCC) report concluded we have 12 years to prevent the worst of climate impacts. Subsequent reports find our climate pollution emissions have continued to accelerate. Arctic melting has, as well. New York has already felt the dramatic and tragic effects of climate change, enduring the terrible power of Hurricane Sandy.

So any chance to significantly reduce the effects of climate change must be taken, especially when it improves other aspects of daily life. That’s where micromobility offers a tremendous opportunity.

Take the electric scooter itself, an under 50-pound mode of transit. Scooters stand in stark contrast to one- and two-ton cars, and the energy it takes to move them and space consumed to park them. Right now, two-thirds of trips made by car are under one mile. That’s a massive waste of energy when a large number of those trips are just one able-bodied person who could easily -- and often more quickly -- use a carbon-neutral option like a scooter.

People have noticed this when they have access to scooters, and the change trend is already well underway. They have taken shared scooters on over 50 million rides in the last year alone.

Moreover, independent studies by city transportation departments and internal company research have both found a roughly one-third, or often more, mode-shift in cities from scooters. This means one out of every three scooter rides is a trip not taken by ride-hailing, taxi, or personal vehicle, and when most vehicles are still one to two ton gas burning cars, that's a big deal for climate pollution.

It is also a big deal for public health, as local pollution afflicts people with health complications like asthma, and more often the urban young and old and people of color, a threat equal to a history of smoking.

For the New York City metro area, 100,000 shared scooters and bikes could easily prevent more than 300,000 car trips each day. That would also prevent nearly 50,000 tons of carbon annually and 4 tons of asthma-inducing particulates.

Right now, we need government leaders at all levels to have an Apollo-like mindset to the climate crisis and, as a result, measure every major policy decision through the lens of the climate fight. Scooters and electric micromobility are just one of the myriad of solutions we will need to deploy now to have a chance of making an impact on this global challenge.

We’ve done this before. During World War II, every major policy decision was put through the filter of the war effort. That allowed us to turn our economy into a giant cog of mission-oriented productivity, going, for example, from a production of just 3,000 bombers to a staggering 300,000 in those few years.

It’s time to make bold changes in the effort against this climate crisis. If this is our modern World War III, we'd better get moving, big and small, on city streets across the globe. New York can do its part by authorizing micromobility statewide right now.

***
Andrew Savage is vice president of sustainability and a founding team member of Lime, a mobility company that makes scooters, bikes, and more. He is a veteran of local, state, and federal government. On Twitter @limebike.