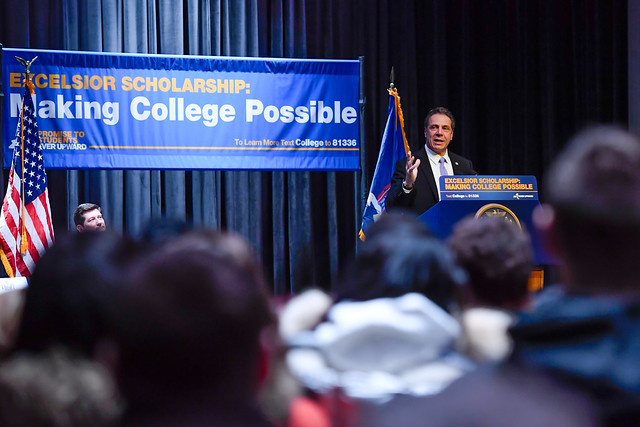 Governor Andrew Cuomo’s Excelsior Scholarship is increasing credit accumulation and college retention rates, but the program still needs to meet more students where they are at.

In 2017, Governor Cuomo embraced the “free college” movement championed by Senator Bernie Sanders and created New York State’s Excelsior Scholarship. Under Excelsior, students from families with annual incomes below $110,000—and increasing to $125,000 in fall 2019—can go to State University of New York (SUNY) and the City University of New York (CUNY) schools tuition-free.

Excelsior is a “last dollar” scholarship program that pays tuition amounts for full-time students that are not already covered by the federal Pell program and New York State’s nearly $1 billion Tuition Assistance Program. This is one factor that has kept the scholarship’s scale relatively small, covering just 3.2% of SUNY and CUNY students, according to a Center for an Urban Future report on Excelsior’s first year.

In fall 2017, approximately 400 of the 26,000 students at SUNY Suffolk County Community College on Long Island (SCCC) received Excelsior, according to SCCC data that was provided in response to a Freedom of Information Act request. Excelsior awards funds of up to the full cost of tuition, which at SCCC was $2,385 per semester in 2017-2018, or $4,770 per year.

Within this context, the 53.7% rate at which SCCC Excelsior recipients earned 30 or more credits extraordinary.

First, students who earn the 30 or more credits annually get to maintain the scholarship. Second, those who fail to meet the threshold must pay back one semester of their Excelsior awards. This means that bills of up to $2,385 faced SCCC Excelsior freshmen who did not meet the 30-credit threshold and did not present a special circumstance warranting an exception, like a parent’s death, or have earned credits from high school dual enrollment programs to help lift them over the 30 credit benchmark.

The punitive nature of the regulations, which many see as unfair, is a unique feature of New York State’s “free college” program, and it may play a significant a role in incentivizing students to accumulate credits at rates faster than they would otherwise.

The credit accumulation results were impressive, but what were Excelsior’s effects on retention?

Of the 139 students who fell short of the 30 credits, 64.7% re-enrolled for their sophomore years. These students, unless they were successful in appealing to the Higher Education Services Corporation (HESC) for continued Excelsior eligibility or had banked dual enrollment credits, started paying tuition and had to pay back one semester of their Excelsior awards, which together could total nearly $5,000.

In late January, Acting HESC President Dr. Guillermo Linares testified before a joint legislative hearing in Albany but ducked questions asking for the rates at which Excelsior students have been meeting the 30-credit benchmark. When Assemblymember Deborah Glick asked about students who have “fallen off of receiving Excelsior,” Linares said quixotically, “We’re not aware of any that have not received.”

Senator Toby Ann Stavisky asked directly whether “students [have] failed to fill the 30-credit,” and Linares said only, “There are very positive signs.” When Stavisky followed-up and specifically requested the “percentage that have failed to complete the 30-credit requirement,” Linares stammered back, “It’s very promising.”

HESC has replied to FOIA requests that I have made by saying that they need more time to respond. The sooner they can, the better. More data would help inform a policy debate on how Excelsior can be improved for the future and how “free college” programs should be designed in other states.

Drew Biondo, SCCC’s Director of Communications, said in a brief statement that Excelsior's full "benefit to our students, while showing early successes, will not be known for several more years."

Two Excelsior Policies that Need to Be Changed
As the conversation about Excelsior continues, serious consideration should be given to lowering the annual credit accumulation requirement to 27 credits.

If the standard was 27 credits rather than 30 credits, a significant number of additional SCCC Excelsior freshman would have earned enough credits to have met Excelsior’s benchmark.

As it stands now, Governor Cuomo’s touting of Excelsior’s success is like an algebra teacher congratulating him/herself on 53.7% of his students passing an exam; there’s nothing in such as a case to warrant self-congratulations.

A second change that should be considered is the provision of funds to support free summer enrollments. At SCCC, 62 of the 161 students (38.5%) who met the 30-credit threshold took at least one summer class that was paid for out of their own pockets. This is a significant percentage of students enrolling in summer classes. Consideration should be given to modifying Excelsior so that students who earn 24 or more credits during the regular academic year receive additional funds to take a summer class for free.

Excelsior’s scale is currently limited, costing the state $92 million during the last fiscal year, compared to the nearly $1 billion size of the TAP program. As a program that is still small (even if Cuomo’s rhetoric is anything but), now is the time consider improvements before Excelsior’s design choices become too entrenched.

In considering policy changes, their implications for how Excelsior funds are divided between SUNY and CUNY students and institutions should be evaluated.

More research would help determine whether making the above changes to Excelsior would rebalance the distribution of awards between CUNY and SUNY or exacerbate the imbalance.

***
Methodological note: SCCC provided raw data in response to the Freedom of Information Act request but did not provide comprehensive student record data. This research could be extended further with more data and verification of data elements from SCCC.

***
Eric Neutuch is a freelance journalist.