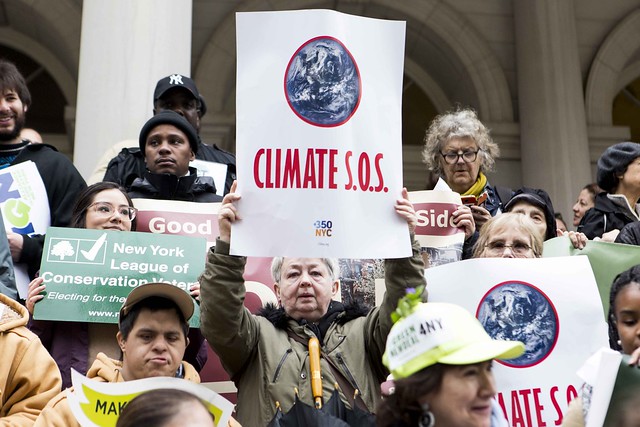 Grassroots climate activists hope that before state lawmakers adjourn for the summer they will strike a deal with Governor Cuomo to adopt the strongest climate legislation possible.

And let’s be clear: the strongest climate bill is the NYS OFF Act (A3565/S5526), not the more publicized Climate and Community Protection Act (CCPA).

The Off Fossil Fuels Act, for 100% renewable energy by 2030, grew out of the successful grassroots campaign to ban fracking in New York. It seeks to implement the study done by Stanford and Cornell professors showing how the state could by 2030 obtain 100% of its energy from solar, wind, geothermal, and conservation. It includes the critical component of calling for a halt to all new fossil projects, a measure not included in either the CCPA or by the governor in his agenda. Forty state lawmakers are sponsoring the OFF Act.

The CCPA deserves praise for making environmental justice and a “just transition” central objectives of any climate action. But its climate policies are centered around enacting into law a ten-year-old Executive Order from the Paterson administration. The bill that the State Assembly passed every year since 2009 to do that was changed three years ago to the CCPA, adding environmental justice and labor provisions.

Our understanding of climate change has itself changed a lot in the last decade, especially so in the last three years. The climate goals in the CCPA were rejected by developing countries at the Paris climate talks. They rebelled against the industrial polluter nations which want a goal of keeping global warming below 2 degrees Celsius, insisting the target be lowered to 1.5 degrees.

The International Panel on Climate Change (IPCC) recently warned the world that it had to significantly step up its climate actions as we have less than 12 years left to save life on the planet. The IPCC is a conservative body, due to the nature of “scientific consensus” and because its pronouncements need to be approved by the fossil-fuel centered countries like Saudi Arabia, the United States, Russia, and Brazil. Every study by the IPPC has understated the speed and severity of climate change. As one of its authors has said, for an accurate read, take our worst case scenario and double it.

Even Governor Cuomo upgraded his climate goals following the IPCC report, now calling for 70% of state electricity to be renewable by 2030.

I spent more than three decades organizing for a variety of low-income community groups to end poverty and promote economic justice. We cannot solve the climate crisis without ensuring that the poor and workers benefit from the transition. While dedicating jobs and climate funding to lift up disadvantaged communities, we need to advocate for policies that ensure such communities are not blown, washed, or burnt away by extreme weather.

We need to remember that it is the developing world that is home to the principal victims of climate change. Half of the residents of Puerto Rico were without electricity and drinking water for six months – and they are part of the United States (despite how the Trump administration may approach them)!

Scientists now openly discuss the possibility of human extinction and/or the end of civilization as we know it. The Extinction Rebellion has risen to demand an end to greenhouse gas emissions by 2025. A majority of Congressional Democrats from New York sponsor the federal Green New Deal with its 2030 timeline and the federal OFF Act with a goal of 2035. How can New York pursue a timeline decades slower?

We have to enact bold, even radical, climate measures that increase the chances of humans surviving climate chaos. We have to reject the approach of embracing incremental measures that politicians, paid for by fossil fuel campaign contributions, find “reasonable.”

New York lawmakers need to take the best ideas from the OFF Act, CCPA, Cuomo’s agenda, and the half-dozen other climate bills. Climate activists need to weigh in on the details of the dozens of issues being negotiated by legislative leaders.

The just transition provisions of the OFF Act are stronger than the CCPA in guaranteeing jobs and wages for displaced workers and assisting communities dependent on tax payments from existing fossil fuel plants. The climate funding for disadvantaged communities in the CCPA is more limited than what its supporters believe. A key fight will be over how much funding is allocated and for what type of projects.

We need to develop detailed climate plans with short-term benchmarks with no more than two-year intervals for review and update. New York is not even close to achieving its goals for renewable energy established by the Pataki administration in 2002. Lawmakers need to allocate probably $10 billion a year to support the transition, an issue that has been largely ignored.

Many of the enforcement provisions in the CCPA were weakened by the Assembly. Those provisions should be restored, such as state agency compliance and the right for citizens to sue to enforce the law.

Far more action is needed on transportation and buildings, with each accounting for more than a third of the state carbon footprint.

New York cannot afford to waste this opportunity to adopt the best climate agenda. The devil is in the details. We need to listen to our children who want a world that gives them a chance for a decent future.

***
Mark Dunlea is Chair of the Green Education and Legal Fund. On Twitter @DunleaMark.