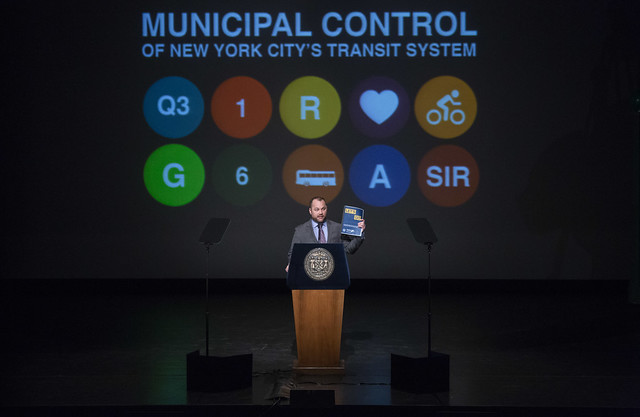 With subway and bus riders so frustrated with poor service, it is understandable that city leaders are talking about changing the governance of the MTA and its New York City Transit (NYCT) division as a solution.

Most notably, City Council Speaker Corey Johnson has come up with a well-intentioned but ultimately misguided plan to break NYCT off from the MTA and vest full responsibility for its funding and operation in a mayor-controlled structure he’s named Big Apple Transit, or BAT. BAT would run the city transit used by millions of New Yorkers every day.

The speaker and I, along with MTA Board member Veronica Vanterpool and moderator Charles Komanoff, appeared Wednesday evening on a panel to discuss his plan, part of the Theodore Kheel Fellowship Program at Roosevelt House at Hunter College.

The appeal of the speaker’s plan has been enhanced by Governor Cuomo’s pre-election (and continuing, although to a lesser extent) protestations that neither he nor anyone, really, controls the MTA and is responsible for improving how it operates.

But shifting from MTA to city government control would only substitute New York City-centric political challenges for regional ones, and could well make some of the system’s problems worse. Attention and effort would more usefully be focused on reminding the current MTA Board of its fiduciary responsibility to the agency, not to the Governor, demanding more transparency and requiring serious oversight by the State Legislature.

It is far easier to argue for city control of subways and buses than to get into the weeds of how to reform MTA procurement, why and how to install a new signal system, or the need for work rule changes in union contracts. But these are the dynamics that need change the most.

There are several reasons why a shift in control of subways and buses from a regional to a city authority would be problematic.

First, the separation of city buses and subways from the rest of the MTA’s assets runs counter to the long-term goal of creating a more integrated regional transit system. More than 1.1 million people commute into New York City to work. They swipe their metrocards half-a-million times a day. We need these workers to contribute to the city’s economy, shop, and pay sales taxes in addition to bridge tolls and fares that help support the buses and subways. We need to be thinking about how to better connect Westchester and Long Island transit systems (and yes, New Jersey and Connecticut as well) to the city’s, not allow them to exist in siloes.

Second, even if it were desirable, a new Big Apple Transit would not be financially viable. We have a Metropolitan Transit Authority because it serves, and derives revenue from, seven suburban counties in addition to the five boroughs of New York City.

The Payroll Mobility Tax and the dedicated regional sales tax are levied on businesses and activities in the region with suburban counties as well as residents and businesses paying a significant share. In particular, the PMT generates more than $1 billion per year for NYCT. This tax was vehemently opposed by suburban legislators when it was adopted in 2009 and it has repeatedly been subjected to various exceptions. The state Legislature agreed to make up some of the lost revenue from the exemptions.

Can there be any doubt that if NYCT were separated from the regional MTA the state Legislature would quickly and gleefully cease providing the lost revenue from the exemption from the PMT and might well suspend or redirect other regional taxes designated for the MTA exclusively to the LIRR and Metro North?

This could mean that city residents and businesses would be required to make up the loss of some of the $2 billion in annual revenue from sales taxes, ride-hail surcharges, mortgage transfer fees, etc. now devoted to the NYCT. Even if replacement of these revenues with local taxes were acceptable to the public(!), there is no guarantee that the state Legislature would grant New Yor City authority to impose them.

And the subsidy from general state revenue would be at risk as well. The governor has made his view on this clear: “If New York City took [transit] over, they take it over. They don’t get the state funding.”

Speaker Johnson’s proposal assumes that all regional and state subsidies to NYCT would remain in place and even then, he projects the city would need to come up with an additional $1-1.5 billion in revenue a year. The loss of any or all state and regional support, totaling almost $3 billion a year, could make the shortfall overwhelming and would require significant increases in fares and other taxes. And the shortfall would be even worse if there is a recession.Will city taxpayers and riders put up with absorbing all of that?

It is of course undeniable that the MTA Board structure obscures accountability. But it is necessary and appropriate for a regional transit system to have representation of all the impacted counties on its board.

Nonetheless, the Mayor has more appointees than anyone besides the Governor, who also appoints the CEO/Chair. After all the drama of the last year over service disruptions, the declaration of a state of emergency to expedite repair work, the announcement of the Fast Forward Plan, and the governor’s last-minute intervention and rejection of the planned shutdown of the L line for a modified plan, it is now abundantly clear that the buck stops with the Governor.

Yes, the Board needs to fulfill its fiduciary responsibilities, be more transparent and exercise better oversight, but merely switching ultimate responsibility from one elected official to another will not change the fact that, so long as public transit is a public responsibility, it will have political leadership that shies away from making tough decisions.

To properly maintain and improve 24-hour bus and subway service, fares need to be regularly and steadily raised. Service needs to be suspended on some lines for periods of time so they can be properly maintained and repaired. A Board appointed by the Mayor will not find these decisions any easier than one controlled by the Governor, especially if it has to generate even more revenue because of the absence of state and regional tax support.

It is clear that one of the main drivers of NYCT cost growth is personnel. Why will the Mayor be any more likely than the Governor to resist the power of the Transportation Workers Union (TWU) and other labor unions? Notwithstanding Governor Cuomo’s intervention in 2014 to forge a contract settlement with transit unions – with no productivity initiatives or fringe benefit savings to offset wage increases – TWU head John Samuelson is already threatening a strike in response to recent exposés on overtime abuses and related criticism. A Mayor would be even more susceptible to these kinds of threats.

Disjointed regional transit planning and administration, possible loss of substantial state and regional funding, a fraught environment in which to implement fare increases, raise taxes, and negotiate labor contracts – these are the likely results of “blowing up the MTA.” Better to focus on practical, feasible steps to make the MTA work better right now. Reinvent Albany recently published a report with 50 Actions New York Can Take To Renew Public Trust in the Metropolitan  Transportation Authority that contains many worthwhile proposals. Among the most significant:

-The MTA Board should vote on policy decisions, not adopt them de facto though contract approvals.

-The Senate and Assembly should create committees dedicated specifically to oversight of the MTA, not treat it as part of the general Transportation or Authorities Committee jurisdiction where the MTA region are not well-enough represented.

-MTA Board members should be subject to a real, thorough vetting and confirmation process.

-There should be much more open data on contracts, project progress, budget and capital planning.

-The MTA fiscal year should be moved to begin in July instead of January, so state budget actions can be taken into account in financial planning.

-Procurement should be streamlined so there are fewer incentives for change orders and cost overruns.

Instead of devoting time and attention to the idea of putting different people in the seats on the deck of the Titanic, let’s work on getting the ship into stable waters and smooth sailing by insisting on competence and accountability from the crew we have.