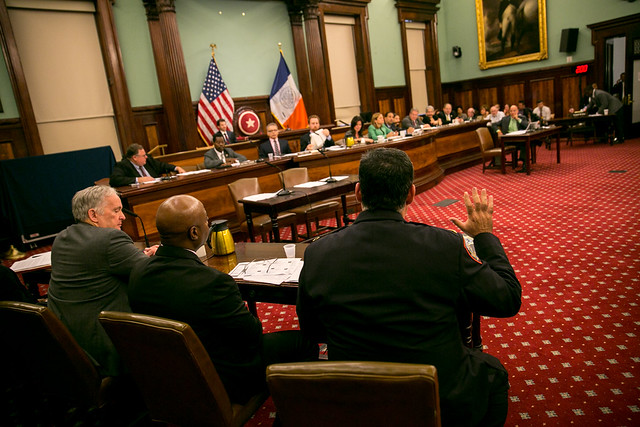 We are in a unique moment in history. New York City is embroiled in a process to build new jails -- the aftershock of a grassroots campaign to shut down the human rights catastrophe at Rikers Island. New York State recently passed bail reform, which must be implemented in every county on or before January 1, 2020, and across the country “criminal justice reform” and “ending mass incarceration” have become mainstream conversations -- an unthinkable reality just ten years ago. It’s a moment that carries monumental opportunities and tremendous risks.

For New York City to make the most of this movement, we must reconsider how we think about criminal justice reform and reset the dial towards progress and equity outside the system.

Actions and planning cannot be narrowly focused; instead our elected officials must be prepared to fight for the fundamental needs of the communities from which city jails draw their populations. This must include massive investments -- billions of dollars -- to fund what communities have long been starved for: healthcare, housing, education, and other fundamental resources.

Recently in Manhattan, the Mayor’s Office of Criminal Justice presented at the last of four community board hearings on the city’s new jails plan. Just after, the City Council held its first hearing on the implementation of statewide reforms to bail and discovery rules. Just before, Council Speaker Corey Johnson unveiled his own plans for criminal justice reform in New York City.

Each of these presentations were standard: they focused on prosecutors, public defenders, courts, police, infrastructure, land use, and “off-ramps” for people already caught up in the system. This is typical criminal justice reform rhetoric. But they also mirror “reforms” across the country which have (unwittingly or not) ended up expanding the reach of the carceral system rather than shrinking it.

New York State has reached a tipping point, and could serve as a model for the rest of the country by calling for a dramatic expansion in the scope of what would be required to truly take on “mass incarceration.” We must get away from the old-fashioned notion that crime is a result of moral or personal failures that can be cured one case at at time, instead of a socio-political problem dictated by structural inequality, poverty, race and politics. We must acknowledge and act on the reality that criminal justice reform will never be successful or sustainable when it is siloed off from other crucial social issues that impact our society’s most marginalized.

Jails have long served as the catchall way to manage New York City’s most pressing crises: record homelessness, unmet mental and behavioral health needs, substance use disorders (SUD), joblessness, and poverty. (The same is true across the country.)

In general jail populations are symptoms of failed social policies and the politics of mass incarceration. According to reports, 16% of the daily jail population in New York is people who have been diagnosed with a serious mental illness, and 75% have a substance use disorder. These numbers are similar to incarcerated populations across the country.

New jails cannot address record high homelessness, record high overdose deaths (which remains the leading cause of death in New York City shelters), joblessness, and poverty. Nor can they address the shameful history of racial discrimination and divestment from our communities. Bail reform—which should reduce the jail population—can’t address these issues either if implementation focuses solely on city government’s new legal responsibilities under the law.

At the most recent hearing on the city’s response to statewide reforms, City Council members and the Mayor’s Office of Criminal Justice (MOC-J) both listed as their partners in implementation the local district attorneys, the office of court administration, public defenders, and the police department. Implementation would only be successful, testimony suggested, if millions of dollars were poured into prosecutor offices. But there was no mention of Health + Hospitals, the Department of Health and Mental Hygiene, or the Department of Social Services in this conversation. No one raised the fact that jails operate as one of the city’s largest homeless shelters, and neither the Department of Homeless Services or the Department of Housing Preservation and Development were invited.

The city risks missing the point here. Omitting the fundamental needs of the community means more overdose deaths, homelessness, joblessness, and poverty. It ultimately means, more incarceration and criminalization. As the jail population drops, what resources are we giving directly to communities in order to keep them safe, thriving, and able to manage inevitable conflicts and tensions without relying on a criminal punishment system that has historically failed to resolve any social problem? Why isn’t Steve Banks -- the Department of Social Services commissioner -- leading this work, instead of a thin MOCJ task force?

The city is preparing to spend $8.7 billion to construct four new jails over the next several years as part of a plan to close the Rikers Island complex. That plan does not include ANY investment into marginalized communities impacted by incarceration -- despite research that these investments can credibly decrease incarceration, which is, after all, the city’s stated goal. The City Council’s first stab at bail reform implementation also appears headed towards massive investments into the system, while ignoring community investments.

New York City has a tremendous opportunity to reinvest in communities to help them thrive and to make them safer. To get there, we must expand the scope of this discussion and address the root causes of the social problems that we have tried and failed to address through mass incarceration, policing, and criminalization while stigmatizing generations of our fellow New Yorkers.

***
Nick Encalada-Malinowski is the Civil Rights Campaign Director at VOCAL-NY. On Twitter @nwmalinowski.