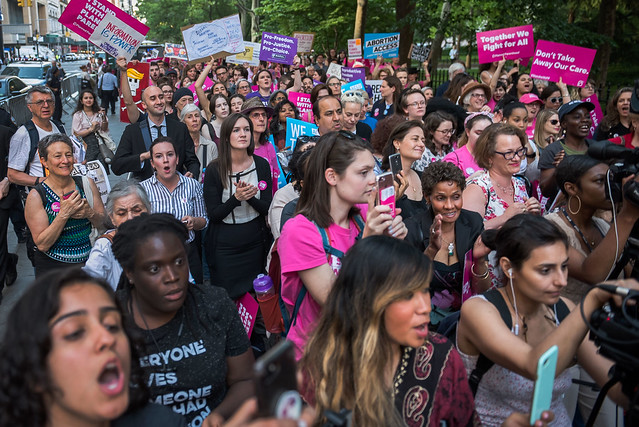 The fight for safe, legal abortion started long before Roe v. Wade legalized abortion care. Planned Parenthood of New York City and all Planned Parenthood affiliates will always stand in solidarity to protect safe, legal abortion. That has not, and will never change. However, we live in a country where health care is deeply politicized -- because politicians have made it that way, even here in New York.

I echoed the true New York City spirit - If you mess with one of us, you mess with all of us - that evening at a “Stop the Bans” rally in Lower Manhattan. I described the abortion bans as a coordinated attack in order to drive care underground and force a national showdown at the Supreme Court. I added that it’s not just an attack on women, it’s an attack on anyone who can and might get pregnant - including transgender men and gender non-conforming people. The crowd cheered with approval. I imagine in that moment, people who fought to be seen as human, got the recognition they needed and deserved.

Immediately after the rally, anti-abortion extremists pounced on the opportunity to denounce my statement. One network rolled footage of a woman in front of a podium at a reproductive rights rally, while the host criticized what I said. It was clear the network failed to acknowledge the unique individuality of women, and all people, across our country. The host growled the stale notion that “that only women can bear children...reality is worth defending.” I disagree. This reality is worth defending, as are the fundamental human rights of our patients.

Transgender men and gender non-conforming people can have children if they want to. They are also at risk of pregnancy against their will. A 2015 survey found that 47% of transgender people are sexually assaulted at some point in their lifetime. For transgender men, a devastating rape could result in unwanted pregnancy. Planned Parenthood of New York City will always be a safe haven for anyone who needs compassionate, non-judgmental care. Our doors will always be open to everyone.

Unfortunately, the Trump-Pence administration refuses to embrace people with the same compassion. This year, the White House welcomed Pride Month with a proposal to dismantle Obama-era protections for transgender people. The administration wants to make it legal for doctors to discriminate against patients based on their gender identity. The White House also wants to define gender as a fixed biological condition -- essentially erasing transgender identity out of existence.

Now, the Trump-Pence administration has created a new health care hurdle by enforcing the Title X “gag rule.” The “gag rule” makes health care providers, like Planned Parenthood, ineligible for federal funding for family planning and preventive care -- like birth control, STD tests and treatment, and cancer screenings -- if they also counsel or refer for abortion care. This is another way of politicizing health care at the expense of underserved and uninsured people -- our people, our patients.

Here in New York the situation is much different. Earlier this year, New York shielded legal abortion in our state with the Reproductive Health Act (RHA), cementing New York’s position as a safe haven for sexual and reproductive rights, even if Roe is overturned by the conservative majority in the Supreme Court. The RHA was a political win for New Yorkers and the national fight for reproductive freedom. Our Albany lawmakers exercised their legislative power to safeguard reproductive rights for all New Yorkers, and for anyone across the country who may have to travel to our state for safe, legal abortion. Simply put, this victory proves that elections matter.

Health care is at the core of Planned Parenthood’s mission, and has been for more than 100 years, but it is also our obligation to heal the scars of political oppression and ensure that laws and policies allow us to continue care for the next 100 years. We will stay committed to protecting our patients, because if we don’t advocate for their right to affordable, quality medical care, who will?