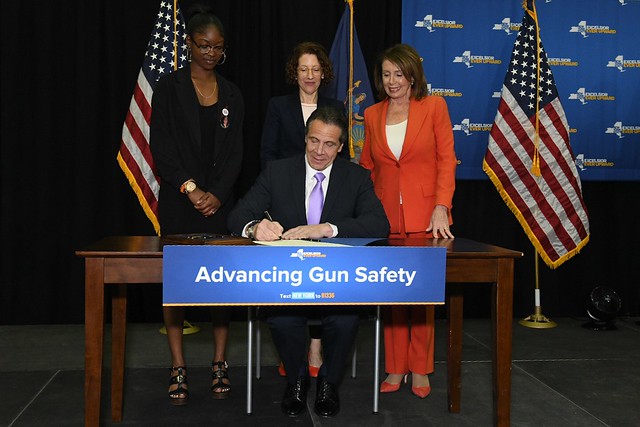 After the Gilroy, El Paso, and Dayton massacres of the last two weeks, many Americans are asking how many more Stephen Romeros have to die before we stop the corporate, state-sponsored domestic terrorism of the gun-rights lobby. If you need to take a tally of children killed by guns, start with Stephen, and then include the 20 children of the Sandy Hook school shooting of 2012, then add Parkland and don't forget Keyla and Trevor, who were killed with Stephen that day in Gilroy.

When we are done counting the dead, the number of children killed by firearms every year in the United States is in the thousands!

No person should fear walking out their door. We should be free to attend a movie, go to the mall or a concert, congregate to celebrate one’s faith, or have fun at a festival with our friends and family without looking over our shoulder or imagining someone showing up with an AR-15. No one should be wondering if today is the last day they will see their child alive when they send them off to school.

This is terrorism, enabled by a dysfunctional Congress that accepts the legalized bribes of the gun lobby and weapons manufacturers and executives. Campaign funds and Super-PAC money from the gun lobby are used to influence federal government decisions to do nothing but send thoughts and prayers to the devastated families and many millions more who live in fear of being next.

Recent polls show a majority of Americans want more safety from guns. Overall 61% support stricter gun laws in the U.S., 77% support requiring a license, and 63% support a nationwide ban on assault weapons. And 94% support background checks, even a vast majority of NRA members who were polled, 69%, are in favor of background checks. The safety of our children isn’t a partisan issue, it’s a necessity and Americans know that. Why doesn’t Congress?

The obvious reason for Congressional inaction is partisanship. The gun lobby, especially the NRA, floods Republican coffers with campaign contributions from their various Super PACs and for decades used their money to campaign for a majority of Republicans and against Democrats. Making gun legislation a partisan issue and creating division within the Republic. They have in effect enforced a paid for blockade on gun safety legislation from the majority of Republicans.

Inaction in Washington, D.C. can be contrasted with action in Albany.

New York legislators and Governor Andrew Cuomo are creating safer communities for all. Most recently, New York has passed several gun safety measures like the Red Flag law andextending the waiting period from three days to 30 during a delayed background check. They banned the sale of bump stocks in the state and passed mandatory lock and storage for gun safety in the home. They defied the culture of fear when they banned teachers from carrying firearms.

These 2019 accomplishments followed the passage of 2013 gun laws in New York that came just after the Sandy Hook elementary school massacre, measures that included a ban on assault weapon sales.

While some states like New York might be leading, Americans need and are asking for Congress to pass national comprehensive gun safety laws, which are especially necessary where there is no state-level leadership.

Congress won't act until we get rid of the corruption of big money in politics. The gun lobby has spent millions in legalized bribes to Congress, through campaign contributions and Super PACs and other dark money groups. This flow of money to campaign coffers ensures that regulations on the industry are almost non-existent. Those who can pay to play buy Congress’ attention, it’s a fact. The American people can lay the dead at Congress’ feet and still, they’d step over the corpses of our children to grab a check from a gun lobbyist.

The problem of money in politics is linked to the crisis of mass shootings and the domestic terrorism that we as a society face daily. Americans can do more than pray for a better tomorrow, we can demand legislative change to end the corruption that is preventing a safer, better world for our children.

That change needs to come in the form of an amendment to our United States Constitution for campaign finance. Once we have that, we can end the stranglehold of the gun lobby on Congress and that leaves the peoples’ voices to be heard. If Americans want a nation of safer schools and safer communities, we need to end this corruption now.

***
Joseph Sackman is the national coordinator for Wolf PAC. On Twitter @WolfPAChq.