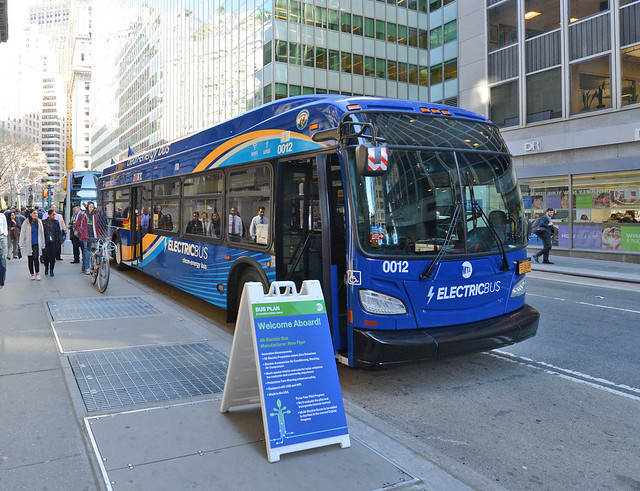 One of the most frustrating things about local New York City politics is that many people who believe in progressive ideas on the national stage do an about-face when it comes to progressive change on the local level, often when that change might actually touch their day-to-day lives in some way.

This phenomenon has been captured perfectly by the current debate around the 14th Street busway -- a pilot program approved by the mayor, which would prioritize public transit and trucks over private cars on one of the city’s busiest corridors -- and the troubling last-minute temporary restraining order against its implementation.

Just about everyone talks about how we need to make transit better for working New Yorkers, and that moving New Yorkers by bus, train, and bikes is more efficient and environmentally-friendly than by car, and yet, progress has been ground to a halt in the name of “environmentalism” by a few local residents using their connections and resources to jam up a groundbreaking transit project.

The lawsuit that led to the restraining order comes from a few wealthy, car-driving “progressive” West Side residents who claim that the 14th Street bus plan, as well as the protected bike lanes on 12th and 13th streets, should be subject to an environmental review. (Funny, the car lanes and free parking weren’t subject to an environmental review.)

The cynicism being displayed here by some of my West Side neighbors is far from universal. In fact, support for a busway on 14th Street in our community is overwhelming.

Community Board 6 Manhattan, of which I am a member, represents 147,000 New Yorkers on the East Side, covers half of the 14th Street corridor, and has been on the record supporting bus priority for almost a year. We first voted in favor last September, and then just reiterated our support in a second resolution in February.

Our position has been informed by the testimony of dozens of people at multiple meetings, including meetings hosted by us, by the city Department of Transportation, by the Metropolitan Transportation Authority (MTA), by our elected officials, and others.

Our support for bus priority on 14th Street is informed by our own experience. Because there’s no area north-south subway east of Union Square, we depend on MTA buses more than people in other parts of Manhattan. We rely on the M15-SBS almost like a subway. We use existing upgraded crosstown bus service like the M23-SBS and M34-SBS to connect to the subway system. And we absolutely depend on 14th Street bus service, which (as everyone knows) is unreliable even after recent MTA upgrades.

In our neighborhood, we need and we deserve world-class transportation, and the transit and truck priority corridor the DOT planned would give it to us. It was planning to launch last month — until West Side attorney Arthur Schwartz, who is leading the lawsuit, somehow convinced a judge to put it on hold.

It’s rich to have Schwartz attack the busway with the baseless claim that the community is united in opposition to it. I am here to tell you that that claim is false; the support of Community Board 6 is emphatic and broad-based and it’s on the record. It shouldn’t surprise us that this same attorney has been cluelessly quoted that he doesn’t take the bus when he’s in a hurry.

But some New Yorkers don’t have much of a choice; people like me and 27,000 of our neighbors ride the M14A -- the city's slowest bus -- and M14D every day. Collectively we've lost out on about a year's worth of time while our buses idle in mixed traffic. Our voices matter.

The benefits of faster and more reliable bus service disproportionately accrue to people with lower incomes (that’s the definition of progressive). That reality isn’t lost on most of us invested in the fight to improve transportation in New York City, and we aren’t going to let people like Schwartz wear a mantle that he hasn’t earned, no matter how much they like to call themselves progressive.

I hope the baselessness of this lawsuit is exposed at Tuesday’s hearing where a New York State Supreme Court judge will hear arguments on both sides. I’m optimistic we can get the busway back on track as soon as possible. It will be a game-changer for tens of thousands of working New Yorkers, saving us thousands of hours a year otherwise sitting in traffic or standing in the rain. That’s a progressive step forward that everyone should support.

***
Rich Mintz is a member of Manhattan Community Board 6. On Twitter @richmintz.