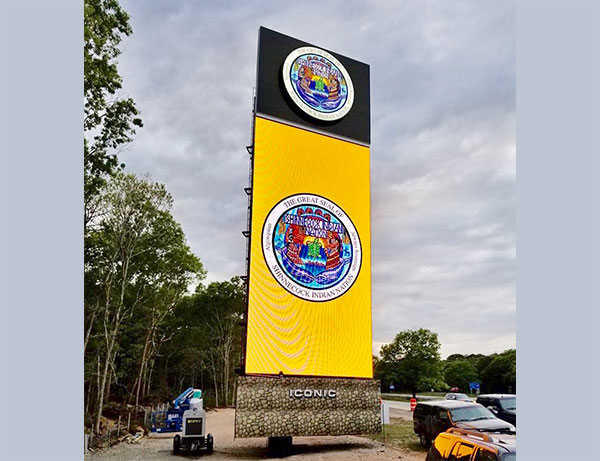 New York State Attorney General Letitia James earned a reputation as a relentless fighter for working people in the Brooklyn gentrification struggles of the early 21st century. Representing parts of Fort Greene, Clinton Hill, Crown Heights, Prospect Heights, and Bedford-Stuyvesant in the early 2000s, City Council Member James insisted that low-income and working people must have a place and a future in Brooklyn.

Block by block, James helped community members keep their homes and businesses in a context where the rent -- tied to the speculative dreams of wealthy investors and not to the livelihoods of current residents -- was always rising. James's office supported my own rent battle in Crown Heights from 2005 to 2010.

But now, in her new statewide role as Attorney General, James is threatening the land rights of a community that has resisted and survived one of the original, violent processes of forced displacement in United States history. Why?

The Shinnecock Nation of Eastern Long Island is facing legal threats from the state Department of Transportation (DOT) and the State of New York for launching a billboard project on tribal land.

The advertising revenue from two 60-foot electronic billboards on either side of Route 27, known as Sunrise Highway, at Hampton Bays is slated to support health and dental clinics, a community daycare facility, and other projects for the Shinnecock community.

The town of Southampton, the Shinnecock's nearest neighbor since 1640, has deemed the billboards a driver distraction, an aesthetic blight, a detraction from the 'character' of the Hamptons, and has enlisted the DOT to stop the project.

The irony of Southamptonites' pearl-clutching in response to the Shinnecock’s modest attempt to chart a path toward economic survival, and not to the McMansions, the private jets, the environmental disaster of a golf course, and all manner of excess that characterize the Hamptons development trajectory is laughable, but not surprising. For generations, Southampton town has insisted that the Shinnecock should play a particular role (read: silent, servile, picturesque) in their shared community.

And yet, the Shinnecock Nation's decision to use its land as its members wish is their right, the result of 32 years of successful struggle to become a federally-recognized Indian nation; NIMBY doesn't work when it is not actually your backyard.  The legal battle involving this only highway into the Hamptons tests the solidity of federal tribal sovereignty rights against a monied community’s belief that the future of the Hamptons is theirs alone to dream and develop.

Supporting the Shinnecock are the National Congress of American Indians (NCAI) and others who recognize that the survival of indigenous communities will require new, creative, and unapologetic assertions of sovereignty. In many parts of the country, state or federal highways run across tribal land. These thoroughfares are spatial evidence of a history of violent displacement but they also offer economic opportunities for native communities. By foregoing local or state permits, the Shinnecock root their economic development project in their hard-won federal legal status; and well they should. State and local courts have historically lacked the precedents or courage to support indigenous economic self-determination. The problem of so-called “home cooking” in biased state courts is legendary in federal Indian law jurisprudence.

Given her 2018 election as the state’s chief legal officer, Letitia James has an opportunity to move Albany beyond the acrimony that predates her, and has long characterized the relationship between New York State and the Shinnecock Nation.

James had spoken of a desire to use the law to fight for all New Yorkers; there are few politicians who better understand the right to space as a key battleground for creating opportunity and equity. However, the entanglement of economic marginalization and geographic displacement looks different in the state versus the city contexts. Here, the "neighborhood" is the curling whippet of land along the Peconic Bay; "gentrification" has looked alternately like genocide, golf courses, and greenwashing (among other things) over the past five centuries.

A phenomenon that native scholars have coined “indigenous erasure” helps explain why the Shinnecock billboard project faces such opposition in eastern Long Island, why few in the New York City-Hamptons circuit have spoken out about this issue, and why a progressive fighter like James has not yet reached out to the Shinnecock Nation, choosing instead to maintain the state’s track record of relating to this community through lawsuits and threats.

I live in eastern Long Island, where indigenous names dot the landscape from Montauk to Massapequa and yet non-native communities are defensive or downright hostile when asked to acknowledge the indigenous present or make room for an indigenous future. Southampton Supervisor Jay Schneiderman’s claim that "[the billboards] will completely change the character of the community we have fought long to protect" reflects a jarring sense of entitlement; 500 years of settler history will do that to you.

In these parts, people wonder out loud why the Shinnecock can’t think of anything beyond cigarettes and billboards to earn money -- which is really a way of insisting that the Shinnecock future must follow a course pre-approved by the settlers in their midst who know little about the Nation and care even less. In my area, people crow loudly that this billboard project is the Shinnecock “straying from their culture”-- which is really a way of saying that externally-generated stereotypes of American Indians are more authentic than the voices of actual living indigenous people. ‘Why can’t they just follow the law?’ I have heard. ‘This is not about race, it’s the law!’ But this too is a smokescreen, a bemusing disregard of the copious evidence that U.S. law, particularly where land is concerned, has never been color- or power-blind.

And yet, with all deliberation and speed the Shinnecock Nation moves forward to pursue an economic future despite being largely excluded from the wealth streams of the Hamptons development machine. And so Shinnecock tribal elders have deemed these billboards a monument. They have claimed them as works of art and justice, as a tangible symbol of the Nation’s effort to choose how it is represented in public and to determine its economic trajectory.

As a historian, I understand the multivalent work of monuments -- the way they preserve and petrify particular narratives in their heavy materials. So this past July 4 at sunrise, I joined my Shinnecock neighbors at this monument as an act of solidarity and gratitude for their work of art and faith. I almost hoped to see Attorney General James there. I’ll be looking out for her on Labor Day Weekend at the 72nd Annual Shinnecock Pow Wow.

***
Dr. Abena Ampofoa Asare is Associate Professor of Africana Studies and History at Stony Brook University (SUNY). She is the author of Truth Without Reconciliation: A Human Rights History of Ghana (University of Pennsylvania, 2018).