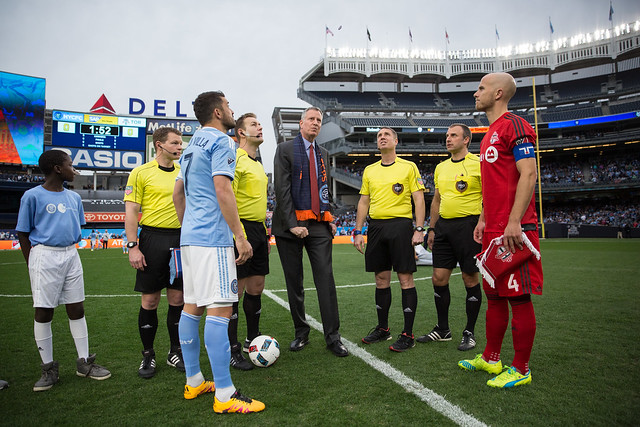 When Jeff Bezos, the world’s wealthiest man, and Amazon sought to locate a major campus in New York City, they ran into a buzzsaw of opposition that derailed the project. Despite the promise of tens of thousands of jobs and millions of dollars in local investments, members of the community reacted to the company’s planned arrival with fear and fire. Rallies against the tech giant occurred weekly. Elected officials orchestrated public hearings where they criticized the corporation. Lots of bad press accompanied the news that Bezos would have his own helipad.

Neither Governor Cuomo nor Mayor de Blasio could put this Humpty Dumpty deal together again. After months of disgrace, Amazon withdrew.

Now, the world’s third-wealthiest man, Mansour bin Zayed, owner of the New York City Football Club, wants to build a soccer stadium in The Bronx. And, like Bezos in Queens, he’s likely to run into a storm of opposition from that community. What can be learned from the Amazon issue that can help both the neighborhood and the stadium project?

The collapse of the Amazon move into Long Island City signaled the end of the era of the “Community Benefits Agreement” (CBA). The benefits agreement strategy has been used by neighborhoods for decades to confront gargantuan development projects like sports arenas or corporate expansions. But decades of unfulfilled promises made by corporations and government officials to communities have sullied the reputation of CBAs. New York City neighborhoods have become suspicious of agreements that can be (and have been) ignored by behemoths like Amazon, Forest City Ratner, and politicians.

The Barclays Center was created with a CBA. The new Yankee Stadium came with a CBA. And, the current talk about a Bronx professional soccer stadium includes conversations focused on perks promised to the host neighborhood, like jobs and housing for local residents. But the promise of perks never convinced Queens that the Amazonian tech giant and the world’s wealthiest man were worthy of their support.

Civic groups in Queens like those in the Bronx and Brooklyn have become disillusioned because these benefits agreements lack enforcement. At Yankee Stadium, members of the community board who opposed the new ballpark and its CBAs were removed from the board. In Brooklyn, small businesses feel ripped off by the developer whose community benefits promises lacked the force of law and transparency. In Queens, local elected officials were left out of the negotiations by the mayor and the governor.

ESOPs have been around since 1956. Across the country, there are nearly 7,000 ESOP companies covering more than 14 million participants. In ESOPs the workers earn the right to buy shares in the company at a discount rate based on the number of years they have worked there. These worker-shareholders have a seat on the company’s board. Profits are shared with employees through dividends and increases in the stock price. Transparency abounds, and so does workplace satisfaction.

The ESOP model can be modified to reflect and reinforce lots of different stakeholders, not just employees. It can become a mechanism by which residents, local businesses, employees, and civic organizations become partners with, not opponents of, a developer.

This is how a Neighborhood Stock Ownership Plan could work: those who live, work, or own a business in the development area will be given stock options based on the length of time they’ve lived, worked, or operated a business in the project district. Nonprofits in the vicinity would also be gifted shares based on their membership. Instead of agitating, NSOP members will be aggregating money, based on the revenues of the company and its stock price.

This NSOP will protect communities from having to settle for corporate hand-outs. It will tie the community and the corporation together so that revenue for the company automatically means money for the community.

If a soccer stadium were built in the Bronx, for example, an NSOP would mean that broadcast fees, stadium naming rights, and merchandising deals benefit those whose transportation, trash, and tranquility will be impacted by the sports venue. Using an NSOP framework would give neighbors and newcomers a common ground to discuss corporate policies and procedures. With an NSOP, the dynamics of patron and patronage that created hostile environments for Amazon, Barclays, and likely a new soccer stadium could be avoided.

Will the stadium developer, the team owners, the mayor and the governor have the foresight to reject the old “community benefits” strategy and try a new approach? Will they see the soccer stadium project as a chance for social innovation and community support? Seems to me like a good goal (pun intended) for everyone.