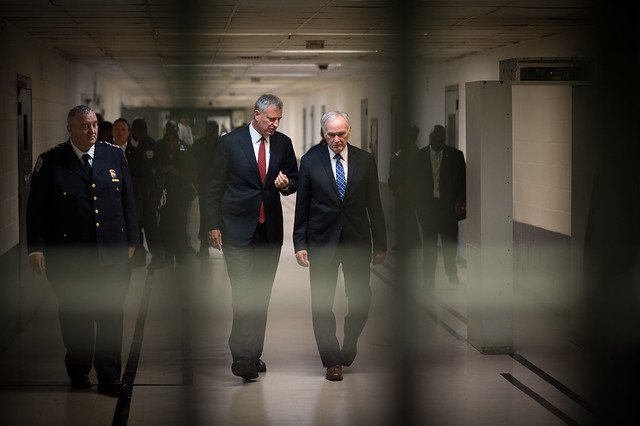 Not long ago, closing the Rikers Island jails was a radical idea. Today, however, less than four years after we launched the #CLOSErikers campaign, New Yorkers have reached political and popular consensus that closing the jail complex is morally imperative. Yet, they are increasingly opposed to Mayor Bill de Blasio’s visionless approach to executing this important mission. Today I write to join that opposition.

The purpose of the #CLOSErikers campaign was not only to shut down a horrific penal colony, but also to decarcerate New York City and spur investment in communities most harmed by mass incarceration. Our principal target was Bill de Blasio, who as mayor oversees the city jails and is empowered to close them.

From the beginning of 2016, we pursued the mayor across the city, in the streets, and at City Hall, in the press and through social media, at his fundraisers and even at his gym. Closing Rikers became a rallying cry for progressives, and then a mainstream political position.

In April 2017, Mayor de Blasio reluctantly announced that Rikers would close. We celebrated that moment as a major step forward, but not as a win, given the scant details in the mayor’s plan. Though I am no longer with the campaign, I have watched for the past two years to see if the mayor’s plan could be improved to match the values of today’s criminal justice reform movement. Despite fierce pushing by advocates, as of Tuesday's City Planning Commission vote, this administration does not have the right plan to close Rikers.

First, the mayor’s plan projects the need for too many jail beds.

The historic and comprehensive pretrial justice legislation that advocates got passed in Albany six months ago, and that takes effect in January, may halve the number of New Yorkers in jail.

Second, the mayor’s plan doesn’t significantly change the culture of Rikers -- retaining the use of solitary confinement, and not holding the Department of Correction accountable for continued violence at jails across the city.

Third, the mayor is simply not engaged. It’s easy to mock Mayor de Blasio for his lonely trips through Iowa and New Hampshire, but it has now been months since the mayor addressed criminal justice reform, and he has apparently neglected to even assign a deputy mayor to the mammoth project of closing Rikers.

There was a time when Mayor de Blasio’s borough-based plan, for all its flaws, seemed like the best and only chance at closing Rikers. But the politics of Rikers and the politics of New York have changed. Every known 2021 mayoral candidate is for closing the Rikers jails. With a stable Democratic State Senate, we can keep improving the broken laws that led to our current system. And across the city, voters are demanding reform from their district attorneys. As circumstances shift, our policy on what is best for New Yorkers must evolve.

As a city, we can settle for Mayor de Blasio’s eight-year, $10 billion plan, or we can push him to generate a better plan that invests billions into helping communities directly, doesn’t have towering jails, and reforms the Department of Correction. It’s not too late, we still have a choice.

Here’s a different path forward, some of which can be demanded by the City Council through the land use review process (ULURP) that is only part-way through and now in the Council’s court:

First, dramatically reduce the number of projected jail beds, including exploring options that would require no new jails to be built and improve conditions at existing non-Rikers facilities.

Second, make a serious financial investment in community-based mental health centers where people can get treatment outside the jail setting, and allocate more funding to transitional housing.

Third, divert people otherwise sentenced to misdemeanor jail terms to programs that can help them get their lives on track.

Fourth, properly implement bail, discovery, and speedy trial reform in 2020, which will dramatically lower the number of New Yorkers in our jails.

Fifth, pass parole reform next legislative session in Albany, which will dramatically reduce the number of New Yorkers in city jails for technical parole violations.

Seventh, demand that our elected district attorneys treat jail as a last resort.

These solutions will be better for our community and improve public safety in the long run, without building huge new jails.

Finally, I commend the Herculean work of advocates, directly impacted people, City Council members, and even certain de Blasio administration members for working to close Rikers, including those who have sought to improve the borough-based jails plan. We are in this together as a city.

We only get one chance to close the Rikers Island jails, and we can do better. Mayor de Blasio and the City Council should act boldly to reimagine criminal justice in New York City.

***
Janos Marton is campaign manager for the ACLU Smart Justice Campaign and a 2021 candidate for Manhattan District Attorney. He managed the #CLOSErikers campaign 2016-2017. On Twitter @janosmarton.