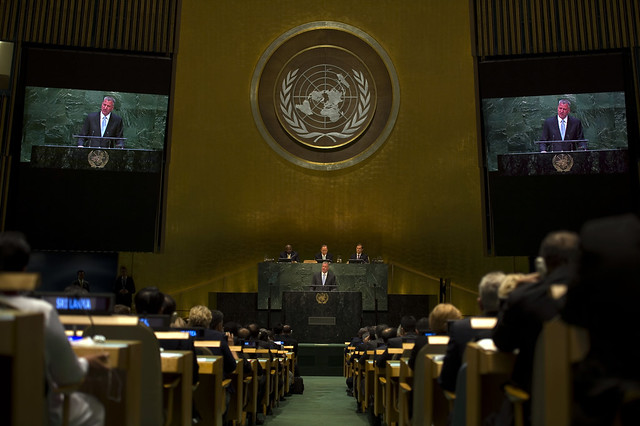 For many New Yorkers, the annual wave of United Nations events, set to start again this week, can be a nightmare: jam-packed subways, bottlenecks on the FDR Drive, and crowded sidewalks that slow our steady gait to a maddening crawl.

What most New Yorkers may not realize, however, is that hosting the UN boosts our economy, draws desirable traffic to local businesses, and elevates city diplomacy on the world stage — and that’s a boon for all of us.

Since 1946, New York City has been the proud, permanent home to the UN and its promise to make the world a better, more peaceful place. We play host to 193 Permanent Missions, over 70 trade missions and 116 consulates – the largest diplomatic community in the world.

With one in three New Yorkers being foreign born and over 200 languages spoken throughout the five boroughs, our city naturally has a special connection to the UN’s member states. Thanks to this enduring bond, New Yorkers actually have a voice on global issues such as human rights, migration, and climate change. We are stalwarts of the UN’s mission to protect and serve a thriving, fair, and just world nation.

The fact is, with record low unemployment, our city has never been more prosperous and the UN community has been part of that success. The UN Headquarters has contributed $3.69 billion to our city’s economy and created thousands of jobs for New Yorkers, according to a 2016 report by the Mayor’s Office of International Affairs and the New York City Economic Development Corporation.

The United Nations is much more than the sum of its economic impact, of course. New York City is living out the mission to achieve the UN’s Sustainable Development Goals (SDGs or Global Goals) by 2030. First launched in 2015, these global targets for fighting poverty, promoting health, and protecting the environment are crucial to all of our futures. The Mayor’s Office for International Affairs has been using the Global Goals framework to showcase our city’s innovations in sustainability with cities and countries around the world.

The global community looks to the U.S. for sound public policy and New York City is leading the way. We’ve learned a lot from other nations as well; innovations in climate, gender equity, and education aren’t limited by borders.

Our children are also benefiting from our international ties. With the support of other city agencies, and in partnership with the United Nations, the Mayor’s Office for International Affairs runs the award-winning Junior Ambassadors program. Over the last four years, thousands of young New Yorkers from across our city have gotten a firsthand look at global politics and learned how they can live out the Global Goals in their own communities.

So congestion and street closures aside, it’s important to stay focused on what truly matters: that when it comes to the local economy and our standing with communities across the globe, the United Nations is good for all of New York City.