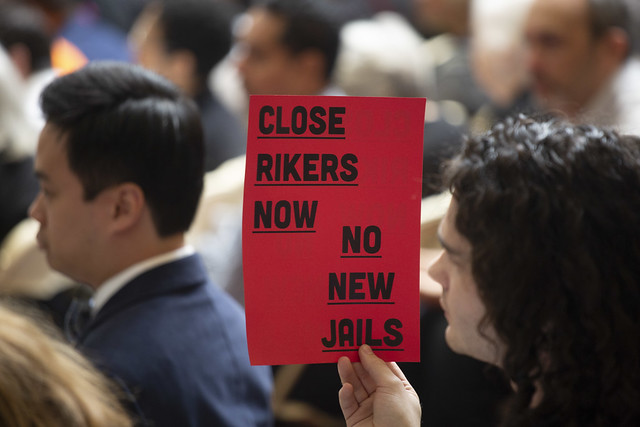 While not surprising from a political perspective given Mayor de Blasio's support for the plan, the City Planning Commission's recent vote to approve the very costly (about $9 billion current estimate) construction of new jails for the worthy purpose of closing the deeply inhumane facilities on Rikers Island was wrong and wrong-headed.

As the City Council now considers the four-jail plan, one in each borough but Staten Island, it should recognize that the city can take the much smarter and cheaper course: sufficiently reduce the overall jail population so it can close the Rikers jails and house the remaining imprisoned New Yorkers in the already-existing borough facilities, which have the capacity to hold about 3,000 people.

Here's how and why:

About 70% of the approximately 5,000 New Yorkers confined on Rikers are pre-trial detainees, presumed innocent under our system of justice, locked up mainly because an NYPD officer has arrested them and they are too poor to afford even the low bails set on them. The major bail reforms passed in Albany earlier this year will, as of January 2020, substantially limit the kinds of cases where judges can apply bail, thereby contributing to a significant reduction in the number of people remanded to Rikers.

None of the many sentenced people confined on Rikers have been convicted of serious offenses. If they had been, they would have been sent to a state prison. Many of them serve terms of 90 days or fewer. The city could readily find alternative ways to respond to most, if not all, of their cases.

In addition to ending "broken windows" practices, the city should jettison the NYPD quota system that puts pressure on officers to make a prescribed number of arrests and stops and to issue a certain number of summonses in order to earn positive job evaluations and to qualify for promotions and sought-after posts. While NYPD brass deny the existence of quotas—they are illegal, after all— a number of whistle-blowing officers have attested publicly (and privately to PROP representatives) about their use and the consequent harmful effects on cops and the community.

The Department is known, for example, to sanction officers who do not "make their numbers" by assigning them to precincts far from their homes -- dubbed "transportation therapy" -- or by denying them time off even for family emergencies.

The city could and should establish a task force accountable to City Hall that monitors court case processing. New York City's legal culture permits our courts to move much more slowly than other municipal systems in our country. The task force can, for instance, put pressure on judges to limit the number of court appearances per case as a way to prevent the longtime incarceration of detainees -- the tragic case of Kalief Browder comes to mind -- as they await disposition of the charges against them.

As city officials talk up new “modern” jails, the famous George Santayana quote is noteworthy here: "Those who don't remember the past are condemned to repeat it." I have worked on prison and related issues for nearly 50 years and cannot recall a single instance in history where promises that the new proposed facility will break the cycle of corruption and abuse that plague jails has become reality.

Opened in 1931, Attica was the most expensive prison in the world, advertised as being equipped with all available modern amenities and as being safe and humane. Similar claims were made regarding Rikers Island when the city opened jails there in the 1930s.

People now claiming that the proposed new jails, run by the same Department of Correction and personnel responsible for Rikers, will not feature the same harsh and perilous conditions of confinement as Rikers are drinking an age old Kool Aid -- some are engaged in pouring it.

Closing Rikers without spending billions of dollars on unneeded new jails —under this no new jails plan the city will have to allocate some funds to fix up, and improve conditions inside, its existing borough facilities—will not only remove from our great city's landscape the stain of operating notorious Rikers jails. It will also eliminate some of our police and criminal justice systems' abusive and discriminatory practices that inflict harm and hardship on vulnerable New Yorkers every day. Our city will be a better place for it -- more just, safe, and livable for all our people.