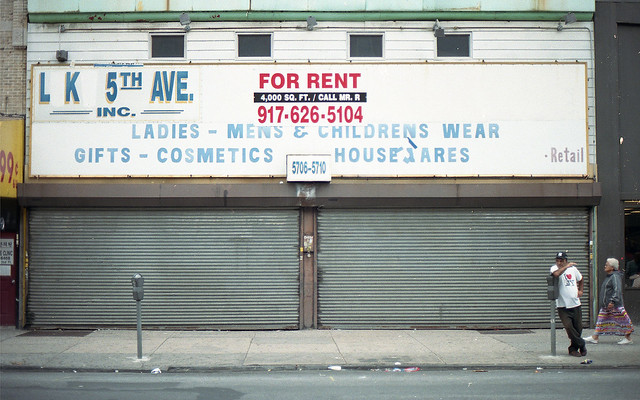 As a small business owner in New York City for 11 years, I believe it is imperative that city officials reframe the current debate over whether or not we face a small business crisis. In an August column for Gotham Gazette, Carol Kellermann used the results of a recently-published New York City Department of City Planning report on storefront vacancies as well as observations of her Upper West Side neighborhood to assert two conclusions: there is no citywide small business crisis and therefore the City Council should not enact citywide legislation to address a problem found in a small number of neighborhoods.

But the City Planning report data does show great struggle for small businesses and both the column and the report fail to capture the link among vacancies, small business closures, and the loss of neighborhood vitality and affordability.

The report pulls data from a nine-month average between 2017 and 2018 in 24 shopping corridors and uses an “industry standard healthy vacancy rate” of 5-10% as its benchmark. Putting aside the question of whether or not that is the best benchmark, the report found that 15 of 24 corridors studied - a majority - had vacancy rates above 10%. Across these 15 corridors, the average vacancy rate was 14.94%.

The question then should not be what number of high vacancy corridors constitutes a crisis but what do small business closures and high vacancies mean for neighborhoods and New Yorkers seeking work?

If for a case study we look at Williamsburg, one of the 24 retail corridors studied and with a reported vacancy rate of 16.6%, we can find two important answers: one, vacancies can mean a decline in access to useful goods and services that serve the neighborhood’s interests and means; and two, vacancies can mean a loss in high quality service and retail jobs.

To the first point, I closed my successful kitchenware shop in Williamsburg this April because my landlords demanded a 44% rent increase in order to renew for only five years (with 3% annual escalations). At the end of my 10-year lease I was already paying $18,452 per month for my 1,450 square feet. And I could afford to pay that because we had many loyal customers. We were not suffering from online retailers.

I would have paid $20,000 per month to stay, arguably a high rent, but the landlord demanded $26,500. The space has now been divided into three retail units, two of which are occupied. The largest is a ‘modern wellness’ business that offers whole body cryo and an oxygen bar. Whereas you could come to my kitchen shop and spend as little as $24 on a frying pan for daily cooking, now you can purchase a 3-minute cryo session for $75.

There is nothing wrong with any of these businesses. The problem is when too many businesses in a neighborhood are like these; when access to useful services and goods diminishes because they are replaced by too many luxury brands, too many duplicative services, and too many uninviting chains. A non-stop refrain from upset customers in our final days was that they “didn’t like their neighborhood any longer”.

Neighborhoods are ecosystems in which residents and services interact in an ongoing exchange of trades. But when trades diminish because fewer affordable and necessary goods are available, the ecosystem weakens. That fragility is exemplified by buyers turning more to online shopping (with all its attendant waste and pollution) and by residents being priced out of their neighborhoods.

To the point that vacancies can mean a loss in high-quality service and retail jobs, when I closed Whisk, seven staff lost their jobs and several are still seeking stable employment. Kellermann cites the loss of a beloved diner in her neighborhood which then sat vacant for two years. That two years represents meaningful unemployment for our neighbors, friends, and maybe family. It’s also about the quality of small business jobs. By virtue of being small, we can apply a sales associate’s talent for photography, numbers analysis, or web design to the business in ways that chains simply can’t.

Kellermann concludes that rents will come down so we don’t need citywide legislation now. Rents have softened in select areas but being down does not equal affordable. If a 1,000-square-foot space drops from $350 per square foot to $300 per square foot, it is still $25,000 per month. How many retailers or bars generate revenues to afford that? Not many. Moreover, small businesses are usually designed to provide a particular service in a particular neighborhood. They cannot simply pick up, finance a relocation to a new corridor or even side street, and recreate that market.

Citywide policy is absolutely needed to reframe this debate. Imagine how different Williamsburg would be in 2019 if we had had a zoning purview to limit chain retail; if we had been bold enough to talk about commercial rent stabilization; if we had mandated mitigation measures to protect against commercial and residential displacement?

Cities like San Francisco and London are having these conversations. New York absolutely needs to get ahead of understanding what vacancies mean for our neighborhoods.

***
Natasha Amott is the owner of Whisk, in downtown Brooklyn. On Twitter @Natasha_Amott.