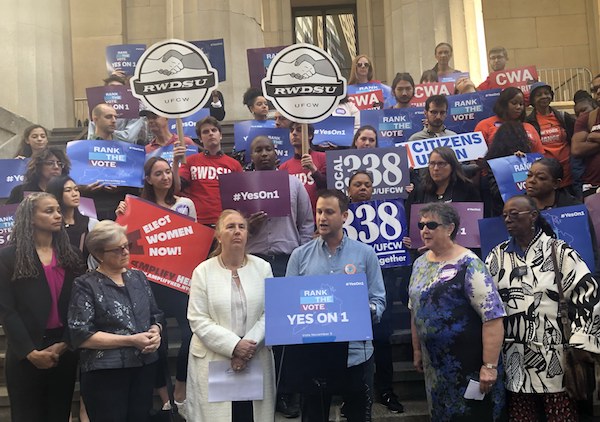 At Empire State Indivisible, lowering the barriers to engage in our representative democracy has always been the guiding light for our organizing efforts. It is why, in coalition with grassroots organizers across the state, we fought so hard to engage voters to defeat the former members of the Independent Democratic Conference and then to elect a true Democratic state Senate majority in Albany. And it is why we continue to work so closely with allies to deliver critical voting and campaign finance reforms at the state level. Simply put: we need to expand the electorate and strengthen our representation in the face of increasingly hostile and emboldened attacks on our democracy.

This fall, New York City has the opportunity to go one step further. Voters across the five boroughs have the opportunity to once again lead the state forward by embracing a ranked-choice voting system through a “yes” vote on ballot proposal 1.

Ranked-choice voting will uplift and strengthen the voices of everyday New Yorkers while encouraging a diverse set of candidates who seek to represent their full constituencies. And it’s critical we recognize the additive power of those two outcomes.

The last two years have shown the promise of progress that is enabled by candidates who get elected based on grassroots organizing and an engaged constituency. Much attention has been focused on the election results themselves. But it was also the commitment to organizing post-election and the prioritization of constituent advocacy from those electeds that led to a string of massive results this past legislative session in Albany. In other words, an engaged constituency is the single most powerful enabler of progressive democracy.

Ranked-choice voting rewards those who recognize the power of this virtuous engagement cycle.

Ranked-choice voting also has the power to excite those who may have previously sat on the sidelines. Elections are about choice. But far too often, elections become about divisiveness. We have heard time and time again during our canvassing of the city and state that our elections have become too divisive. The negativity is driving away otherwise active community members and we can’t afford to keep up that trajectory.

By enabling New Yorkers to choose multiple candidates by ranking their preferences in a crowded field, we can envision a more productive and more positive approach to our elections; candidates will seek to appeal to more voters and run more positive campaigns about vision and progress. One in which candidates recognize the power of their shared views and embrace the power of organizing around ideas instead of power.

We believe New York City is best when it leads. And we believe ranked-choice voting leads to the right incentives for a healthy and engaged democracy. One of the victories achieved through the new state Senate majority is the early voting system that will be launched starting this October, providing voters the chance to cast their ballots more conveniently.

***
Ricky Silver is co-lead organizer of Empire State Indivisible. On Twitter at @es_indivisible.