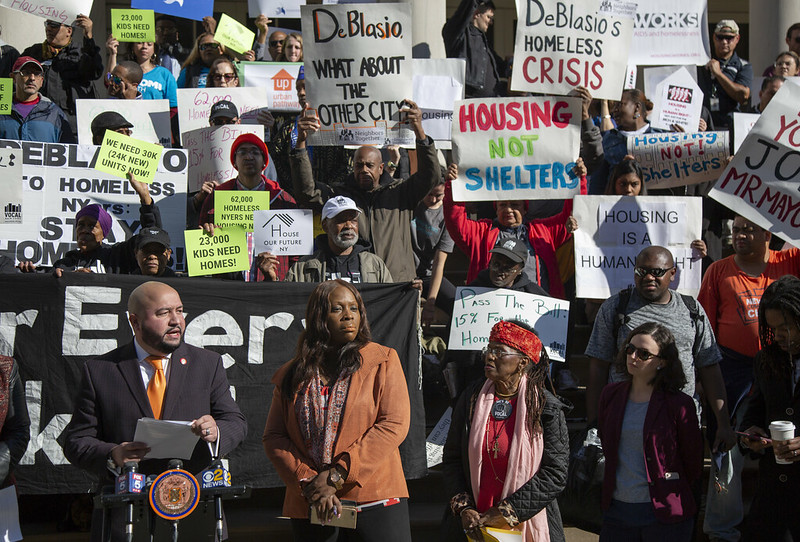 The authors and others at a rally (photo: John McCarten/City Council)

More than 61,000 men, women, and children will sleep in New York City shelters tonight, and this historic homelessness crisis will continue to devastate the lives of even more people unless Mayor de Blasio embraces the common sense plans that we have put forward from a City Council office and the Coalition for the Homeless, respectively.

The record number of homeless New Yorkers will continue to reach new highs every year, according to the latest report from the Coalition. In stark contrast to Mayor de Blasio’s predicted decrease in the shelter census of a mere 2,500 people by 2022, the Coalition’s analysis shows that the number of city residents living in shelters will increase by 5,000 people in that time period.

While the mayor often touts the work his administration has done to prevent homelessness and protect tenants, his failure to meaningfully reduce the shelter census is a direct result of the lack of truly affordable apartments created specifically to house homeless New Yorkers. This is why the House Our Future NY Campaign, with the support of the majority of the New York City Council, has spent more than a year and a half calling on Mayor de Blasio to make his Housing New York 2.0 plan -- badly in need of a third iteration -- address the true scale of the homelessness crisis.

To address the housing needs of our homeless neighbors, the House Our Future NY Campaign, formed by the Coalition and 66 partner organizations, urges Mayor de Blasio to create 24,000 apartments through new construction (about 20 percent of all planned new construction in Housing New York 2.0) and preserve at least 6,000 more units for a total of 30,000 apartments for homeless New Yorkers.

In the Bronx, we have seen how the issue of homelessness impacts people firsthand. Many hurtful and false narratives have been spread about people in the shelter system, primarily that individuals are unemployed or are looking for handouts. To the contrary, many in the system have full-time jobs or are living on fixed-incomes and turn to the shelter system as a last resort because of rising rents in their communities. Once in the system, people face a lengthy wait to be placed in permanent housing due to a lack of truly affordable housing.

To address this issue and the staggering number of individuals and families in the shelter system, we introduced legislation, Intro. 1211, which requires all new housing developments that receive city financial assistance to set aside at least 15 percent of new apartments for homeless households.

Working together to raise awareness on this proposal, Intro. 1211 has secured a veto-proof majority of Council members signed on as co-sponsors, as well as the support of Public Advocate Jumaane Williams. While an overwhelming number of homeless advocates came out in support of the bill at a public hearing held in December 2018, the de Blasio administration declared its opposition to the bill, citing financial concerns. But we have demonstrated that more affordable housing can be built for homeless New Yorkers than is conceptualized in the mayor’s plan.

Starting in April 2018 while drafting the language for Intro. 1211, we began requiring developers who were looking to build housing in Council District 17 in the Bronx to set aside a minimum of 15 percent of developed units for homeless individuals and families. Despite the administration’s insistence that the financing would not work, we were able to secure a 15 percent homeless set-aside in every new construction project that required our Council approval.

In total, our Council office approved 121 new set-aside units over eight projects. While this number of units is a drop in the bucket of the overall need for our homeless population, it shows the impact this legislation could have in changing the tide on homelessness if implemented across New York City.

We are pleased that Intro. 1211 is already having a positive effect on the movement to build more housing for homeless people. Many Council colleagues have begun requiring a 15 percent set-aside minimum in projects in their own districts. With a citywide policy to substantially increase new housing built for homeless New Yorkers, we would be able to move more people out of city shelters and achieve the goal of reaching the 24,000 new units the House Our Future NY Campaign is advocating for.

We cannot continue to accept mass homelessness in our city as a fact of life. We have the means to alleviate the suffering of tens of thousands of homeless New Yorkers by building more deeply subsidized affordable housing to match the scale of the need. In addition to being the moral thing to do, the New York City Council has demonstrated through its support of the House Our Future NY Campaign and Intro. 1211 that it is entirely feasible. Now it is time for Mayor de Blasio to finally address the ongoing homelessness crisis with the best tool available: building new affordable apartments for homeless New Yorkers.