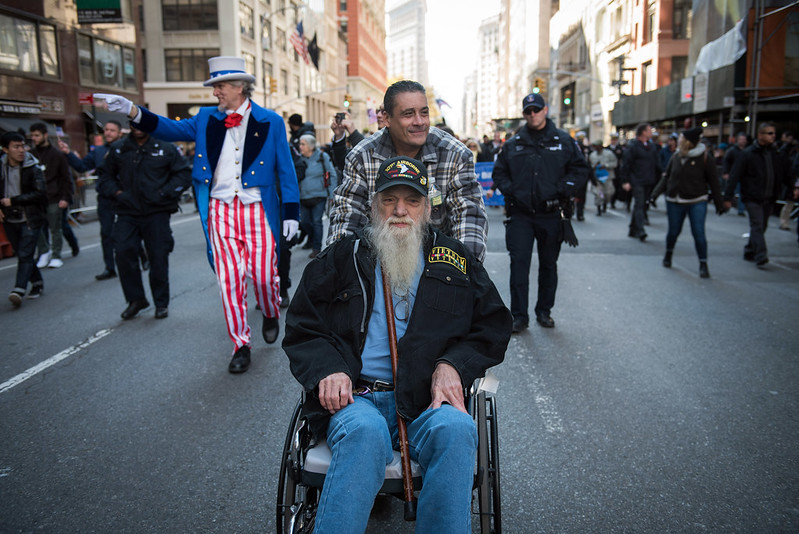 Each year around Veterans Day there’s a predictable pattern as politicos of all stripes march in parades and roll out proposals to thank and support our military veterans and their families. Little may come from all this activity, at least until Memorial Day, when, once again, there’s renewed focus on veterans and their survivors. It doesn’t have to be this way and it shouldn’t be this way, particularly in New York.

A report released earlier this year from the New York City Bar Association suggests New York’s veterans, when compared with their national counterparts, are not getting their fair share from Washington, D.C. Specifically, veterans in New York are not getting their fair share of veterans benefits from the U.S. Department of Veterans Affairs, commonly known as “the VA.”

At first blush a difference of seven or eight percent below the national average might seem statistically insignificant, however nothing could be further from the truth as there’s real money at stake. Over 100,000 low-income and disabled veterans in New York receive over $2.5 billion every year in financial support from the VA. These veterans either are unable to work or have some type of health condition that impacts their ability to hold “substantially gainful employment” as that phrase is understood as a matter of law.

These are our veterans who are most in need. Yet the report from the New York City Bar Association suggests there are tens of thousands of additional New Yorkers who should be receiving these benefits.

Practically, if New York’s leaders don’t insist Washington pay its fair share for the veterans it creates, the burden for the care of these veterans falls upon New York City and New York State taxpayers, who are already paying for VA benefits in their capacity as federal taxpayers. State and local tax revenue that should be going toward education, roads, and public goods are instead being appropriated to take care of low-income and disabled veterans who are, legally, the responsibility of the federal government.

New York leaders should be relentless in demanding every low-income disabled veteran who is entitled to benefits from the VA receives those benefits, even if obtaining them requires the assistance of an attorney. The New York City Bar Association’s report provides a roadmap and outlines steps to tackle the problem that should be revenue neutral, if not revenue positive, for New York and its taxpayers.

These steps include: providing funding for attorney representation on veterans benefits issues outside the scope of traditional general civil legal services; ensuring there are attorneys in adequate number to address the staggering demand; and making sure attorneys doing the work are evaluated on their cost-savings to New York taxpayers.

Each year around Veterans Day there is a great deal of talk about the importance and the value we place on the service of our veterans. New York leaders should back up that talk with real steps to assist not only our low-income, disabled veterans but also New York taxpayers by assigning the fiscal responsibility for low-income and disabled veterans to whom that responsibility rests: the U.S. Department of Veterans Affairs.

***
Kent Eiler is an attorney, the project director of the City Bar Justice Center’s Veterans Assistance Project, and a Major in the United States Air Force Reserve. The views expressed in this article are solely those of the author in his personal capacity and do not reflect the official policy or position of any military service, the Department of Defense, or the U.S. Government. On Twitter @KentEiler.