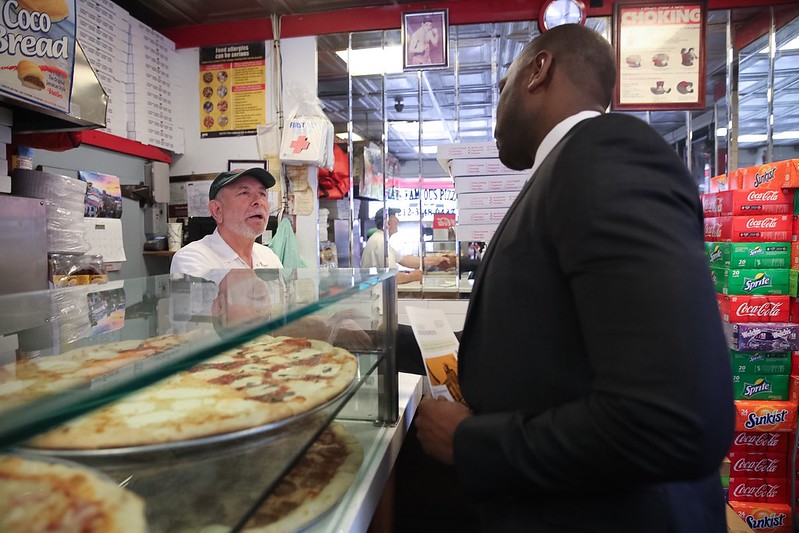 As the owner of a small retail shop it is stomach-churning to publicly state that I do not support a piece of city legislation that would mandate 10 days of annual paid leave for all working New Yorkers at businesses of five or more employees and comes in addition to the mandated five paid sick days assured under the 2014 Paid Safe & Sick Leave law.

I believe paid time off is a just right and I am a fierce defender of my staff. Contrary to the words used by Mayor Bill de Blasio in stumping for this bill, I do not see my employees as mere “cogs in the machine.” But while rents, real estate taxes, and regulatory compliance costs remain so high, small businesses simply can’t afford increased payroll.

We must call on the City Council and the Public Advocate to help lift up what is actually working in our communities instead of mandating higher costs to doing business. The plea is simple:

First, understand the economic impact of 15 paid days off on the operational costs of small retailers, restaurants, bars, grocery shops, hair salons, and other service providers that cannot delay or pass off projects when an employee is out.

In my retail shop of 10 mostly full-time staff, paid leave time ranges between five and 13 days, including the mandated five paid sick days (which staff use for sick or vacation time). If the paid vacation time bill (Int. No. 800-A) is to pass, my annual payroll costs would increase 2.9 to 4.1%. If you don’t know that this is a meaningful increase, you do not run a small business.

Unlike an office, retailers only make money when we are open and staffed. When an employee takes paid time we fill the shift with another employee. This means paying two people for the same shift and often paying one shift at overtime rates. I have accepted that as part of the cost of doing business, but the payroll jump that this bill contemplates may eliminate our annual bonus pool and/or cause wage stagnation.

We simply cannot pass on these costs to our customers because it is their limited ability to afford the goods, meals, or services sold that matters most to our success.

Second, understand the data being used to decide this critical legislation and who is actually at risk.

When businesses raise concerns about this bill, the mayor and Public Advocate Jumaane Williams, who has been its lead sponsor since he was a City Council member, typically pivot to two data points. First, they claim that the impact on business is overblown. They cite a study conducted by the Center for Economic Policy & Research at CUNY on the impact of paid sick leave, which concluded that the law has been “no big deal” for the 382 businesses interviewed. Only a minority of respondents in this study fit the category of small retailer, restaurant, bar, or grocer, however. This is borne out by the study’s finding that 84% of respondents relied heavily on two means by which to handle paid sick days: put the work on hold or temporarily assign work to other employees; two options that retailers and hospitality businesses simply don’t have.

In 2019 the NYC Hospitality Alliance did its own study, interviewing several times more hospitality and retail businesses about the impact of paid sick leave. It showed 49.6% of these businesses said that paid sick leave has cost their business significant additional money, and 81.1% claimed that they pay another employee when one takes a paid day off. Perhaps most tellingly for the future of small business growth, 58.7% stated that these costs have prevented them from reinvesting in their business.

The second key point is real stories from working New Yorkers who talk of being fearful to ask for just one paid day off. These are sad stories but they involve employers who are not even abiding by the paid sick leave law. Let’s not lose sight of what most small businesses do to support the well-being of their staff.

Third, recognize that this bill would weaken the competitive edge of small retailers in the most expensive city in the country.

I am not aware of any city in the world that mandates paid vacation time without it being a federal mandate. To face increased payroll costs at a time of disruption from online retailers is untenable.

Recent reports from the Department of City Planning and Comptroller Scott Stringer demonstrate a rise in vacancy rates and cite retail rents, property taxes, and regulatory burdens as significant drivers of this reality. The Comptroller links vacant storefronts to lost job opportunities and income for New Yorkers. At the same time, a recent New Yorker article depicts poor working conditions for employees of Amazon and a recent New York Times article highlights incredible congestion and pollution resulting from the city’s growing reliance on quick deliveries.

What do we want our city to be? There have got to be better models than that of Amazon and the answer is to help incubate local ones.

Fourth, fund paid leave by means other than a mandate on small employers.

It is imperative that we look at other means by which to fund paid leave. First, consider that total income (profits) is a better determinant than employee number for gauging which businesses can afford mandated leave. Second, look at established models like New York state’s paid family leave law. All New York City employees could contribute a tiny percentage of each paycheck to fund a paid vacation benefit.

Using total income as a determinant, small businesses could receive an annual reimbursement calculated at some percentage of total payroll costs incurred. Yes, this would take time and no, this would not be simple. But this is exactly what we expect of our elected officials - to never be afraid to do what is hard.

***
Natasha Amott is the owner of Whisk, in downtown Brooklyn. On Twitter @Natasha_Amott. She can be reached at This email address is being protected from spambots. You need JavaScript enabled to view it.