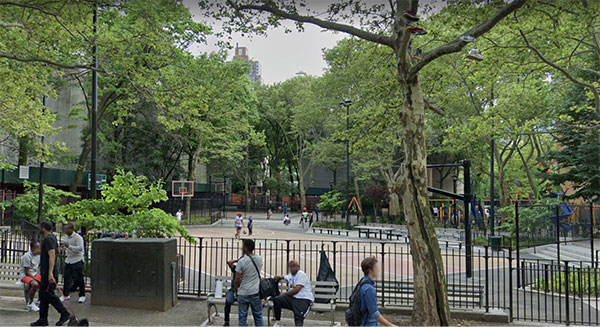 Samuel N. Bennerson 2nd Playground could be a model (Google, 2019)

New Yorkers have been building parks in the most unexpected places. Popular parks have risen over rotting piers on the waterfront; on an elevated and abandoned rail freight line; and even in the middle of busy traffic intersections in Times Square. Many skeptics doubted that anyone would want to sunbathe along the East River, eat a snack in the middle of Times Square, or walk on a rickety steel structure 30 feet above the streets. The skeptics were wrong. Millions have flocked to new spaces in strange places.

There is an even larger and more accessible reservoir of untapped space for new city parks: the thousands of acres of lawns and trees that surround NYCHA towers. NYCHA developments are often 70 or 80 percent open space; yet much of this open space feels unnecessarily isolated from vibrant avenues and neighborhoods.

The volume of land available for new parks within NYCHA, if redesigned as “activated” neighborhood parks, could have a transformative impact on the city’s quality of life.

The Regional Plan Association, for instance, in TIme to Act, has highlighted the potential: “There are several places where NYCHA open space and NYC Parks open space could be combined into a larger community asset managed by the Parks Department. This would allow NYCHA to benefit from the City, and the City to benefit from NYCHA.” 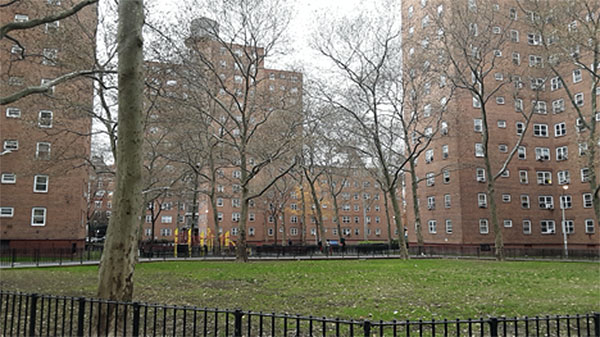 Johnson Houses, like most NYCHA projects, has open space and tree cover that reduces temperatures and encourages air circulation. But is this the best we can do for city or NYCHA residents? (photo by the author)

Good Intentions; Lost Promise
For NYCHA’s founding designers and administrators (in the 1930s), the space around towers served primarily as a conduit for air and light to resident apartments. Public housing was a powerful tool for attacking congested tenement neighborhoods; open spaces were an afterthought.

Landscape architects limited recreational uses to passively enjoyed greens with benches and small playgrounds for the little ones. Active recreational elements such as large ball courts or fields were added later and only sporadically under pressure from residents and recreation specialists. Parks Commissioner Robert Moses, in fact, lambasted NYCHA administrators for failing to provide enough active recreation; he made a point of putting a few NYC Parks adjoining, and sometimes inside, NYCHA superblocks.

When NYCHA projects were full of young families, and crime was low, kids and seniors lived an enthusiastic and reasonably successful outdoor life (from the 1930s to 1960s) on the grounds between the towers. In an era before air conditioning, summers were particularly active on NYCHA properties.

A changing city and society, however, undermined the original logic of providing such vast open spaces. Rising crime and gang territoriality cut into the liveliness of NYCHA outdoor spaces from the 1960s onwards; many concerned families kept their kids indoors for safety. Air conditioning and electronic entertainment kept children and families inside even when safety wasn’t an issue. Many green areas were poorly maintained or paved over as other maintenance priorities emerged. Neighbors stayed out due to fear, even when NYCHA spent millions on new play equipment, benches, paths, fences, and fountains.

The 710 playgrounds still run by NYCHA directly have been a sore point for managers. The pressure to maintain multiple play areas within a single development not only reduces the density of children on equipment (reducing the fun!), but demands a level of maintenance staffing NYCHA has struggled to maintain due to federal budget cuts. Nor does NYCHA have a recreation staff that can draw in non-NYCHA residents to events or activities. 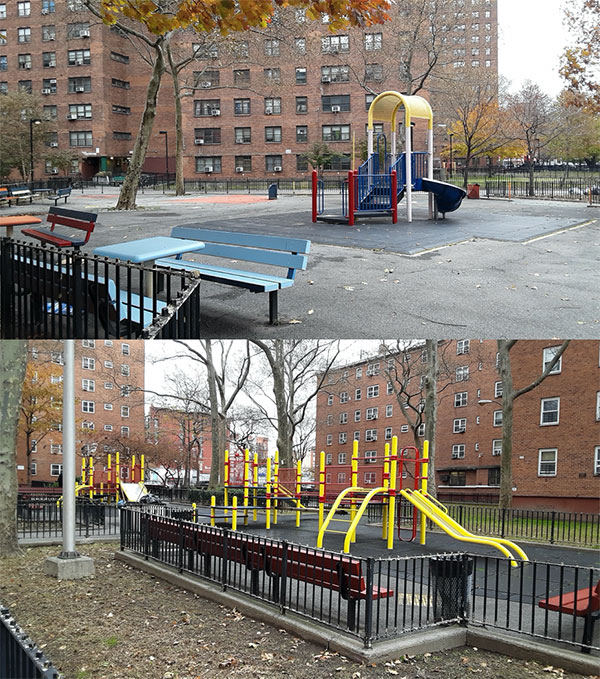 A City Parks Network in NYCHA: Building on a Tradition
There are solid reasons to believe that a new network of NYC Parks on NYCHA open spaces will be a success for the simple reason that many NYC Parks have thrived for decades in NYCHA settings.

The Samuel N. Bennerson 2nd Playground of Manhattan’s Amsterdam Houses, for instance, has been an NYC Park since it opened in 1949: “The property, three-quarters of an acre in extent, was acquired by the New York City Housing Authority and is for the families in the project and the residents of the surrounding congested community,” wrote the New York Times in 1949. The language of shared facilities -- between NYCHA and the surrounding community -- is reflected today in the edge location. The Parks Department started with playground equipment there and added basketball facilities in 1982. 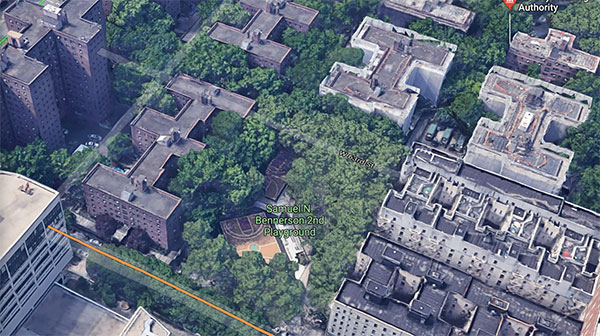 NYCHA buildings surround Bennerson on two sides, but the park fronts an active street that helps draw in outsiders. (Google) 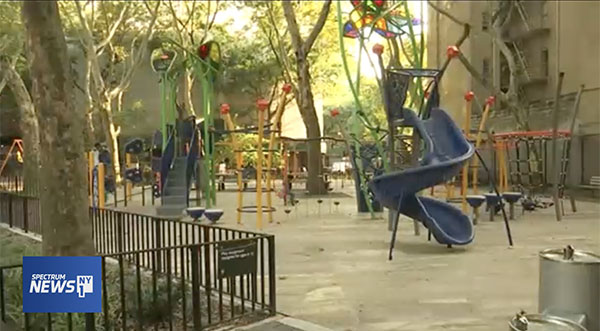 The Parks Department let Bennerson decline, but NYCHA residents and community leaders demanded upgrades. The park’s recent renovation was a multi-million-dollar project of former Upper West Side City Council Member Gale Brewer (now Manhattan Borough President) and her successor, Council Member Helen Rosenthal. Thanks to city capital funds, the park has been renovated to a high standard with two new basketball courts, a new playground, and cooling spray fountain. Community basketball programs thrive. Above all, the park fronts on a busy cross street and welcomes outsiders through signage and fun design elements.

To get a sense of the impressive, large-scale opportunities presented by NYCHA open spaces, consider Bushwick Houses. There, NYC Parks maintains a pool and playground within the Bushwick development in Brooklyn. The playground stretches along one edge of the development and provides an active, protected edge to the excellent pool complex deeper within the development. There is also a high-quality baseball diamond adjoining the pool. 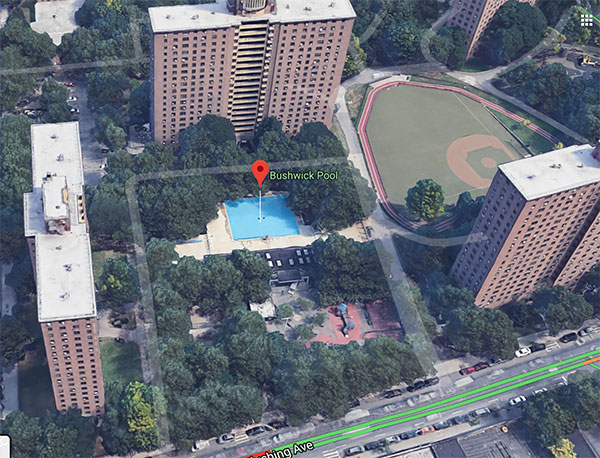 Bushwick pool, playground, and ball field all within a single NYCHA project

Carving out new NYC Parks from the vast NYCHA domain, as these examples illustrate, represents a chance to reknit valuable open space into neighborhoods. The parcels at the edges of NYCHA projects, alongside active streets and sidewalks, stand a good chance of attracting neighbors because these edges feel (and often are) more secure. Adding new types of recreational options, and a NYC Parks label, will send a welcome message to surrounding communities. Many politicians also prefer to support projects of wider benefit: as a result, the parks run by the Parks Department are likely to be better maintained.

New Parks for the Next Generation of New Yorkers
Public open spaces suitable for parks are seemingly scarce in New York City. In 2016, for instance, the city spent $160 million to buy industrial land for a single new Williamsburg park. But city officials have overlooked a more abundant and lower cost source of parkland. NYCHA open spaces are flat, conveniently located for transit, and shovel ready.

NYCHA residents are also likely to support the effort because parks enhance livability. Adding NYC Parks to public housing, moreover, doesn’t preclude future infill, redevelopment, or RAD conversion: there is more than enough land for both new parks and a variety of redesign strategies.

Above all, upgrading selected NYCHA grounds to NYC Parks could be transformational for many neighborhoods lacking in community amenities. Parks could have comfort stations, small stores or kiosks, and for-profit enterprises like climbing walls that would enliven city living and help cover park maintenance. The many activities that animate the Brooklyn waterfront parks (and help defray their maintenance costs) are a great model. Just imagine climbing walls, rinks, small outdoor cafes, new pools, or other facilities that would enliven NYCHA grounds and surrounding neighborhoods. 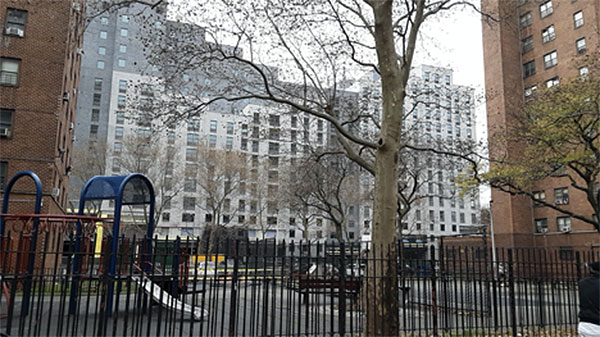 High-quality open spaces are needed more than ever as the city becomes more crowded with buildings and people. The new apartment towers sprouting near NYCHA towers, for instance, contain relatively small apartments and tiny courtyards. Some newcomers may venture into NYCHA projects, but they likely won’t feel welcome or inspired given the infrastructure; many more will trek a long way for a distant park or other neighborhood amenities. Wouldn’t it make sense to upgrade adjacent NYCHA open spaces to help meet the need for recreation on a community-wide basis? Of course it would.

***
Nicholas Dagen Bloom, Professor of Urban Policy and Planning, Hunter College is author of Public Housing That Worked, How States Shaped Postwar America: State Government and Urban Policy, and a co-curator of the HOUSING DENSITY  show.