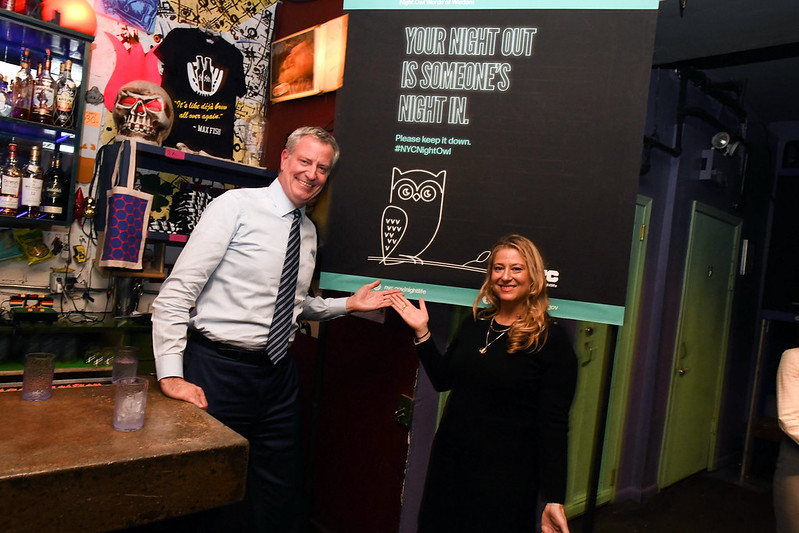 Imagine living in a neighborhood where drunken people are screaming outside your apartment until 5 a.m. (you may not have to if you live in certain parts of New York City). Imagine trying to sleep when your bed shakes from the music playing in the bar three floors below. Imagine waking past empty storefronts that used to be vibrant small businesses. Imagine stepping out to meet friends for a cup of coffee on a crisp fall morning to find vomit on your front stoop. Again.

Now imagine, you’ve spent years fruitlessly asking elected leaders for help. In this reality — a reality shared by tens of thousands of New Yorkers — you might be buoyed by the recent news from the mayor that a solution has finally arrived. Unfortunately you’re about to be disappointed.

Mayor Bill de Blasio and Ariel Palitz, his choice to run the relatively new Mayor’s Office of Nightlife, are congratulating themselves on an initiative to alleviate traffic congestion, trash, and noise in a part of the Lower East Side that has become known as “Hell’s Square” since its transformation into a raucous nightlife destination.

This initiative is a result, in part, of the efforts of New York City residents to convince elected leaders to enact and enforce common-sense liquor laws and to address the trend of neighborhoods like the Lower East Side becoming oversaturated with bars to the point that they become unsafe, unbearable for residents, and nonviable for small businesses.

Formed two years ago, the Office of Nightlife was created to act as a liaison between the city and stakeholders in the nightlife economy. Nightlife is a complex issue where the needs of bar owners, large nightlife operators, landlords, and residents are frequently at odds.

To better understand these issues, Palitz conducted a listening tour in 2018 that consisted of five town halls (one in each borough) where stakeholders were invited to present problems and concerns, as well as ideas and solutions. The initiative in Hell’s Square is apparently a result of information gathered from those listening events. I say apparently because it was announced with no discernible effort to notify residents or community organizations, and without any explanation of the underlying strategy.

For residents concerned about the impact of oversaturation, this might seem worrisome enough. But there’s something far more troubling brewing in the Office of Nightlife: bias, bad faith, and hypocrisy.

Let’s start with the Economic Impact Study (EIS) commissioned by the Mayor’s Office of Media and Entertainment. This report speaks prominently of the positive impact nightlife has on the economy, but the study is egregious in its omissions and appears to have been produced to achieve a preconceived outcome favorable to the liquor industry. It is not a balanced study that examines the full impact of nightlife holistically.

While the EIS thoroughly examines direct and ancillary income generated from nightlife, it fails to explore direct and ancillary costs with equal vigor. For example, a graphic included in the EIS indicates that of the 317 million taxi rides in New York City in 2017, 101 million (32%) are attributable to nightlife.

The authors of the EIS included this chart to demonstrate the economic benefit of nightlife on the taxi industry, but they make no mention of the impact on air quality, pollution, health, policing, road repair, and other costs associated with 100 million cab rides. Nor do they discuss the potential impact of 100 million cab rides on the mayor’s Vision Zero street safety campaign. The omission of any risk or cost analysis associated with nightlife has to have been purposeful and is evidence of highly biased reporting meant to pull the wool over city residents’ eyes.

Another Office of Nightlife initiative — a mediation program launched to resolve challenges such as sound-related disputes between venues and residents — is not only redundant, it exhibits a stunning ignorance of the issues.

Residents can already go to their Community Boards for mediation, but before they do, they must gather supporting evidence. The entire burden of policing, documenting, and reporting on violations falls upon residents, which places an unreasonable burden on thousands of working families who may lose income if they take time off from work. There is also no enforcement arm to ensure nightlife venues adhere to any mediation agreements.

Worse still, there is no publicly available information detailing the number of mediations the Office of Nightlife has conducted, where they were conducted, who was in attendance, who mediated, or the outcomes of those mediations.

This creates serious questions about the efficacy, transparency, and accountability of how taxpayer dollars are being spent in service of the Office of Nightlife’s mission.

In the year since the listening sessions occurred, Palitz has failed to make publicly available any research or analysis from the events. As a result, stakeholders can only speculate as to why Palitz (and de Blasio) is prioritizing certain efforts against the many other issues raised during the listening events.

For example, members of Neighborhoods United — an organization formed by residents and community leaders from across the five boroughs of New York City to advocate for a balanced approach to nightlife — presented numerous concerns as well as potential solutions both at Palitz’s listening tour town halls and to the Nightlife Advisory Board directly.

We also provided solutions including:

The strict enforcement of the 500 Foot Rule, a law that is meant to limit the number of liquor licenses within a 500 foot radius.

Increasing the number of inspectors and the frequency of their visits (similar to the system in place for the restaurant industry).

A publicly-accessible database of all bars detailing the legally-binding stipulations associated with their licenses, as well as complaints lodged against them.

And while Palitz’s initiative in Hell’s Square and other efforts are welcome, they’re bandaids. They do nothing to address the underlying issues that persist across the city. Similar saturation zones are forming in neighborhoods such as Hell’s Kitchen, East Village, Innwood, and Williamsburg, and spreading into rapidly gentrifying sections of the Bronx and Queens.

And this lack of transparency does more than squelch accountability — it also impedes the development of innovative solutions.

On October 27, the City Council passed a new system for handling commercial trash, which is half the city’s waste. The legislation was the result of looking at the issue holistically, considers the entire trash ecosystem, was created by collecting and reviewing data, and factors in the needs of multiple stakeholders. The written report details how the plan will save the city money, decrease pollution, and improve the health, safety, and welfare of workers and residents.

By law the Office of Nightlife must release an annual report on its activities, the first of which was due 18 months after the law was enacted September 19, 2019 -- making the first report now nine months overdue --- but based on the biased and incomplete reporting in the Economic Impact Study, the redundant and undocumented current efforts, and ignorance at the issues facing New Yorkers living in high-density neighborhoods, residents are concerned that whenever it is released the Office of Nightlife’s report will be a bad faith document that misrepresents the urgent concerns of residents, vastly underrepresents the direct and ancillary costs associated with the nightlife industry, and recommends solutions that fail to address the underlying, systemic issues.

After the announcement of the Hell’s Square initiative we thanked Palitz for her efforts, and asked her to explain the process. She ignored our questions, saying only that she “hears us.”

What’s clear from her lack of transparency, lack of communication, lack of any visible strategy, and ignorance of the issues faced by residents, is that Palitz and de Blasio haven’t listened.

Residents demand the Office of Nightlife immediately make public all data and results from current initiatives and announce a date for a public presentation of Palitz’s comprehensive strategy and the data that supports it.