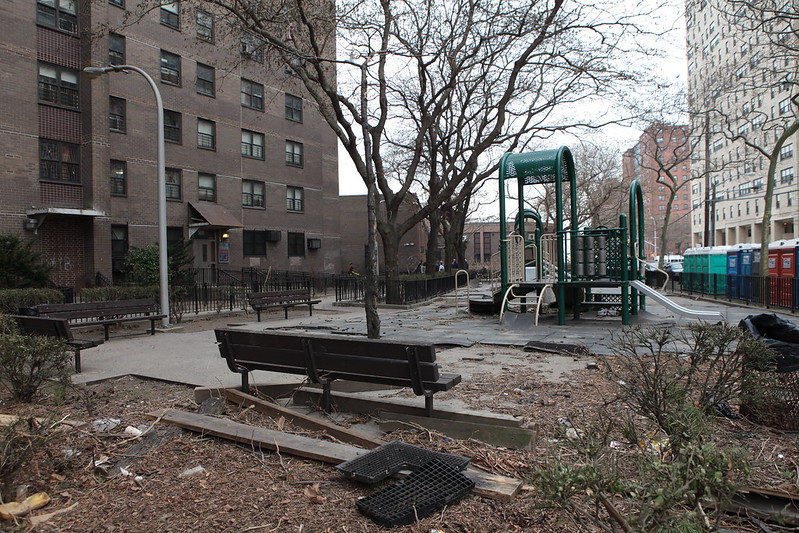 In his recent column, “Hidden in Plain Sight: Billions in Potential Revenue for NYCHA” (Dec. 2), one of the nation’s leading housing experts, Nicholas Dagen Bloom, writes in support of a study by the Regional Plan Association proposing to finance the repair and rehabilitation of NYCHA public housing properties by selling unbuilt-upon open space in those properties. Those air rights would be sold to real estate developers who would erect apartment buildings in surrounding neighborhoods.

This is bad for NYCHA residents, bad for the surrounding neighborhoods, and bad for the city as a whole. Moreover, there is a better, more effective source for the roughly $32 billion that NYCHA needs to restore its property to livable standards.

Bloom, with whom I usually agree, begins with the observation that NYCHA projects are dominated by unbuilt open space. It may be “unbuilt,” but it is open space used for playgrounds, athletics, benches, promenades, parking, and other facilities used by both NYCHA tenants and residents and workers of the surrounding neighborhood.

NYCHA’s 316 developments were not built to warehouse persons of low income. They provide an attractive living environment that met the standards of the period in which they were built and went through public approval processes like all government-sponsored redevelopment projects. In many cases the projects involved rezoning and provided public facilities for the entire neighborhood, not just NYCHA residents. The public facilities are provided by city agencies (schools, settlement houses, fire and police stations, libraries, medical services, playing fields, etc.) not just on NYCHA property, but also on contiguous city-owned sites, across the street, and further away.

It is true that many NYCHA properties are the product of long-discredited, mid-twentieth century notions of design and development. Surely, we can find ways to knit NYCHA property together with the surrounding communities without transferring bulk to nearby properties that would be built at heights and densities that exceed what current zoning would permit in the neighborhood. Moreover, that would be vigorously opposed by NYCHA’s neighbors and very likely fail to be approved.

In fact, in many cases such proposals would be illegal. In 1973, the Supreme Court of New York County, in the case of Fred F. French Investing Co. v. City of New York, ruled that New York City could not rezone Tudor City so the unbuilt open space of its private parks could be transferred to receiving sites that would suffer from added noise, traffic, density, and other problems while being too far away to benefit from the light, air, and recreational opportunities of the now permanent parks space.

Zoning is a planning technique for maintaining a balance between the occupants of an area (people, businesses, and institutions) and the infrastructure (water supply sewers, transportation, etc.) and community facilities (schools, parks, medical services, libraries, etc.) needed to support them, without burdening the area with too much noise, traffic, and pollution. It should not be misused by becoming a device to monetize the value of “unbuilt” open space to pay for housing repair.

When homeowners need to make repairs, they do it the old-fashioned way: they borrow the money, often with a second mortgage. There is no debt on NYCHA properties. There are two obstacles that are preventing NYCHA from borrowing the money. First, neither the tenants nor NYCHA have money to pay additional debt service. Second, the federal government does not permit Housing Authority property to be mortgaged. But, there is a solution to both problems.

The City of New York could issue tax-exempt bonds, whose revenue could cover the repair of every NYCHA property. Today the low cost of public borrowing means that annual debt service would be $1-2 billion annually. Surely that amount could be paid from the city’s growing annual budget ($94 billion for 2020).

The federal government has a program that would allow NYCHA to transfer its property to a public-private partnership that would be responsible for development and management, while retaining low-income residents who would be transferred to a long-term Section 8 contract, so they would not have to pay additional rent. It is called the Rental Assistance Demonstration project (RAD).

That is exactly what NYCHA has done in Far Rockaway, Queens, where it has rehabilitated Ocean Bay Apartments, a 24-building public housing project with 1,396 apartments. It is a joint effort of New York State Homes and Community Renewal (HCR), U.S. Department of Housing and Urban Development, and RDC Development (a joint venture between MDG Design + Construction and Wavecrest Management).

NYCHA, working with other city and state agencies, should begin immediately to transfer all its properties to RAD and the City Council should agree to cover through the city budget the needed annual debt service. Surely, the decent thing to do is to spend 1 percent of the city’s budget on repairs that would provide NYCHA residents with decent, safe, and sanitary housing within a suitable living environment – something that was promised in 1934 by Mayor La Guardia when NYCHA was established, three years before the Housing Act of 1937 began providing subsidies for public housing.

***
Alexander Garvin has worked in urban planning, government, and real estate for five decades. He is currently President and CEO of AGA Public Realm Strategists, Inc., a planning and design firm in New York City, and previously was managing director for planning at NYC2012, the committee established to bring the Summer Olympics to New York in 2012. In 2002-2003, he was responsible for planning the rebuilding of the World Trade Center for the Lower Manhattan Development Corporation. Garvin is the author of several books including The American City: What Works and What Doesn’t.