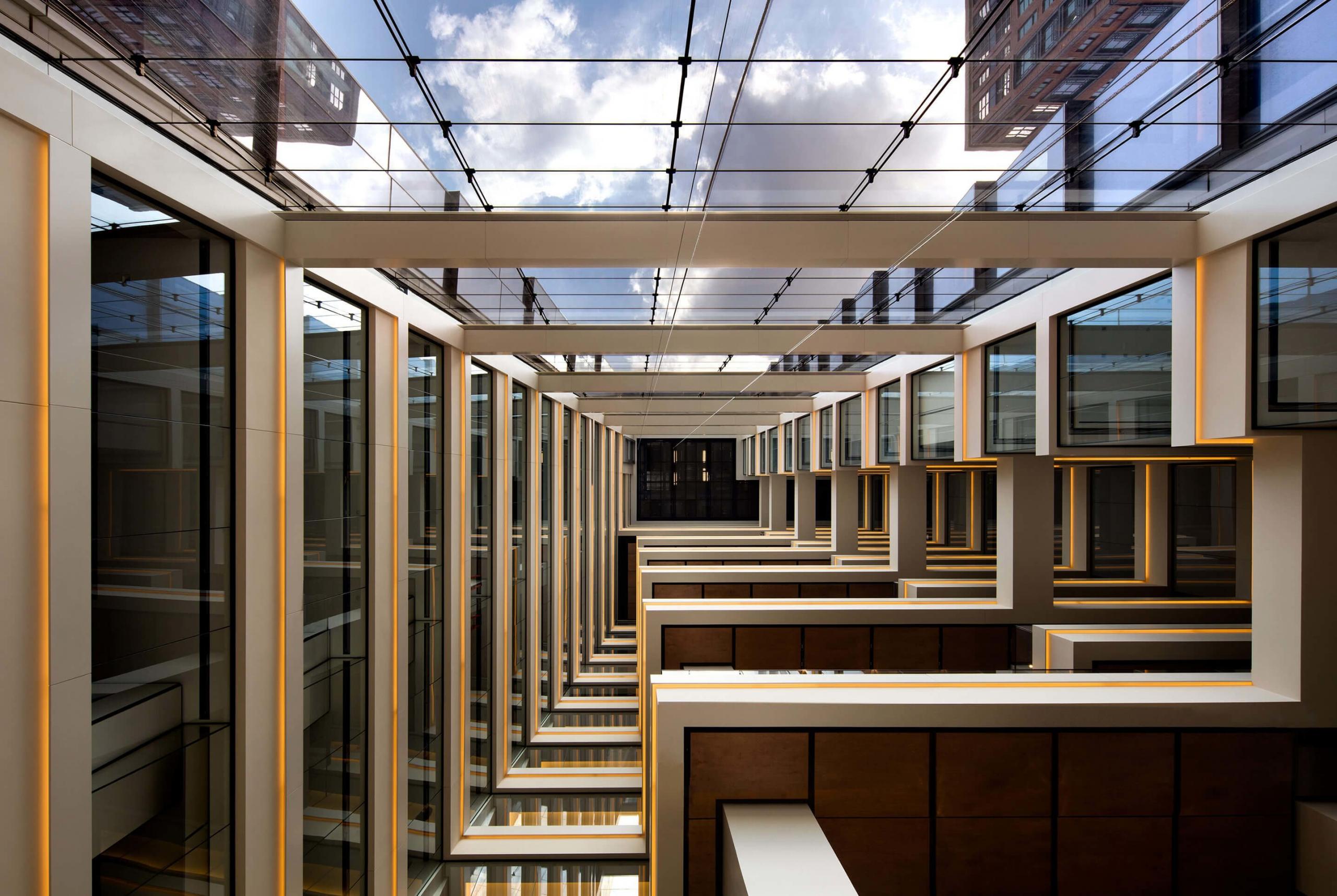 Today Hudson Yards is largely described as a billionaires’ fantasy, but in fact it’s a rare instance of the city, state and federal governments partnering to create a strategy to help ensure New York City’s position as the world’s commercial capital. And it has an interesting origin story few may be aware of.

Three months to the day before planes were flown into the World Trade Center, a little-known, but important report was issued by a group convened by New York Senator Chuck Schumer and dubbed the “Group of 35.” Largely a wonky urban policy piece, the report called for the public sector to take a much more proactive role in supporting future commercial development in the city.

In spite of the robust economy that the city enjoyed in the late 1990s, the report painted a dire picture of the future of commercial development in New York. The cyclical nature of the commercial real estate market was highlighted as a series of booms and busts that challenged any strategic and comprehensive approach to new development. According to the report, if the city didn’t take action to help increase the supply of new space, “New York City will miss out on hundreds of thousands of new jobs and increased economic activity in the next 20 years.”

Ironically, in New York City the crash of the early 1990s was good for new and growing companies to find plentiful and cheap space for expansion, but by the late ‘90s there was a growing concern that there wasn’t enough space to support future employment.

Looking forward, the report anticipated that New York City would add nearly 600,000 jobs over the next 20 years, half of which would be office-based. The city would need 23 million square feet of new office space over the next 20 years and an additional 60 million square feet thereafter through 2050. Looking at the development trends of the previous decade, construction had all but stalled for new office space. The city’s development market was paralyzed.

The report concluded dramatically that the city “office market was in a space crisis by the end of 2000.” New York lagged other cities through the 1990s, and over half of new office space built in the region occurred outside the city.

Hudson County, New Jersey was seen as particularly competitive; the report noted that from 1997 to 2000, more than a dozen companies moved from New York to New Jersey to occupy 6 million square feet of space in Hudson County alone, with 30,000 jobs lost in those moves.

In terms of the financial constraints, in spite of a strong real estate market, rents were still not high enough to support new development and lenders’ requirements for financing were too restrictive except for the largest and most credit-worthy tenants.

So given the historical boom and bust cycle of real estate development, coupled with the physical and financial constraints, the Group of 35 put forth a Commercial Development Strategy for New York City, primarily focused on creating new commercial business districts (CBDs) for the city to keep pace with the competition that it was facing both regionally and nationally. 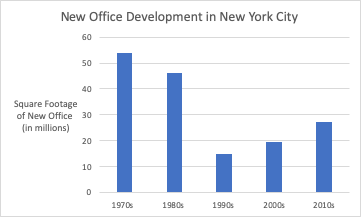 While there were a number of recommendations for relief from the high real estate taxes paid by developers and their tenants, the Group of 35’s “most ambitious component” was the creation of new and expanded CBDs. New CBDs were called for in both Downtown Brooklyn and Long Island City, but the most radical idea was the creation of the new CBD in Manhattan.

For much of its history, Manhattan business was centered in Lower Manhattan. It wasn’t until the early 20th century, with the creation of the first subway in 1904, that development, and particularly office-related uses moved to Midtown. By the mid-20th century, Midtown had largely overtaken Lower Manhattan as the premiere office district in the city. And in spite of numerous attempts to revitalize Lower Manhattan, Midtown still commanded significantly higher rents. As a result of the strength of this market, Midtown was essentially “full.” There were no available sites for significant new development in Midtown -- the Far West Side beckoned.

With the increasing office activity on Manhattan’s West Side, thanks to the redevelopment of Times Square, the Far West Side appeared as a “natural” extension to midtown. It had adjacency to regional connections at Penn Station, the Port Authority Bus Terminal, Hudson River ferries, the West Side Highway, and the Lincoln Tunnel. In spite of these connections, the neighborhood was highly underutilized with surface transportation uses, vacant lots, and a low population density. There was also space to accommodate large-scale development above the MTA’s West Side Rail Yards.

Interestingly, there was not one mention in the report of the High Line, which would eventually become one of the most significant components of the development of Hudson Yards and west Chelsea in the 2000s.

But there were significant obstacles to developing the Far West Side, including the lack of subway access and low-density zoning. An innovative strategy was put forth to extend the 7 subway line through the use of tax increment financing to help pay for the extension.

In 2005, thanks to a massive rezoning led by the city that laid the groundwork for over 40 million square feet of new development, Hudson Yards was born. To create the necessary commercial anchor for the neighbrohood, the MTA and the City teamed up in 2007 to issue RFP’s for massive development over the MTA’s west side rail yards. The MTA also built a grand new 7 subway station that opened in 2012 with city funding in an all too rare example of intergovernmental cooperation and mutual support.

Hudson Yards has transformed a large swathe of Manhattan with a bustling new office district. According to JLL, nearly 8 million square feet of new office space has been built and occupied to date, and another 8 million more square feet of space is under construction and largely pre-sold or pre-leased. Hudson Yards is already providing nearly twice the amount of space built in the entire city in the 1990s.

Today, the city is enjoying office employment at a historic high of 1.97 million jobs versus a low of 1.65 million in January 2010. While we cannot only give credit to the Group of 35 for their vision in anticipating the need for all this space, we should appreciate and learn from their foresight in giving New York City a strategy to be proactive in the creation of new business districts to help feed the engine of economic growth in this city.

It almost seems laughable today to even consider competition from Hudson County, New Jersey, but at the turn of the last century there was a real threat to New York City’s dominance as a commercial capital from regional office markets. Before we take for granted the glittering skyscrapers, new subway, and expansive parks that now dot the skyline and streetscape of the West Side of Manhattan, we should remember the thoughtful, balanced, and proactive planning that went into making happen. 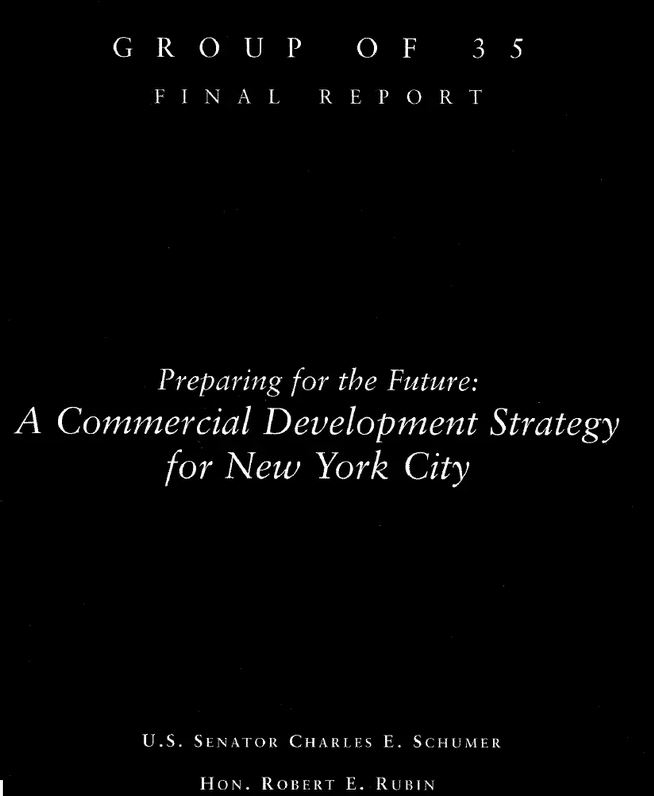 ***
Michael M. Samuelian, FAIA, AICP, is the founder of Samuelian Consulting LLC and an adjunct professor at Cooper Union. He was previously President and CEO of the Trust for Governors Island and, prior to that, a Vice President of Planning and Design with Related Companies. He will be teaching a seminar on the development of Hudson Yards at the Yale School of Architecture this semester.