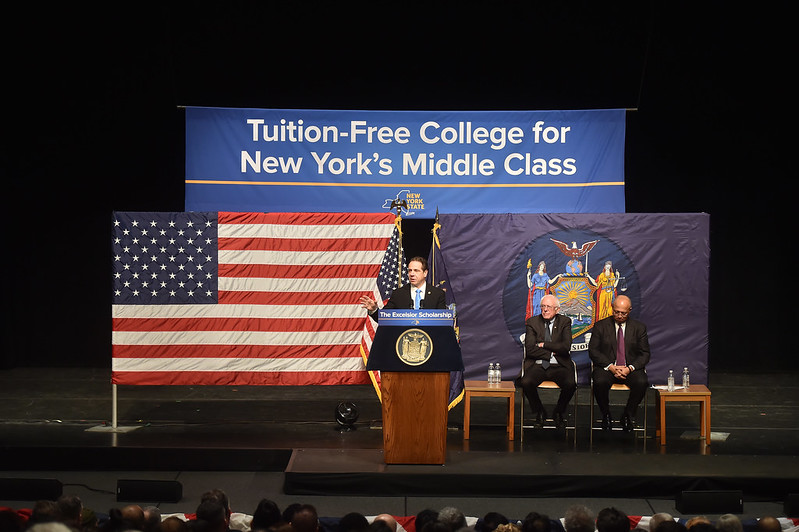 In January 2017, Governor Andrew Cuomo unveiled the Excelsior Scholarship, New York State’s “free college” initiative. About 20,000 students were awarded Excelsior in the inaugural 2017-18 year. In 2018-19, the number of scholarship recipients rose to 24,000, and for 2019-20, the Legislature projects an increase to 30,000, which will equal no more than 5% of the state’s public college enrollment.

The 5% figure is small compared to the massive hype that surrounded the program’s rollout. Yet 30,000 beneficiaries is still a large number, exceeding the total undergraduate enrollment at the State University of New York (SUNY) campuses at Albany and Stony Brook, or the combined enrollments at the City University of New York (CUNY) Brooklyn College and City College campuses.

When Cuomo first introduced Excelsior, it was with two purposes—first, to provide relief to families in the middle-class college affordability squeeze, neither eligible for much existing financial aid nor easily able to pay rising public tuition, and, second, to advance educational opportunity and equity to all New Yorkers. “With this program, every child will have the opportunity that education provides,” he proclaimed.

As a result of Excelsior, the amount of state financial aid distributed to middle-income families has markedly increased. At the same time, aid to the lowest-income students via the state’s Tuition Assistance Program (TAP) and TAP credit program has grown only incrementally with step-ups to keep pace with tuition increases.

With Excelsior, the goal of middle-class college affordability has advanced, yet as it has a wider chasm has opened between the resources available to low-income and middle-income students. Excelsior has never offered that much to low-income students and opening up Excelsior to higher-earning families won’t change that.

Now that the governor is proposing to expand Excelsior, below are six important things to know about the program, including that as it is now constituted, it offers relatively little to low-income students, community college students, and CUNY students.

1. Excelsior does not help low-income students.

The lowest income students in New York State receive enough financial aid from federal Pell grants and the TAP program to cover the full costs of CUNY tuition or SUNY tuition. As “last dollar” awards, Excelsior scholarships only go to students who have tuition balances remaining after exhausting all other aid.

This is a shame, as much research, often coming from the Hope Center for College, Community, and Justice, documents that low-income college students’ financial challenges compromise their abilities to stay in college and to progress toward graduation.

2. Excelsior benefits students from families that are “upper” low-income and middle-income.

Students from families with taxable incomes of between $80,000 and $125,000 are in the sweetest spot. At $80,000+ in taxable income, families generally phase out of eligibility for Pell or TAP. For these students, Excelsior flips the script from a full tuition bill to none.

As the income cap has increased to $125,000 from the initial cap of $100,000 in 2017-18, the program has become even more of a middle-class tuition relief program than it was during its inaugural year.

The proposal to increase the upper income limit to $150,000 would extend the program towards upper middle-class territory. According to the Pew Research Center, a household of three with an income of $50,697-$152,092 is middle-class, with that defined as having an income of between two-thirds and double the national median income adjusted for household size, with the figures modified to $60,49-$181,496 for household sizes of four.

In the scattergram, the lower the Pell grant receipt rate (and by proxy, the more middle-class the student body), the higher the percentage of students who received Excelsior. (The methodology section at the end of the article describes the data sources and their limitations.)

The lower quadrants of the scattergram are an area worthy of special attention. In 2017, 12 of the state’s public colleges had less than 40% of their freshmen receiving Pell grants. These colleges had the most middle-class student bodies among the state’s public colleges and included schools such as SUNY Geneseo and SUNY Binghamton. At these 12 campuses, 6.3% of students received Excelsior in 2017-18, nearly double the 3.2% statewide rate for the same year—and this was as a number of these campuses enrolled significant numbers of out-of-state students not eligible for Excelsior.

Meanwhile, as an example from a campus with a high-percentage of low-income students, at CUNY LaGuardia Community College, whose data point is in the upper left corner of the scattergram and where 73% of freshmen received Pell grants in fall 2017, only 0.3% of the student body received Excelsior, far below the 3.2% statewide rate.

Excelsior recipients are especially scarce at the community colleges, where 1.7% of students were awarded Excelsior in 2017-18, compared to 4.6% of students at the four-year colleges.

In dollar amounts, $12.2 million in Excelsior funds, representing 18.3% of the total Excelsior budget, went to community college students in 2017-18, with the balance of $54.2 million, or 81.6%, going to four-year college students.

Excelsior also does not register much of a presence at the CUNY colleges. In 2017-18, the 18 CUNY colleges enrolled a 16.3% share of Excelsior scholarship recipients, with the balance of 83.7% of recipients attending SUNY colleges, even though CUNY students comprise 38.8% of the state’s public student enrollment. The number of recipients is small at SUNY but minuscule at CUNY. 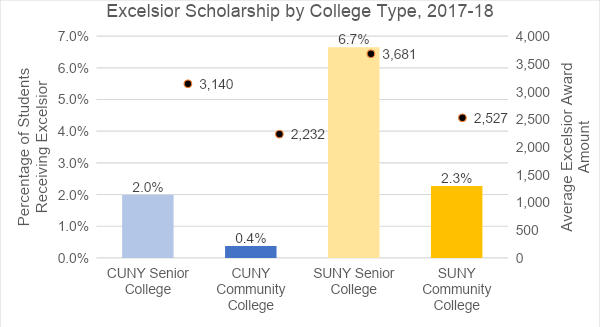 In dollar amounts, $9.9 million in Excelsior aid went to CUNY students compared to $56.4 million to SUNY students. The discrepancy between the amounts to CUNY and SUNY students is steep.

In theory, “free college” seems like a neutral idea—free to all!—yet in reality, Excelsior’s rewards are targeted. The by-product of Excelsior’s income and academic eligibility criteria is a funding imbalance between CUNY and SUNY constituencies.

Today, the imbalanced distribution of Excelsior awards is almost certainly more biased in favor of SUNY four-year schools than it was in 2017-18. The SUNY four-years likely have the highest percentage of students enrolled from families with incomes of between $100,000 and $125,000, an income range presently covered by Excelsior that was not during the program’s inaugural year. If Governor Cuomo is successful in expanding the income range another $25,000 to $150,000, then the imbalance in the distribution of funds between CUNY and SUNY would likely deepen further.

Data from the completed 2018-19 academic year, when the income cap was raised by $10,000 to $110,000, could shed light on the impact of marginally increasing the income cap but so far HESC has yet to release that information to the public.

5. The Excelsior program is not incentivizing more students to enroll in college.

One redeeming value for Excelsior could be that its simple message of “free college,” broadcast widely by Governor Cuomo and in the news media, may be incentivizing more New Yorkers, especially of limited means, to enroll in college and to achieve college degrees.

Research from Hieu Nguyen, a researcher in the Department of Economics at the University of Tennessee, suggests that, at least in its first year, Excelsior did not catalyze an enrollment boom. According to Nguyen’s 2019 article in Education Economics, which compares enrollment patterns in New York State with enrollment patterns in other states using a quasi-experimental statistical design, Excelsior had a “negligible effect” on boosting higher education enrollment in the state.

It should not come as a surprise that Excelsior didn’t jumpstart college enrollment given that it has such restrictive eligibility criteria and offers no financial benefits to most low-income students.

The research, however, is not definitive, as Nguyen’s research explored just Excelsior’s first year. There may have been an Excelsior-related bump in college enrollment in the program’s second or third years, once there were longer periods of time for the message of “free college” to influence high school students’ developing attitudes towards college-going.

6. Excelsior may have positive effects on student retention and on-time graduation.

Another positive feature for Excelsior could be that it contributes to increased retention and graduation rates.

In his State of the State address, Governor Cuomo declared, “The national progressive dream of free college tuition is a New York reality.” Yet for New York State’s “free college” program to be a strong model to other states and cities, there must be reforms to the entire New York State financial aid system such that it distributes more aid to low-income students, rather than introducing a costly subsidy to families in the $125,000-$150,000 income range.

*****
Methodological Notes:
The HESC data on the Excelsior Scholarship awards from 2017-18 is posted on the Open NY website. The figures for SUNY Tompkins County Community College (TCCC) are “pending final eligibility determination,” according to HESC (email correspondence), and have been excluded.

This is an imperfect approach, as the Excelsior scholarship headcount figures in the HESC dataset are described as being for both semesters of the 2017-2018 award year rather than just for the fall semester. An alternative method would be to rely on the IPEDS unduplicated annual headcount as the denominator for calculating the award rate percentages. This alternative approach would have generated lower award rates and an even more pronounced gap in award rates between community college and four-year college students.

As a consequence, the percentages of students receiving Excelsior cited in this article are not precise but are approximate ones employed to show relative differences.

***
Are you a student, parent, school official or other person who has an experience with the Excelsior Scholarship that you’d like to share? If so, contact This email address is being protected from spambots. You need JavaScript enabled to view it..

***
Eric Neutuch is a freelance journalist and former CUNY administrator, 2009-2017.