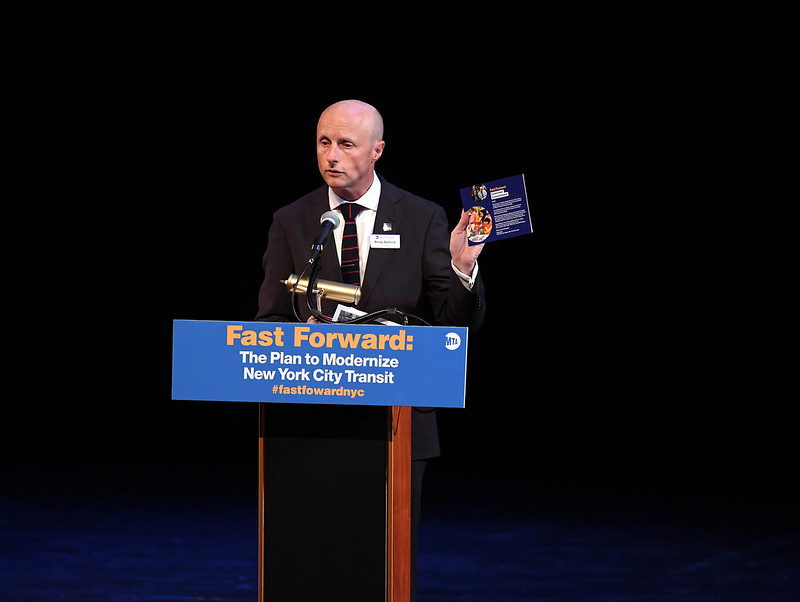 There will never be another MTA New York City Transit President with the power Andy Byford had when he took the job two years ago. Under Governor Cuomo’s MTA reorganization plan, all future NYCT “Presidents” have been stripped of the power to manage capital projects like replacing signals and switches or buying new rail cars and buses. The next boss of Transit also lost control of a large number of engineering experts and legions of Transit Authority workers who are reimbursed for their time on capital projects.

Going forward, Transit’s capital planning, purchasing, and project management will be done by a centralized, newly-renamed MTA Capital Construction & Development agency. This massive agency is run by MTA Chief Development Officer Janno Lieber,  who has immense powers and approves everything from which kind of new bus to buy to who gets to rent the candy stand in the 103rd Street subway stop.

Byford’s departure got so much attention in part because the MTA is going through a wrenching reorganization ordered by the governor that includes eliminating 800 operations workers and 1,900 administrative staff. Amidst this turmoil, Byford was highly respected by rank-and-file workers and riders for hugely reducing subway delays with a mix of hard-headed pragmatism, sincerity, and optimism.

MTA “Reorganization” Pushed Out Byford
It was Governor Cuomo’s reorganization plan, approved in July 2019, just three months after it was mandated by the state budget, that led inevitably to Byford’s resignation.

In his resignation letter, Byford wrote that the “transformation plan...called for the centralization of projects and an expanded HQ, leaving Agency presidents to focus solely on the day-to-day running of service. I have built an excellent team...who could perform this important, but reduced, service delivery role.”

The central tensions in Byford’s relationship was the governor’s inability to share credit with a talented subordinate, penchant for secrecy, and his preference for surprise “man on horseback riding to the rescue” announcements instead of conventional, fact- and expert-based planning.

Byford’s “I’m a global transit expert” worldview came into a head-on collision with the governor’s insistence that the MTA and Byford could use Ultra Wide Band (UWB) radio technology to vastly speed up resignaling the subway system. New signals are a top priority and the core of Byford’s Fast Forward plan, because signal problems are the main cause of subway delays.

The problem is that UWB has not been widely deployed by any leading subway system and is viewed as a promising, but not mature, technology. Signal modernization is also at the fault line of authority over who will fix the subways: NYC Transit or MTA Capital Construction & Development. Since the departure of Byford and then his top signals deputy, Pete Tomlin, control over signal modernization -- and the decision about which lines get new signals first -- appears to be in MTA Capital Construction & Development’s hands.

Byford and Cuomo also famously clashed over the L train tunnel and subway speeds initiatives, when the public saw the governor reaching over the MTA board and MTA CEO to make direct decisions about MTA project management.

Reorganization or Disorganization?
Reinvent Albany and transit advocates have repeatedly warned that the reorganization plan could result in the fragmentation of expertise, and the derailment of Byford’s Fast Forward Plan (both before the passage of the state budget that mandated the change and after, when the MTA’s consultant, AlixPartners, was developing the recommendations).

We were concerned that shifting NYC Transit’s talent, like Byford’s signals expert Tomlin, to MTA Capital Construction would result in fragmentation, where the engineering and capital planning staff were separated from operations, creating new silos. One could argue the transformation plan created more than 13 new silos, with many new chief officers -- of operations, engineering, technology, communications, etc. -- all reporting to the CEO/Chair. See the “chief” heavy org chart below. 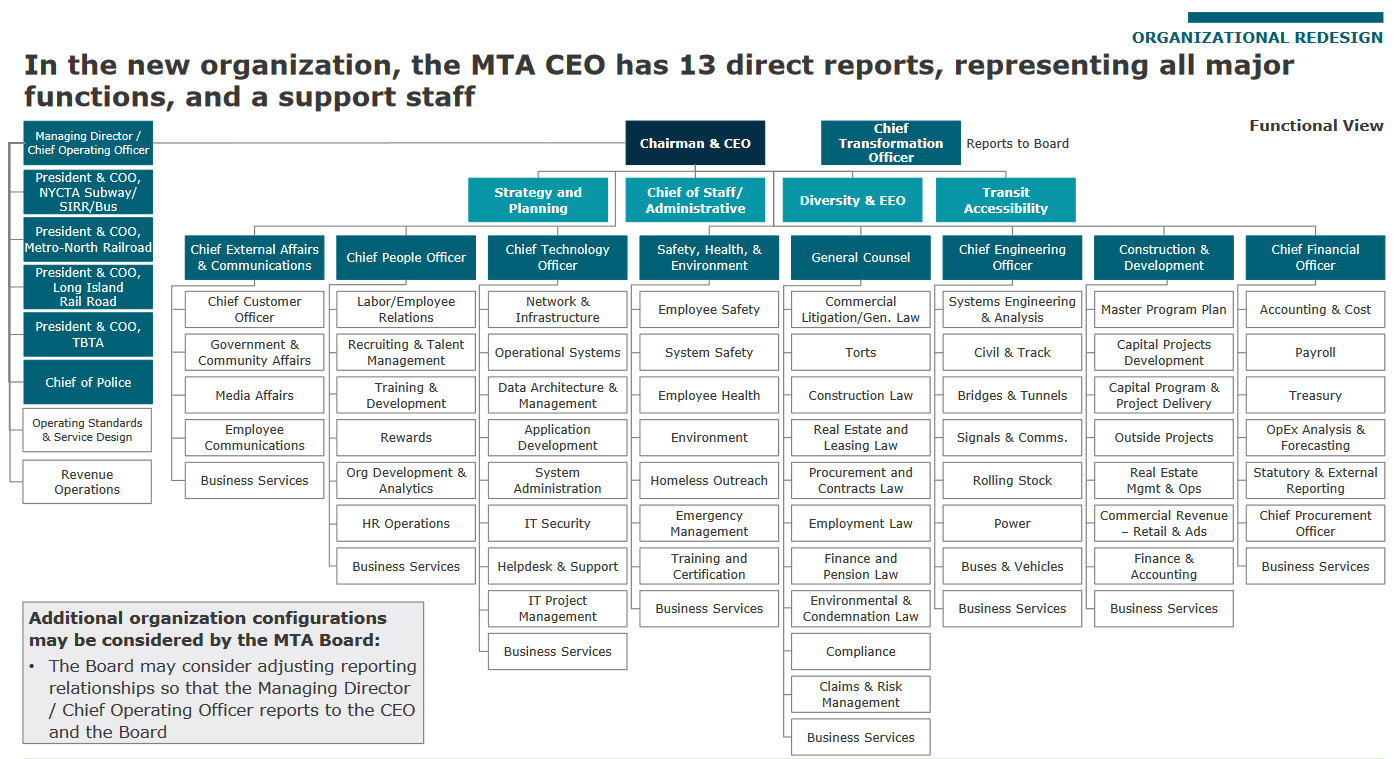 Splitting NYCT into Subway and Bus Operations?
A June 2019 “draft” version of the transformation plan that was scrubbed before final release proposed separating subways from buses, with all MTA buses merged together under one head. That seems more likely now with Byford’s departure, though not without challenges given the separate collective bargaining agreements for bus operators, as express buses are under the MTA Bus Company, while NYC Transit runs local and select buses.

Buses are too often relegated to second-tier status below subways in terms of public officials’ focus, but not under Byford. Byford made a point to own buses equally with subways, as seen through his work on the 14th Street busway and borough-based bus redesigns, which have been long overdue.

Transit advocates at the Bus Turnaround Coalition are working hard to maintain the momentum that Byford helped start, but his departure and the overall reorganization at the MTA leave it unclear who will restore the bus system. Thanks to Bus Rapid Transit, buses have undergone a global renaissance over the last 25 years that has skipped over New York City. With Byford leaving, all eyes will be on Governor Cuomo to ensure that needed improvements are made to both subways and buses.

#CuomosMTA
We hope our concerns are misplaced, and that the governor’s massive reorganization of the MTA will result in big benefits for riders and those who work for the Authority. We hope the governor’s repeated, direct interference in the MTA’s operations will lead to greater organizational focus and effectiveness. We hope that the reported exodus of experienced MTA managers -- some of whom left before Byford -- will allow for new talent and new ideas to rise. We hope the governor lets Janno Lieber do his job, and that Lieber knows what to do with the massive power he’s accumulated with the new MTA Capital Construction & Development agency.

Yes, we hope for a lot of things, so while we’re at it, let’s hope that the governor will take responsibility for the failures, not just the successes of his efforts at the MTA.