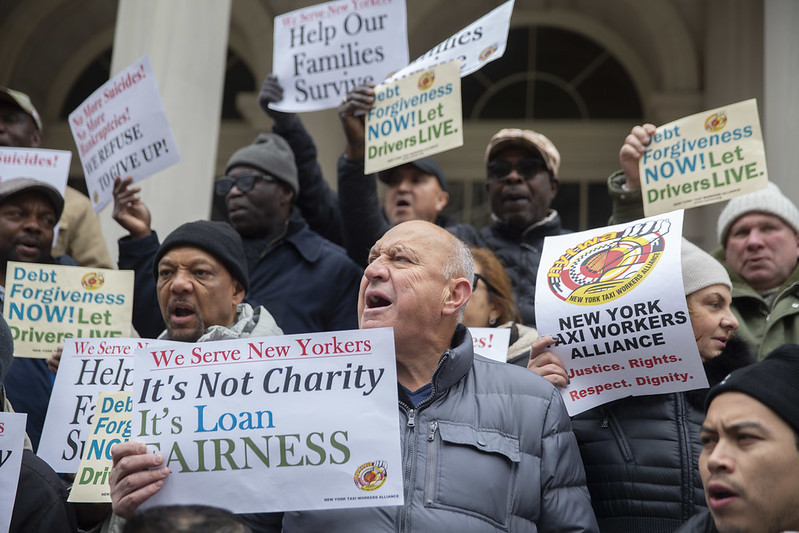 Last May I wrote a column criticizing the practice of including taxi medallion sales revenue in the city’s operating budget and pointed out the perverse incentive it creates to encourage high sales prices. My comments were triggered by the publication of a compelling investigative series on the New York City taxi medallion market in the New York Times.

The series provoked outrage from elected officials, several of whom launched investigations and studies of their own. The City Council appointed a task force, which recently came up with thoughtful recommendations; but the state’s attorney general has thrown a wrench into efforts to responsibly help needy taxi medallion owners by threatening to sue the city to give all their money back to everyone who bought medallions during the ten-year period when prices rose and then fell so dramatically.

It is heartbreaking to hear the stories of taxi drivers, many of them immigrants, who thought that ownership of a taxi medallion was a ticket to the American dream, only to see their value plummet as an onslaught of ride-hailing vehicles flooded city streets. But the challenge is how to help these driver-owners in a way that is appropriate and fiscally responsible.

In the early 2000s when the city’s economy was doing well and the ceiling on the number of medallions made them a scarce resource, it made sense that they were extremely valuable. Yes, the New York City Taxi and Limousine Commission (and city’s budget office, which counted on medallion sales revenue to help balance the budget) encouraged -- or at best, did not try to mitigate – the rapid growth in medallion prices from 2004-2014, but market conditions were the primary cause.

In retrospect it looks crazy that prices rose as high as they did, but no one wanted to cast a skeptical eye (except Citizens Budget Commission and other fiscal monitors, of course) on a business that could empower hard-working people to prosper. No one anticipated the rapid and dramatic creation and growth of Uber, Lyft, and other ride-hailing services that have overwhelmed city streets with cars and left taxi drivers scrambling for passengers and income.

After the Times series the City Council created a Taxi Medallion Task Force that issued its report last month, recommending that the city form an entity to purchase outstanding medallion loans at discounted prices and work with borrowers to pay them back over time. The report recognizes that it is not feasible for the city itself to fully buy the loans, although it states that costly city-sponsored loan insurance might be necessary to make the fund viable. What is proposed is a kind of public-private partnership in which “mission-driven” entities such as socially responsible investors and philanthropies contribute to a pool of funds. While Mayor de Blasio has not endorsed this specific recommendation he has said this is the best solution he has heard to the problem so far.

However, before there has been any time for this approach to be refined and pursued, along comes New York Attorney General Letitia James with a plan that would be more straightforward and far more costly to execute: sue the city and make it pay back all the $800 million-plus  it has collected for medallion sales since 2004. A notice has been filed with the City Comptroller giving the city 30 days to resolve the claim before a lawsuit is filed.

The threat of this litigation casts a pall over other attempts to help underwater taxi medallion owners by getting their lenders to accept discounted amounts. Why would anyone agree to take less money when there is now the prospect that the city will pay the full amount borrowed? Why would financial institutions and other lenders participate in the City Council’s plan to create a fund for this purpose if the need is obviated by the AG’s lawsuit?

While AG James is undoubtedly trying to help struggling individual driver-owners, it is primarily professional industry lenders and fleet owners who would benefit from her claim. And it would unfairly hold New York City government responsible for a problem that has multiple layers and causes.

Most important, the AG’s litigation would set an extremely dangerous and expensive precedent that taxpayer dollars can and should be used to bail out an entire line of business that has hit hard times. (It is unclear how the lawsuit would impact negotiations to reduce the amount due on several thousand medallion loans just purchased from the National Credit Union Administration by a hedge fund, Marblegate Capital.)

Can the city be expected to pay off the loans of restaurateurs who must close because of new minimum wage and other regulatory requirements? What about the mortgages of homeowners who may face more difficulty paying them off if and when property tax reforms are adopted? By the way, when the Attorney General was a City Council member she voted to approve the budgets that included the revenue from medallion sales; does that make her culpable too?

The city has no choice but to resist the AG’s attempt to be the taxi industry hero at everyone else’s expense and the City Council should join the mayor in denouncing the lawsuit.

Meanwhile, even if the city successfully facilitates a loan fund, still left unresolved is how to keep medallions financially viable over the long-term. What is needed is a coherent plan of reforms and new policies to make the system of taxis and for-hire vehicles in New York City functional going forward.