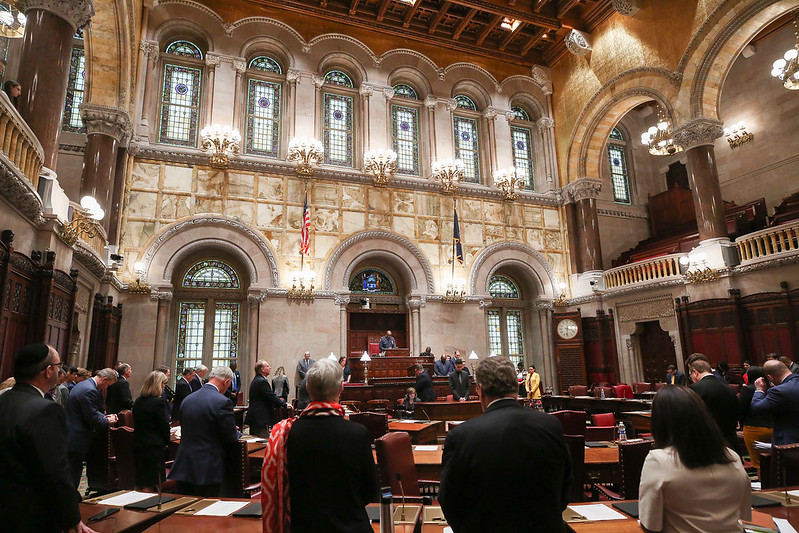 In New York State, money doesn’t only talk, it decides who does the talking, who makes the laws, whose voices matter, and who gets left out. After years of grassroots activism, New York State is a big step closer to shifting the balance of power in Albany through a new public campaign financing program, moving away from big-monied interests and toward regular New Yorkers.

A new state campaign finance system with lower contribution limits and public matching of small donations became law in December, designed by a commission appointed by Governor Cuomo and legislative leaders after years of Democratic officials like the governor talking about support for reform. But Cuomo has omitted necessary implementation funds from his proposed budget for next fiscal year, which begins April 1. Without sufficient resources to scale up, the new system of public campaign financing can’t have the impact we need for change.

The ideal reform would amplify the voices of black and other historically marginalized people by using public matching funds in electoral campaigns throughout the state. Yet Governor Cuomo’s failure to fund implementation, coupled with his support of new ballot access restrictions the commission created to hinder smaller political parties, casts serious doubt on his claims of wanting a better democracy.

When Senate Majority Leader Andrea Stewart-Cousins and Assembly Speaker Carl Heastie release their majorities’ own one-house budget proposals this month, they must include start-up funds for public financing and then urge the governor to agree to such funding in their final adopted budget. The three leaders must assure the millions of New Yorkers who have been shut out for too long that this transformative reform is here to stay.

Regular New Yorkers would have greater influence to counter powerful special interests with small donor public financing, which matches low private donations with public funds for candidates who choose to participate. In New York City, legislative candidates who opted into the city’s matching funds program relied more on the residents of their districts for support than candidates who did not use public financing.

The new state program would increase the campaign finance influence of constituents even more than in the city’s program. For legislative candidates, only small donations from within the district they are running to represent would be matched. That may seem like a limited pool of potential funds for a candidate, but the level of match is sizeable enough to enable someone to raise competitive sums. Even the smallest donation from a constituent will be important, as a sliding scale gives the highest match of public funds for the lowest dollars.

And private fundraising requirements to participate in the program are lower for candidates running in low-income districts, making the possibility of electing candidates of constituents’ choice even greater. Experts say these features are innovative and could be models for other parts of the country looking for alternatives to the undue influence of big donors in their elections.

We will keep fighting to improve the new program. With the proper funding and support it will be profoundly better than the old way, which perpetuated racial injustice and outsized political power for the wealthy by letting millions of dollars drown out millions of people.

There’s no time to lose to start building the program, which is set to launch in November 2022 for candidates running in the 2024 legislative and 2026 statewide elections. The State Board of Elections has requested the modest outlay of $2.7 million for this year to hire staff and build the technology needed to provide a solid foundation for the program.

The governor and legislative leaders must commit to deliver the public financing program that they promised just a few months ago. If we ever want to have real democracy in New York, political voice and representation must finally become open and equally accessible to black and brown communities in our state.

***
Monifa Bandele is Senior Vice President for MomsRising.org and a member of the Leadership Team of the Movement for Black Lives Policy Table. On Twitter @monifabandele.