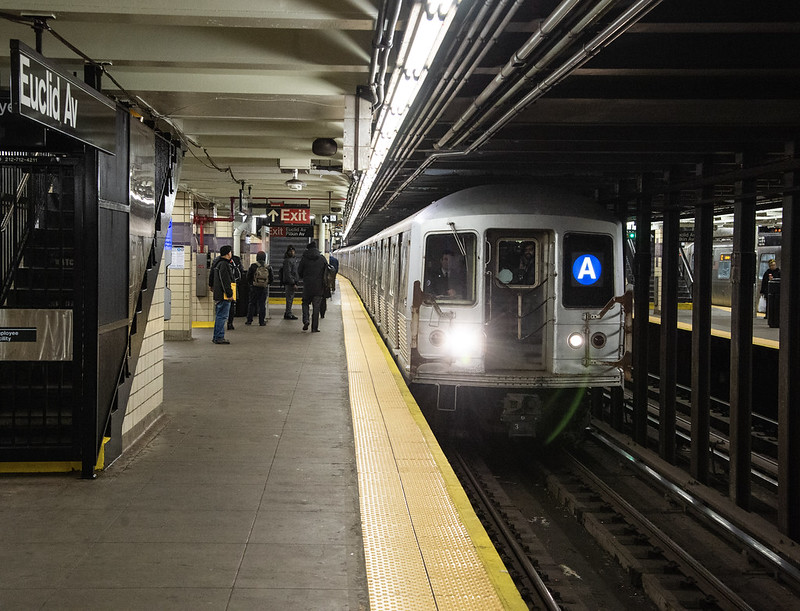 Subway ridership has plunged during the coronavirus outbreak (photo: Marc A. Hermann/MTA NYCT)

Patrick Foye, the chair of the Metropolitan Transportation Authority and therefore the leader of the city’s subway and bus systems, sent a letter to the local Congressional delegation on March 17 stating that the MTA faced financial calamity and seeking $4 billion in federal aid.

The MTA’s cash reserves are small, meaning it will go broke very quickly because of massive revenue losses (in this case resulting from the impact of the coronavirus outbreak). By going broke I mean unable to meet payroll and pay bills. More than 60% of the MTA’s expenses are for labor, nearly all of it under contract, and those workers need to keep getting paid.

In Foye’s letter to Congress, he reported the authority has drops of 60% in subway ridership, 49% in bus ridership, 90% in Metro-North ridership, and 67% ridership on the Long Island Railroad.

On March 19, MTA New York City Transit President Sarah Feinberg reported on WPIX-11 that subway ridership had dropped 71% from the same date a year prior. For the city subway and bus systems, that means MTA NYC Transit is still carrying 3 million daily rides, instead of the normal 7 million rides per weekday. Three million rides is still a lot of people and the system has to keep operating to bring health care workers, first responders, and others essential for society’s basic services, including in the utility industry, supermarkets and grocery stores, banking, some retail, and essential government functions.

Foye’s letter also cited a potential collapse of the $6 billion in taxes and fees directly dedicated to the authority that derive from economic activity in the metropolitan area. The prospect of rapid revenue losses puts the MTA in an impossible situation — it must keep paying its employees to operate the trains and buses, but its cash flow may be insufficient to meet payroll in the near future. Payroll, pension, and health and welfare also don’t include paying the fuel and electric bills, buying supplies, or the $250 million a month needed to pay interest on the borrowed funds that sustain the capital program and assets already put in place.

The MTA has only about $560 million in general reserves, about three-quarters of which is set-asides for retiree health and welfare, which the MTA is obligated to pay but, unlike the pension system, are unfunded. The MTA makes these payments for the retirees in cash out of the operating budget but they rise every year, though it has tried to accumulate some reserves for this purpose.

An analysis of the overall MTA budget shows, however, that the combined ridership and tax revenue financial losses by the end of April would bring a shortfall for the MTA of around $500 million from the $1.4 billion sum needed to pay one month’s MTA expenses. The monthly ridership revenue is about $500 million, and it is nearly six weeks to the end of April. A 50% drop would mean a loss of at least $375 million over that period. Foye’s reports indicate the ridership losses exceed 50%.

The dedicated taxes and fees also run about $500 million a month, and even a 20% drop over the next six weeks would result in a loss of $150 million. With a revenue shortfall by the end of April of $500 million, the authority would need all of its reserves to meet payroll and the rest of its bills and would start coming up short in May. The table below, taken from Volume I of the MTA December budget, p. 14, provides the data to make the calculations.

(*includes adjustments of ($577 million) from use of reserves, etc.)

Getting bailed out by City and State government won’t work. The City and State are anticipating the major downturn in the economy severely affecting their own budgets. A new report by the State Comptroller’s office shows the State’s tax revenue could drop $4-7 billion below predictions from when the governor’s executive budget was released in mid-January.

Both governments have $6 billion or more in reserves and short-term borrowing powers, but will need these funds to sustain other government employment, the health care system, and public assistance, and will likely soon need to be bailed out by the federal government themselves. At best the City and State could squeeze out about $250 million each in the month of May for the MTA, but after that the federal government has to step in. Only the Feds have the unlimited borrowing power to stem the tide. The MTA will need large government cash infusions within the next several months.

The Capital Plan and Congestion Pricing
Both Governor Cuomo and Mayor de Blasio recently recognized the Trump administration was likely stalling the approval of congestion pricing, the $15 billion centerpiece of the long-term funding of the next MTA capital plan, which includes many important projects like re-signaling several subway lines. The Federal Highway Administration has to approve the State’s plan because our roads affect the Interstate Highway System.

Perhaps the national impulse to drop partisan rancor might diffuse hostility on this point. Maybe. New York might still need to await a Democratic victory this fall to assure that, sooner or later, congestion pricing will be approved by the presidential administration. But between Donald Trump and the new coronavirus, some parts of the MTA capital plan will likely be delayed until 2022 or beyond. The MTA’s capacity to operate needs help right now.