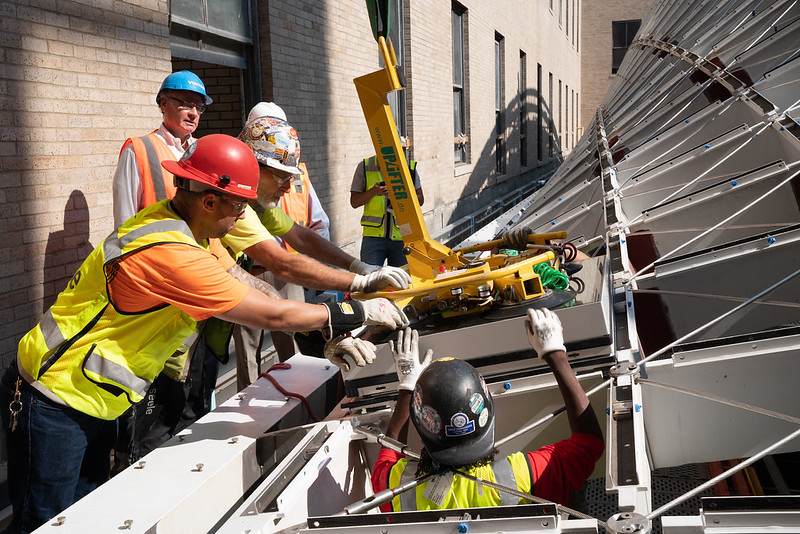 Construction workers, and many others, can benefit from prevailing wage expansion (photo: governor's office)

Massive unemployment following a period of slow recovery left 19 percent of Americans out of work. That was in 1938, when New York officially wrote the prevailing wage into the State Constitution, requiring projects that receive taxpayer funds to pay fair wages to their workers. Still deep into the Great Depression, New Yorkers understood that blue collar workers were the foundation of the economy and key to sustained economic growth.

New York has an opportunity to provide a powerful economic stimulus at a critical time in our history by closing a loophole in its prevailing wage law so that private projects receiving significant public subsidies are covered. The underlying principle of the prevailing wage is straightforward: when public funds are used to subsidize and incentivize construction, public assistance should not be used to drive down wages or undercut benefits. It should instead uphold a community’s labor standards. This policy protects local economies and small businesses by maintaining higher consumer demand for goods and services.

Much has changed in the way projects are procured and financed since the prevailing wage was enacted by statute in 1894 and written into New York’s Constitution in 1938.  Today public resources are leveraged creatively to attract private economic development. State policy needs to reflect this modern reality. However, New York is one of only 11 states that enable private developers to receive public assets without paying prevailing wages and benefits.

There are many reasons why expanding the prevailing wage is good public policy, especially during a weak economy. These standards provide a powerful economic stimulus for working families and local communities while generating much needed tax revenue for public programs. That’s how it helped spur New York’s economy during the tail end of the Great Depression.

The economic impact is significant. Total family income for construction workers is estimated to be at least 12.5% higher in prevailing wage states. Every dollar spent on prevailing wage jobs is estimated to generate $1.50 for local economies. Fair wages empower working families to buy cars, homes, appliances, and clothing. More discretionary income means larger turnout at restaurants and theaters and a greater ability to secure the necessary savings for education, health care, and retirement.

Stimulating New York’s economy, increasing state revenue, and wise management of public resources has never been more important than now. One very practical and fair way for lawmakers to do that is by expanding New York’s prevailing wage law, and they should do it now.