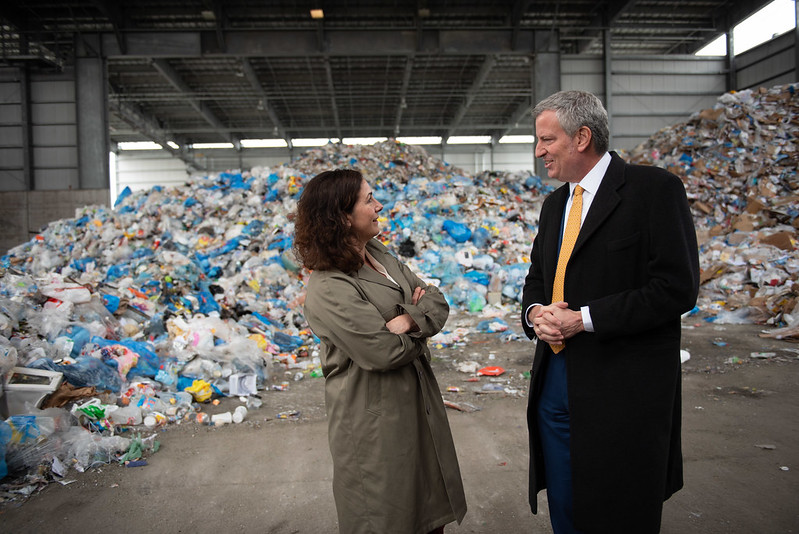 Even as the global COVID-19 shutdown produces fortuitous environmental benefits such as cleaner air due to a huge decline in travel, the U.S. Environmental Protection Agency is cynically using the pandemic to justify backtracking on pollution standards and enforcement, easing a path for climate change and related catastrophes to continue unabated. This is deeply concerning. By some measures, last winter was the warmest ever recorded, and the 2020 hurricane season is expected to be more active and dangerous than normal.

Sustainable waste management remains one of the vital environmental policy areas in which municipal and state governments retain full control. As New York City enters a budget process filled with painful choices, the mayor should rethink the hasty decision to suspend compost collections, and should preserve the Department of Sanitation’s (DSNY) organic waste recycling programs. These are critical local climate change initiatives that also provide good, green jobs our communities will desperately need during this recession.

Food scraps, food-soiled paper, and yard waste comprise more than one-third of what New Yorkers throw out, and residential food waste will likely increase as more people eat at home during the emergency. When buried in landfills, as most of this material is, these organic materials emit methane, a greenhouse gas about 30 times more potent than carbon dioxide. Modern organics composting and recycling facilities can transform food scraps and other organic waste into a nutrient-rich soil or fertilizer and renewable energy sources – but only if we sort and collect organic waste separately from other recyclables and trash. Without continuing and expanding our organics recycling capacity, we won’t be able to move the needle on this major greenhouse gas source anytime soon.

Composting and recycling waste also create and sustain far more jobs than exporting garbage to landfills and incinerators. Although relatively small, New York City’s organics programs already employ more than 100 uniformed sanitation workers in collections alone, in unionized jobs where safety, training, and benefits are available. Dozens more workers are employed at food scrap drop-off sites, local composting facilities, and in other green jobs. Rather than hastily axing these positions, we should view sustainable waste management as a green jobs pipeline at a time when New Yorkers are struggling more than ever.

While recycling is often an easy target for cash-strapped local governments facing a grim fiscal picture, recycling programs cannot simply be switched back on after the economy recovers. Temporary suspension of activities that place our heroic sanitation workers at any additional risk of infection may be necessary, but the cuts to compost collection appear more long-term. Successful diversion programs require widespread public participation, years of ongoing education, and behavior changes by millions of individuals and businesses. Note that the city has only just started to approach the recycling levels achieved two decades ago before Mayor Bloomberg suspended metal, glass and plastic recycling in the aftermath of 9/11.

New data suggest that New Yorkers want to keep composting and recycling during this crisis. In March and the first week of April, residential compost collections continued unabated in the communities where the program is well-established, and New Yorkers separated more food scraps in their brown compost bins this March than they did in March 2019.

Other cities, including San Francisco and Seattle, have continued to treat compost collection as an essential service, despite implementing some of the strictest stay-home orders in the nation. Early reports suggest residents and businesses continue to diligently separate food scraps, yard waste, and other recyclable materials.

We know our leaders care about recycling too. In recent years, the Sanitation Department, the City Council, and the Mayor’s Office have taken critical steps to expand and normalize organic waste recycling. By last year, Sanitation was collecting and recycling about 250 tons of organic material per day.  The city is also poised to require and incentivize greater participation in food waste recycling by businesses, using a new commercial waste zones system. Several elected officials have emerged as champions of organics recycling and sustainable waste management, including City Council Member Antonio Reynoso, who chairs the Council sanitation committee, and Speaker Corey Johnson, both of whom fought to pass the landmark commercial waste zones bill and have called for citywide, mandatory food scrap recycling.

These programs should be seen as essential services, cornerstones of our climate mitigation strategy, and a source of good jobs for communities that will desperately need them. New York City must prioritize our recycling and organics composting programs.