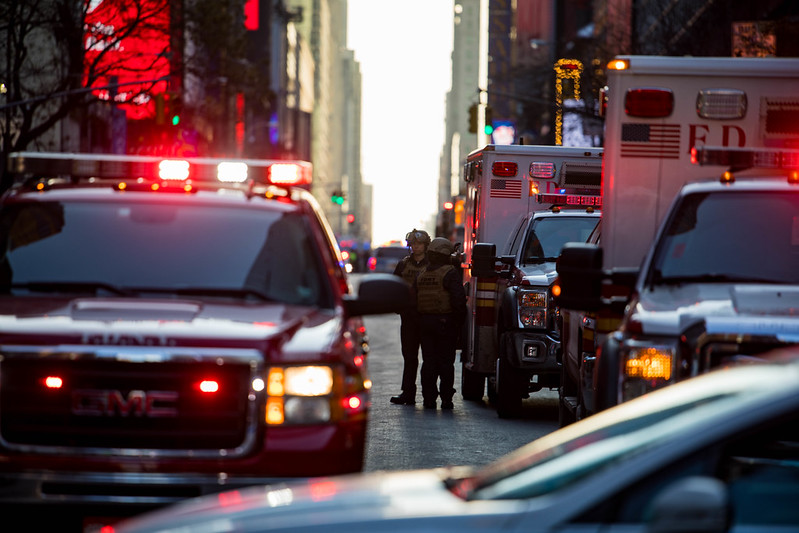 A beautiful, clear April evening in Manhattan. No traffic, which is down 84% overall in the city, says StreetLight. Out of nowhere a screeching siren pierces the air. Many minutes later an ambulance appears—SeniorCare—blaring a siren that measures 124 decibels, higher than a jet takeoff or a thunderclap, the loudest natural sound on earth. The few people on the street cover their ears in pain as the noise gets ever louder, remaining in the air for several more minutes even as the ambulance disappears from sight.

Why the deafening siren on an otherwise quiet night? The argument has always been that sirens are needed to move traffic out of the way in emergencies, so that responders—firefighters, police officers, medical technicians—can make their way as quickly as possible. But this argument fades as traffic disappears under the pressure of the COVID-19 pandemic that has shut down the city, forcing worried New Yorkers to shelter in place as the sirens heighten and prolong their anxiety. We’re living in a strange new world of danger and disease. The often-interminable sirens are becoming the defining sound of the pandemic in New York City, throughout all five boroughs, much as the distinctive European siren once defined World War II.

Ironically, even though noise complaints, including sirens, have for decades topped the quality-of-life list of complaints by residents to elected officials, no methodologically sound, controlled study has ever been done on the underlying assumption that justifies extraordinarily loud sirens in New York: Do sirens effectively expedite emergency vehicles? And do ever louder sirens carrying ever greater distances expedite vehicles faster and more efficiently? In other words, do sirens make us safer? The few studies that have been done show that very little time is saved by emergency sirens, as concludes a major literature analysis for the federal Emergency Medical Services.

Anxiety in Anxious Times
A recent review of medical research articles for the British journal Lancet on the psychological impact of disease outbreaks determined that quarantine can trigger depression, irritability, insomnia, post-traumatic stress symptoms, confusion, and anger. For people quarantined and on edge, sirens can become intolerable. After all, high-pitched, ear-splitting emergency sirens are intended to generate fear and anxiety in nearby human beings—and they succeed. For most people, noise levels over 70 decibels provoke physiological changes, constricting blood flow to the extremities while increasing it to the brain.

Yet sirens operate way above 70 decibels, meaning they have traumatic effects on people almost by definition. The specifications for sirens on New York City fire engines have long been set for 118 decibels at 50 feet. According to manufacturers, ambulance sirens range from 110 to 129 dB, which means that even at their lower end ambulance sirens are dangerously loud.

To put these decibels, which are measured on a logarithmic scale, in perspective: Quiet breathing registers 10 decibels; your refrigerator humming, about 40; quiet conversation, around 60; shouting across a room, 75. A sound of 40 decibels will awaken sensitive people; 70 will wake up almost anyone. Back when Midtown traffic was heavy it ranged from 80 to 95 decibels, while an express subway train roaring through a local station, such as 86th Street on the West Side, regularly hits 110. Noise of 120 decibels causes discomfort and sometimes injury.

Emergency Responders
But it’s not only the citizenry endangered by excessive sirens—it’s also the emergency responders themselves.

The National Institute for Occupational Safety and Health warns that two years of regular exposure to 90 decibels will produce hearing loss. For decades agency heads—and siren manufacturers—discounted any damage to emergency personnel, arguing that sirens were directed away from them. But common sense says that if people standing on the street—or 40 floors up in a high-rise building—can hear the ear-shattering sirens, then so can personnel in the vehicle.

In 2017, some 1,500 current and retired firefighters from New York joined 3,000 first responders from Chicago, Boston, Pennsylvania, and New Jersey in a mass lawsuit against siren manufacturer Federal Signal Corp, arguing that the sirens left them with serious hearing damage. After losing a jury trial in Chicago, the company successfully argued in federal court that the sirens needed to be heard from all directions. The court did not address the question of hearing loss. Roughly 26% of firefighters nationally report suffering regularly from tinnitus (ringing in the ears).

Richard E. Fairfax, Director of OSHA’s Directorate of Compliance Programs, noted that in addition to hearing loss, with “consistent exposure to 95 decibels occurs, there exists a serious threat to the cardiovascular system, more specifically an elevation in systolic blood pressure (hypertension), digestive, respiratory, allergenic and musculo-skeletal disorders, as well as disorientation and reduction of eye focus, potentially leading to the increase of accidents and injuries.”

Protocols
Official New York State policy calls for the siren to be sounded when lights are on but this varies widely in practice by agency and by employer. On a sunny Saturday morning last month an MTA bus pulled over on Amsterdam Avenue. Lights flashing but with no sirens, four NYPD patrol cars answered a distress call from a bus driver who said he was being assaulted by a passenger.

Meanwhile, a siren blared far away. Quite a bit later a Mt. Sinai ambulance appeared, driving very slowly up a traffic-free Amsterdam, lights flashing and sirens screeching at a decibel level of over 120, high enough to temporarily deafen most people.

Said one of the police officers: We try to restrict our sirens as much as possible. Our drivers are sensible and take proper care, but we know how much sirens disturb people. Said an ambulance driver: Mt. Sinai protocols call for us to use full sirens and lights. It’s to protect you as much as to protect us.

But why, in a time of extraordinarily high levels of anxiety for many New Yorkers, especially as they’re confined to their homes, and with streets often nearly empty, should the protocols for high-decibel sirens remain unchanged? Mt. Sinai ambulances (as well as those from once-independent hospitals like Lenox Hill) seem always to be running with full sirens, no matter how slowly they’re proceeding. The slowness just worsens the pain of those assaulted by the noise.

Aware of intense hostility to the sirens on its 25 ambulances, Mt. Sinai experimented last year with different options, including the high-low, European-style siren. After playing the sirens at community board meetings to solicit public opinion, Emergency Medical Services Director Joseph Davis concluded, "People hated them all, but the 'high-low' was least intrusive. It didn't have that piercing sound." A 40-year EMS veteran who himself suffers hearing damage from the job, Davis fully understands the consequences of sirens.

The presumption that every ambulance is on a life-saving mission is far from true. Year-to-date FDNY data show an overall 73 percent increase in 911 calls that resulted in “refusals of medical aid,” or RMAs, meaning that the person refused to be taken to a hospital after the ambulance arrived. In the first half of April the number of refusals surged 235%.

Part of the problem is that dispatchers do not solicit sufficiently precise information. Last month four black cars and an ambulance drove the wrong way on our empty street, sirens blaring. They parked haphazardly, and left the lights flashing. The four drivers pushed by the doormen, heading in different directions and getting lost. The emergency call turned out to have been utterly erroneous—a housekeeper unable to access her employer’s apartment had contacted a neighbor, who called for an ambulance. The employer, who had been on the phone, refused to open the door for the housekeeper—or the EMTs. Surely the dispatcher should have obtained more information about the nature of the “emergency,” which was non-existent.

Overall 911 call volume is way up—202,000 calls year-to-date compared with 167,000 for the same period last year. How many are true emergencies? A rigorous study would be helpful.

Quiet Streets
As the coronavirus has raged in New York it has cleared many streets of car and truck traffic, inducing unusual quiet that is broken by little except sirens. Ironically, manufacturers deliberately calibrate sirens to be heard above traffic under the assumption that the most important factor is moving cars out of the way. Pedestrians have seldom been considered, even as pedestrians have become increasingly important to urban life. And as New York streets have emptied out in the last several weeks, the sirens have continued to blare for previous levels of ambient noise, making them far louder in practice since there is little or no environmental noise cushioning the sound.

Excessive sirens are a direct consequence of excessive traffic. If the traffic is curbed, as so many New Yorkers urge, then the sirens can be modified as well. This is the moment.

Urban designer and architect John Massengale proposed a radical innovation on Streetsblog: A network of what he calls quiet streets, many of which would be car-free or nearly car-free, for example: “In the long run, Broadway north of Columbus Circle could be a pleasant street with light traffic on both sides, while Columbus Avenue or West End Avenue might be the best streets for little or no traffic. These are just quick ideas. A broad study of traffic on the Manhattan grid might have different and better long-term solutions for breaking the car culture.”

Not only would quiet streets be productive for neighborhoods, they would offer a route to rethinking deployment of emergency vehicles, which would be able to move more freely—albeit carefully—while employing far less aggressive sirens. Without traffic registering 80 decibels and above, sirens would have no justification for their now excessive levels of 120 decibels.

The Future
All of this needs to be rethought in the coming months.

In his masterpiece, Plagues and Peoples, historian William McNeill makes a crucial point for our time: All historic plagues have had a second and sometimes third or fourth wave of contagion after the first. When this wave of COVID-19 hospitalizations slows, New York needs to prepare for the next wave—and that means seriously analyzing and probably rethinking its delivery of emergency medical services.

Manhattan City Council Members Carlina Rivera and Helen Rosenthal have already started, introducing a bill to require the gradual introduction of high-low sirens, and to mandate a maximum sound level not to exceed 90 decibels, which would constitute an enormous change.