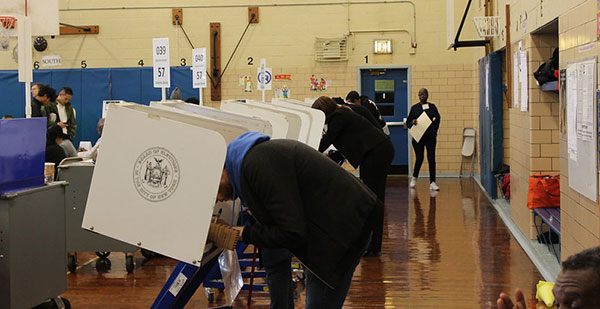 Questioning which New Yorkers can go to the polls (photo: Gotham Gazette)

Practicing social distancing is by no means easy, but the guidelines are simple: maintain six feet of distance from others, avoid crowded environments, public bathrooms, and shared dining facilities, and to blow off steam, go outside. Stick to the guidelines, health officials assure us, and we can all help protect each other, especially the vulnerable.

But many of the most vulnerable people during the COVID-19 crisis are those whom most of us will never see and for whom social distancing is simply impossible: people behind bars. Prisons were not designed to prioritize personal space; moreover, many have faced overcrowding for years. At least 462 incarcerated people in New York state have tested positive for the novel coronavirus and 1,204 prison staff have as well. According to the Marshall Project, the number of undiagnosed infections in prisons is likely much higher. Tragically, at least 373 incarcerated people have died across the country from COVID-19 related illness.

Yet even after facing those conditions while paying their debt to society, many of those who complete their sentences and reenter the public will have no voice in our collective future. That’s because New York, unlike 19 other states and Washington, D.C., denies people on parole for felony convictions the right to vote. It’s time to fix this with new legislation.

To be clear, thanks to Governor Cuomo’s issuance of voting rights pardons since 2018, most people on parole can currently vote. The governor’s staff began conducting a monthly review of everyone recently released on parole and the governor uses his pardon power to individually restore voting rights to each person living in the community and successfully completing the terms of their parole.

But the process is more cumbersome than it needs to be, both for the people rightfully having their voting rights restored and for the government. Moreover, voting rights shouldn’t depend on the discretion of one person. The governor has used his pardon power justly, to welcome people living in our communities into our democracy. But a future governor could depart from that practice—we’ve seen it happen in other states.

That’s why we are among the state senators co-sponsoring Senate Bill 1931. This legislation would make rights restoration automatic upon release from prison and provide those released an opportunity to register to vote right away.

We prioritized democracy reform at the beginning of this legislative session because we’ve heard loud and clear from our constituents that it is what they want. We need to make it the law that people on parole can vote, not just the policy of the governor. These are our neighbors. They work and pay taxes, and they should have a say in choosing those who levy them. They send their children to public schools, and they should be able to decide who oversees those schools.

State after state has acknowledged this obvious truth in recent years. In 2019 alone, Colorado, Nevada, and New Jersey passed laws restoring the right to vote to everyone living in the community, with New Jersey’s governor signing that state’s law this past December.

There is no good reason we shouldn’t do the same, and formally codify the governor’s policy here in New York. The criminal justice system has determined that each person on parole has served their time and is ready to return to their community. We all have an interest in welcoming them back with open arms and encouraging healthy reintegration. Until we change the law and make clear that their voting rights are not something bestowed upon them by the generosity of the governor, we send exactly the wrong message: that their voices don’t matter and they don’t have a real stake in what happens in their communities.

In fact, the history of New York’s criminal disenfranchisement laws makes clear that they were never aimed at accomplishing some good policy goal. They date back to a 19th century attempt to evade the mandate of the Fifteenth Amendment to the U.S. Constitution—to deny black men the right to vote.

These days the law is still discriminatory, but it also serves to sow confusion and waste government resources. Because the governor has to use his pardon power to restore voting rights, the process is needlessly complicated. Each month, the state corrections department sends the governor a list of everyone released and on parole the previous month. The governor’s staff then individually confirms each person’s eligibility before issuing a voting rights pardon. His staff then continuously monitors the parole status of each of the 30,000 people with a pardon to ensure they remain eligible.

This isn’t just a lot of work, it means that it is still impossible to give a simple, straightforward answer about whether people on parole can vote. Since the restoration process is not automatic, there is a four- to six-week gap between when someone is released from prison and when they have their rights restored. That means people cannot be told they have the right to vote on their way out. And we’ve heard that even people who do have a pardon have faced skepticism or misinformation when they try to register.

The bill we are co-sponsoring would clear up the confusion. It would set thousands of New Yorkers immediately on the path to reengaging in a positive way in their communities, something that has only become more important in the age of COVID-19. We urge our colleagues in the Legislature to join us in passing this bill, continuing New York’s journey to becoming a national leader in democracy.