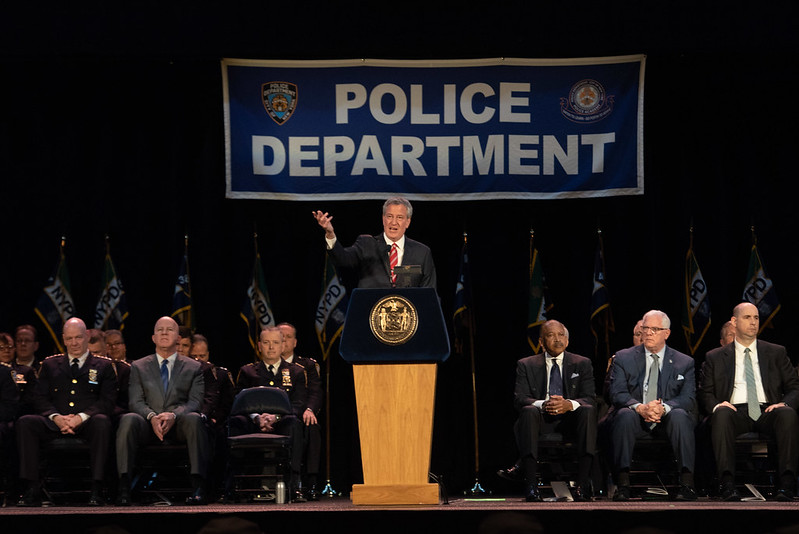 De Blasio forcefully demanded swift action by authorities in a city half-way across the country. He then proceeded to fail completely to stop police brutality in his own city on Friday and Saturday nights, when black New Yorkers and allies took to the streets to demand justice for Floyd and an end to institutional racism. The NYPD deployed thousands of officers who immediately created a war-like environment and escalated matters, repeatedly initiating violence against community members.

It takes a particular kind of political and moral cowardice to call for justice a thousand miles away while failing to protect black and Latino communities from racist policing in his own city. Martin Luther King Jr. forewarned us about politicians like de Blasio, ”those more concerned with ‘order’ than justice.”

The killing of George Floyd was horrifyingly similar to the NYPD’s killing of Eric Garner. In broad daylight, a police officer choked the life out of a black man on a sidewalk. Cries for help went unheeded by the other officers on the scene.

For more than five years, de Blasio sat on his hands, avoiding any and all responsibility for pursuing discipline or accountability for all officers involved in Eric Garner’s killing. Now former officer Daniel Pantaleo, caught on video choking Garner to death, remained employed by the NYPD for more than five years, even collecting overtime. When the department’s trial revealed egregious misconduct by other officers present, the mayor did all he could to turn the page following the firing of only Pantaleo. Eric Garner’s mother, Gwen Carr, continues to organize and call for all of the officers responsible to be fired. The mayor continues to ignore her calls for accountability and justice.

The murder of Eric Garner is the most high-profile case, but by no means the only time de Blasio spectacularly failed to hold the NYPD accountable for brutalizing and killing black and Latino New Yorkers. Delrawn Small, Jazmine Headley, Saheed Vassell, Sergio Reyes, Kawasaki Trawick -- they may not be as well know as Eric Garner, but their stories are other glaring failures on the part of the mayor to ensure the NYPD is held accountable for brutality and murder. These are only the cases the public hears about. But officers escaping without any discipline for misconduct or brutality, even in cases where people are killed, is the norm not an anomaly.

More recently, during the COVID-19 pandemic, numerous videos of NYPD officers violently enforcing social distancing in black and Latino communities showed the type of violent and biased policing that leads to the deaths of community members like George Floyd, Breonna Taylor, Tony McDade, Eric Garner, Delrawn Small, Saheed Vassell, and many, many others. Police brutality doesn’t take a break for pandemics.

Black and Latino communities have not only suffered because our state and city governments failed to prepare for the disproportionate impact of COVID-19. Mayor de Blasio’s failed approach, where he proactively decided to criminalize a public health crisis before claiming to reverse course, has meant policing enforcement that continued to target our communities.

The mayor has spent much of the pandemic defending and downplaying the NYPD’s discriminatory and dangerous actions, even going as far as victim-blaming black New Yorkers for not following orders and cooperating. A recent video of police brutality during the pandemic shows what easily could have resulted in a similar tragic outcome to George Floyd’s or Eric Garner’s murder. Three weeks ago, following a violent take-down, NYPD officer Francisco Garcia sat on the head and neck of a prone Donni Wright. Wright luckily escaped with his life. De Blasio was much more tempered in his condemnation of the NYPD following that incident and refrained from any calls for swift consequences for the officers involved.

Friday’s night’s numerous incidents of police brutality made the problem even clearer, with officers running amok, beating, pushing, and pepper-spraying New Yorkers. Mayor de Blasio responded with a sad sort of “both sides-ism,” and nothing resembling a true commitment to firing abusive officers and holding the department accountable throughout the chain of command. On Saturday night, after new incidents of blatant policy brutality, the mayor even came to the defense of officers who had driven into protestors with an SUV.

As de Blasio’s second and final term comes to an end, he has cemented his legacy on policing. He was unwilling to hold the NYPD accountable for misconduct and brutality, failed to end “broken windows” policing, and chose to regurgitate talking points about training and neighborhood policing, rather than heeding the calls for justice and meaningful reform. If the mayor is serious about addressing police brutality and valuing all black lives, he should use the remainder of his time in office to pass and support strong legislative reforms to increase police accountability and transparency, while also taking sweeping executive action to change the department that he purportedly controls.

The Mayor should forcefully advocate for full repeal and not a watered down replacement of state Civil Rights Law 50-a in order to make public all police disciplinary records. He should ensure the NYPD swiftly terminates Officer Garcia, all of the officers involved in Eric Garner’s murder, and any officer who abuses their power, including in this week’s protests. And as the city gets closer to finalizing the fiscal year 2021 budget, the mayor should significantly reduce the NYPD budget and headcount and direct cost-savings towards the Department of Youth and Community Development, education, housing, housing the homeless, and social services that keep our communities safe and healthy.

The frustration and outrage manifested in this week’s protests are not merely in solidarity with communities in Minneapolis demanding justice for George Floyd. They are a response to the failure of Mayor de Blasio and decades of previous elected officials who have sanctioned daily state violence against black people in New York. They are the manifestation of generations of black people who have struggled to breathe with the weight of America’s anti-black racism on our necks. Almost six years after Eric Garner’s tragic murder at the hands of the NYPD, we still can’t breathe.

***
Kesi Foster is the Co-Director of the Youth Power Project at Make the Road New York. On Twitter: @BemKesi @MaketheRoadNY.