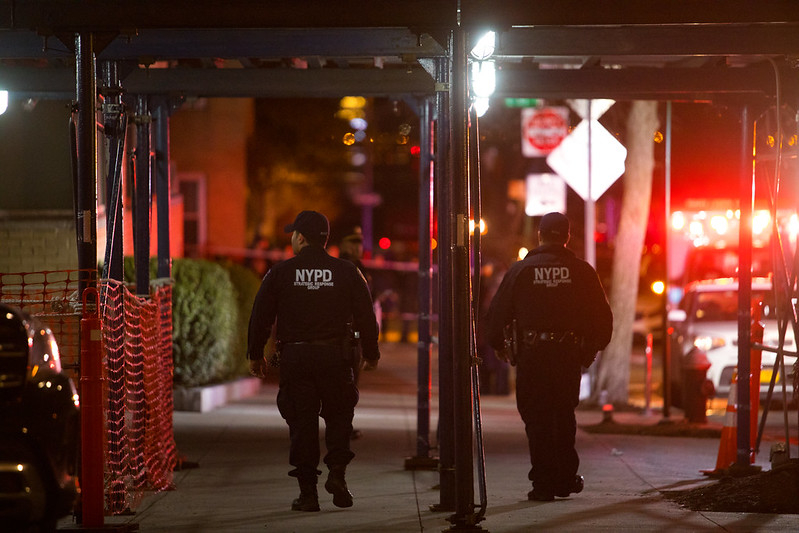 What NYPD Commissioner Dermot Shea described as “nearly flawlessly executed” police action recently in the Bronx was nothing less than a nightmare for my daughter and the other protestors who gathered there, as well as many of their loved ones like me. Those sworn to serve and protect in our city instead did the exact opposite and attacked and arrested New Yorkers expressing their constitutional rights.

On Thursday, June 4 at the protest in Mott Haven for George Floyd’s murder at the knee of a police officer, my daughter, a 20-year-old Latina, and her three friends were about to leave as the time was approaching the 8 p.m. curfew. At 7:53 they found themselves completely surrounded by the NYPD, unaware of the “kettling” technique encircling them. They edged to the side but the police said “it’s too late.”

When the clock struck 8, the police struck. My daughter heard a white police officer announce to a young black woman, “Welcome to the Bronx,” and saw him proceed to pelt her with his nightstick.

The four women were separated into pairs, all getting arrested for protesting peacefully, and hemmed in before the curfew. What unfolded was harrowing and additionally upsetting, further evidence of how the police wreak havoc on the people, in part through using arrests as punishment, and purposefully sowing confusion and anxiety.

They were handcuffed and taken into custody, to different detention centers. Two of these young women were taken to Queens and two to the Bronx. One, who is white, was released at midnight. She called me to let me know they had been arrested but she had no idea where my daughter had been taken.

She told me my daughter’s mother was already on her way to meet her at the Queens site, so I decided I would go to one of the detention sites in the Bronx. Thirty minutes later it was confirmed my daughter was taken to the Queens site when another of her friends, who also had been released, had spotted my daughter waiting outside to be processed.

After 30 minutes at the Queens location, I approached three officers standing outside and asked if I could get my daughter out. They replied “that’s impossible,” and asked me if I was sure she was there. “Find out where in the line she was, because two vans just left for the Brooklyn detention site.”

I returned to the two friends who had been released and asked where in the line my daughter was and one confirmed she was in the back of the line. We approached my daughter’s mother and we decided she would remain at the Queens site, just in case, and we headed to the Brooklyn detention site.

The three of us arrived at the Brooklyn detention at 3:30 a.m. My daughter’s mother met up with us about 6 a.m. and we all waited for her release at 1 p.m. on Friday, June 5.  She was arrested for peacefully protesting just after 8 p.m. and released 1 p.m. the next day -- 17 hours later.

She was then able to tell us more about what she was subjected to.

She and others were handcuffed for eight hours straight with their hands behind their backs, made to stand in the rain for two hours, sit in a hot van crowded together with no ventilation, all the cops not wearing masks, and offered no water. One person reported that an officer at the Brooklyn site remarked, “if you want some water, grab a cup and go to the toilet.” But they were not allowed to use the restroom, several later reported they had to urinate in their pants. No food for hours, and when they were given something they received sandwiches in plastic that were moldy and laced with ants. Some were physically hit and thrown to the ground and verbally abused all night long. A young black woman cried how she was called the n-word repeatedly by a black male police officer.

This is a police state. This is political repression. This is systemic use of military-style torture and terror tactics to beat the compassion and activism out of these young people. This has been reported to be taking place at detention centers across the city as the police hold a select number of detainees to make examples of them and give these groups “DATs” (desk appearance tickets) in place of summonses. All for protesting peacefully, no looting involved, and they were encircled and unable to leave before the curfew event hit.

These state crimes of brutality must be reported and legally prosecuted. The city needs to pay everyone who received a DAT damages for how they were treated. This is unlawful, illegal, and the world needs to know what happened to many people who were held for hours beyond necessity, not that they should have been taken in the first place. There is a virus of police violence that runs rampant in the streets of our city run by a “progressive” mayor. Mr. Mayor, as we are both parents of young women peacefully protesting police brutality -- and being arrested doing so -- do not use the bodies of our children to redeem your relationship with the NYPD.

While we must not be made to endure such trauma, it furthers our resolve: the people united will never be defeated.

***
George Emilio Sanchez is a writer, performer, director, and professor.