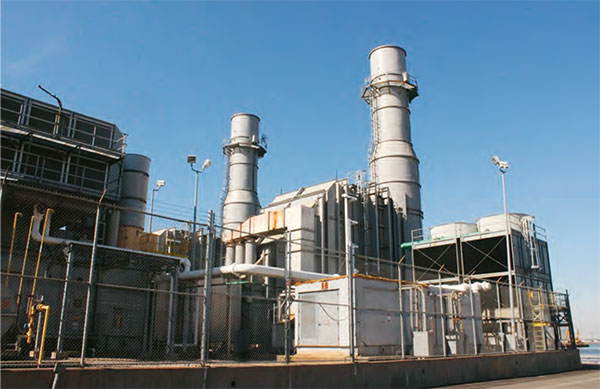 As the weather warms and we head into the summer, we again expect record-breaking temperatures. Thousands of New Yorkers worry about accessing air conditioning units and surviving a hot summer in cramped apartments, and many will struggle to balance higher electricity bills from air conditioning against costs of health care, food, and rent. But most people don’t worry about the increased electricity demand from widespread air conditioning use during hot days and heat waves.

Most New Yorkers are unlikely to know about the polluting power plants located primarily in communities of color and low-income communities like the South Bronx and Sunset Park that fire up to meet peak electricity demand in New York City when millions of air conditioning units are running.

These half-century-old fossil fuel power plants, known as “peaker plants,” spew high levels of fine particulate matter and nitrogen oxides into the air in communities already burdened with other polluting facilities such as solid waste transfer stations and crowded truck routes. On the hottest days of the year, when air quality is already poor, turning up the air conditioner in Manhattan can mean even more air pollution in environmental justice communities like Sunset Park, Mott Haven, and Hunts Point, where childhood asthma rates are more than double other areas in the Bronx.

New research closely links chronic exposure to higher levels of air pollution such as fine particulate matter and nitrogen oxides to higher mortality rates from COVID-19. Long-term exposure to high levels of air pollution, along with extreme heat, subject already vulnerable communities to greater rates of hospitalization and death from climate events. Health disparities are exceptionally prevalent in neighborhoods like Sunset Park where 22% of the community does not have access to health coverage.

New York City’s peaker plants are a prime example of environmental discrimination: the disproportionate burden of pollution and environmental health hazards inflicted on communities of color. Studies have shown that Black and Latino communities across the United States suffer disproportionate levels of air pollution, even as the most privileged are disproportionately responsible for the consumption of goods and services that generate this pollution. Neighborhoods like Hunts Point and Mott Haven in the South Bronx rank highest on the city’s heat vulnerability index, but have one of the lowest shares of air conditioner ownership in the city. These neighborhoods are home to four peaker plant turbines that run among the most frequently of all the city’s 16 peaker plants – often on hot, poor air quality days.

Pollution isn’t the only problem with peaker plants. As revealed in a report released this month by the newly formed PEAK Coalition, peaker plants are a huge expense for electricity customers. Over the past decade, the city’s peaker plants have cost city residents approximately $4.5 billion in electricity bill payments. And this price tag isn’t even for use of the peaker plants – it’s simply the cost of having the peaker plants sit around, available for use in case they’re needed on those peak-demand days. Most of the money has gone to private, out-of-state companies that own the oldest and most polluting plants in the city’s peaker fleet. Spending billions of dollars going forward to prop up the use of antiquated fossil fuel power plants with few to no pollution controls makes no sense.

The solution isn’t for New Yorkers to stop using air conditioning or to feel guilty about it – access to adequate cooling during dangerously high heat days should be a human right, not a privilege. The city must update the current polluting, archaic, and inefficient system for meeting peak electricity demand and replace fossil fuel peaker plants by investing in energy efficiency upgrades, large-scale renewable energy generation and battery storage, and distributed smaller-scale renewable energy generation and storage. Renewable energy and storage will not only reduce air pollution but can also enhance community resiliency in the face of storms or blackouts and create green, local jobs and workforce training opportunities.

Under New York’s groundbreaking climate law passed last year, the Climate Leadership and Community Protection Act, the state must reform this system to achieve a carbon-free electricity generation system by 2040. But there is no need to wait that long – the technology exists to transform the system. We just need a commitment to prioritize the health and resilience of our neighborhoods. Communities like the South Bronx and Sunset Park, among the hardest-hit in the current pandemic, can’t afford to wait another 20 years to reduce air pollution.

***
Rachel Spector is Director of Environmental Justice at New York Lawyers for the Public Interest; Elizabeth Yeampierre is Executive Director at UPROSE; and Dariella Rodriguez is Director of Community Development at The Point CDC. All three are members of the PEAK Coalition. On Twitter @NYLPI & @UPROSE & @THEPOINTCDC.