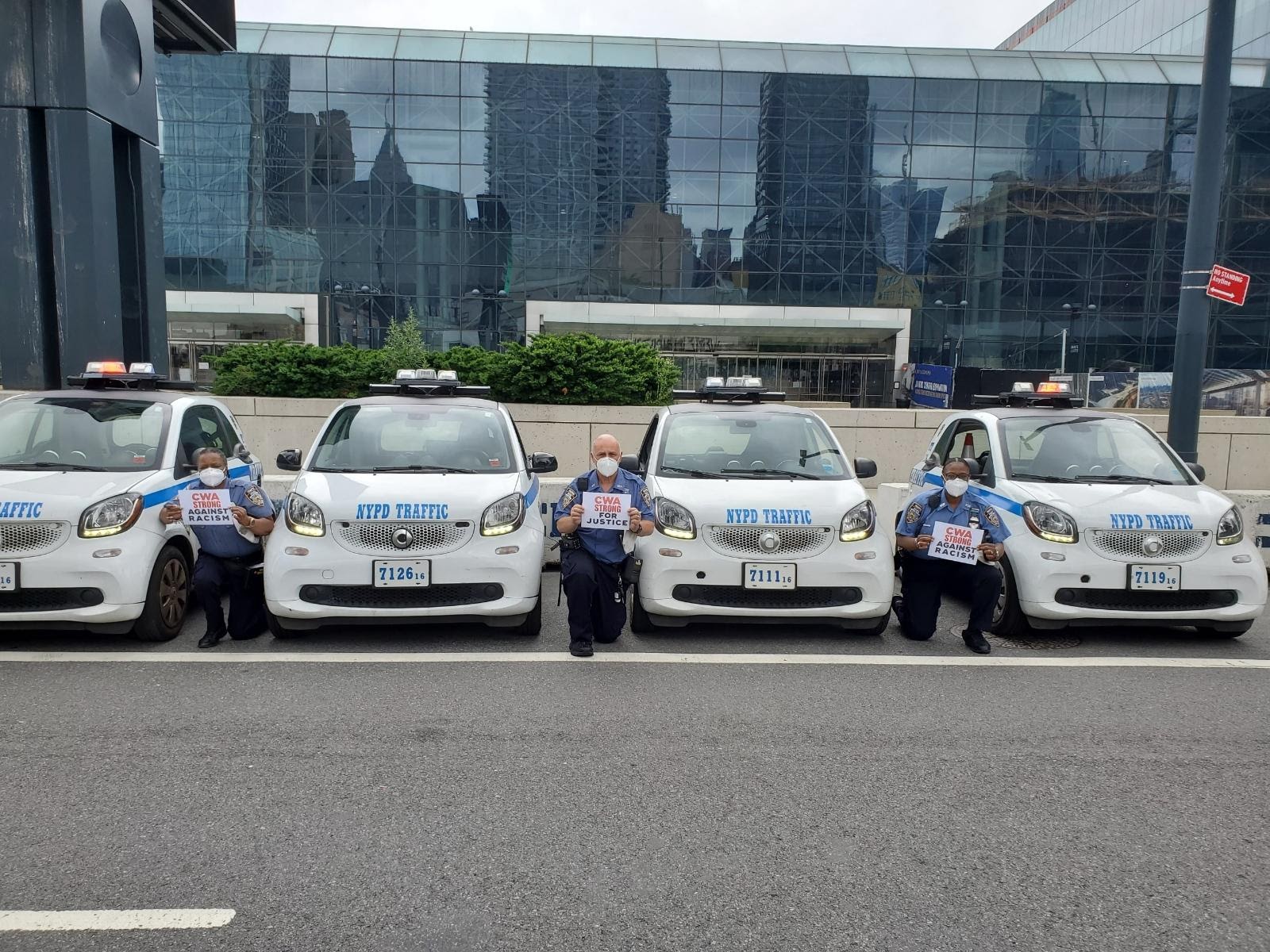 On Thursday, June 11, hundreds of New York City Traffic Enforcement Agents and Supervisors stopped work for eight minutes and 46 seconds to commemorate the tragic murder of George Floyd in Minneapolis. Employed by the NYPD, these members of the Communications Workers of America (CWA) were participating in a nationwide CWA job action to support the massive protests sweeping the country on behalf of racial justice and an end to police violence.

Is it surprising that these NYPD employees staged a job action for racial justice? If you knew who they were, it wouldn’t be. CWA represents approximately 2,800 agents and 400 supervisors who work in New York City Traffic Enforcement. Over 95% of them are people of color—primarily immigrants from Bangladesh and Africa, and Latinos and African-Americans.  Traffic agents are extremely low-paid: their salaries start at just over $41,000 and top out at $50,000 after 10 years on the job. What’s worse, on average, 100 agents each year are physically assaulted by members of the public angered by a parking ticket or a disagreement at an intersection. The verbal insults—many of them racial slurs—are too numerous to count.

That is why it is especially disappointing to see these workers targeted, even inadvertently, by the leaders of two organizations we normally consider allies, in a recent column in this publication advocating the removal of traffic enforcement from the NYPD.

The recent Black Lives Matter protests have sparked an enormous grassroots demand for fundamental reform of the police department, a stance supported by the CWA. But moving Traffic Enforcement out of the NYPD is not meaningful reform—it is merely cosmetic budget-shifting in the name of reform. And such a move would utterly ignore the deeply felt concerns of the 3,200, overwhelmingly of-color workers who would be directly affected.

The authors raise serious concerns about the discriminatory impact of policing practices on Black and brown pedestrians and drivers—practices that CWA and the Traffic Enforcement Agents vehemently oppose. But these issues literally have nothing to do with the TEAs and Supervisors. To list just a few of the misleading arguments:

The authors state that Black and brown New Yorkers receive 89% of the tickets issued for jaywalking or mid-street illegal crossing, but traffic agents have no authority to police jaywalking and never issue tickets for that offense.

The authors cite figures showing that Black and brown drivers are far more frequently pulled over by police and even more frequently searched for drugs and alcohol, but TEAs have no authority to pull cars over.

The bottom line is that CWA-represented Agents and Supervisors are only authorized to issue parking tickets and direct traffic in busy intersections. The only moving violations they ever issue occur when drivers “block the box.” Somewhat ironically, they do issue tickets to drivers who park illegally in dedicated bike lanes, something that Transportation Alternatives supporters surely appreciate.

Why, then, do our members care so deeply about remaining in the NYPD? The answer is simple: they believe the uniform provides a measure of safety. Directing traffic and writing tickets earns these agents no love or affection from most New Yorkers. When the traffic bureau was part of the Department of Transportation, agents were routinely derided as “Brownies.” Assaults—literally physical attacks in which faces were punched and limbs were broken —peaked in the early ‘90s at around 600 per year, a trend exacerbated by the late-1980s scandal in the Parking Violations Bureau. The agents fought for years to achieve "uniform status" in order to gain a measure of respect and security. They deeply believe that if they return to the Department of Transportation, disrespect from the public will increase and the assaults and racial slurs will escalate dramatically.

CWA and the Traffic Enforcement Agents and Supervisors support genuine reform of the NYPD. We want to see an end to the now-endless litany of young Black men who have suffered at the hands of police across the country. But moving traffic out of the NYPD satisfies only one need—the claim of a big reduction in the NYPD budget—and actually changes nothing. And there are 3,200 women and men, mostly of-color, who will be deeply hurt if such a change goes through. We urge the City Council and the Mayor to reject this idea.

***
Bob Master is Assistant to the Vice President of CWA District One and Rebecca Greene is a Traffic Enforcement Supervisor and Member of CWA Local 1181. On Twitter @cwabobmaster.