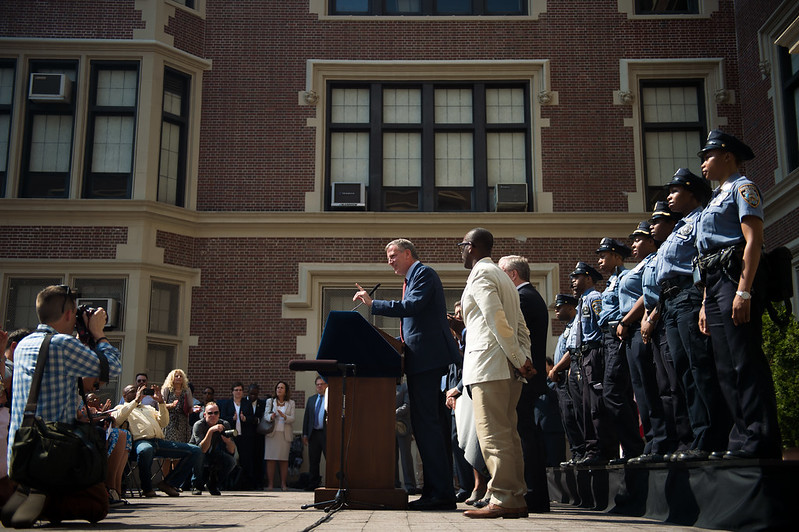 Amid protests spurred by the police killing of George Floyd, activists from Minneapolis to Chicago to New York City are pushing to reduce the presence of police in schools, and a number of school districts are heeding their call. Most recently, New York City Council Members Mark Treyger and Donovan Richards are proposing to end the ties between the New York Police Department and Department of Education.

They have a point. Reducing the number of cops in schools need not diminish safety. However, with 25 of the nation’s largest school districts now outsourcing at least some school safety to police departments, severing those ties will require the development of new methods for de-escalating conflict. Districts will need to learn from successful experiments that engage students, teachers, and administrators in improving school culture in ways that promote both safety and learning.

The call to reduce police presence in schools follows a decades-long escalation. In the 1990s an increase in gun violence in schools led President Bill Clinton to sign The Gun Free Schools Act, which made zero-tolerance school discipline a national movement. The law initially mandated punishments for firearms possession—mandates that were later expanded to include a range of crimes and infractions.

By 1998, in the first takeover of its kind, then-Mayor Rudy Giuliani arranged for the New York police department to take command of the education department’s Division of School Safety; he did so over the objections of at least two schools chancellors. New York City has had more than 5,000 police personnel assigned to schools in recent years, equivalent to one of the largest police forces in the country; by contrast, the combined number of school counselors and social workers was less than 4,300 in 2019.

Violent crime and thefts in schools declined 70 percent between 1992 and 2013 even as some high schools reported an increase in discipline problems after police appeared on campus. Indeed, schools with officers reported five times the number of arrests for "disorderly conduct" as schools without them. A lack of training in “positive behavioral interventions” has led many schools to become “overly reliant” on harsh discipline and to criminalize infractions that, in the past, might have merited a scolding from the principal, according to a recent Clemson University study.

The increased police presence and zero-tolerance policies have had a particularly adverse impact on students of color. Despite efforts under the Obama administration to limit the role of police in school disciplinary matters, students of color have been targeted for suspension and arrest in large numbers nationwide. Although suspensions have declined in recent years, overall arrests have increased; Black students, who make up just 15.5 percent of all public school students, accounted for over one-third of all school arrests, according to a 2018 government study, which found that “implicit bias” was partly to blame for the increase. Black boys are arrested three times more often, and Black girls 1.5 times more often, than white boys.

In New York City, overall suspension rates declined by 39.4 percent in the decade leading up to the 2016-17 school year. While the suspension rate of Black middle- and high-school students also declined during that period, it remained 2.8 times higher than that of white students.

At the same time, the presence of metal detectors, security cameras, and security guards makes kids of color feel less safe in school “physically and psychologically,” according to the National Association of School Psychologists, which can, in turn, have a detrimental impact on students’ ability to learn. (Nor is there clear evidence that the use of such restrictive security equipment is “effective in preventing school violence,” according to the study.)

By contrast, research has shown a strong positive connection between nurturing school environments and learning. A recent study of high-poverty New York City schools, which looked at the impact of neighborhood violence on standardized test scores, found that the performance of students exposed to violence suffered if they attend schools with weak climates; by contrast students who attend schools perceived as both safe and “having the strongest sense of community,” suffered no reduction in test scores even if they were exposed to violence.

Creating the kinds of nurturing environments associated with both safe schools and better education outcomes requires an all-hands-on-deck approach. Schools need to foster new methods, such as peer-mediation and behavior-management strategies that deescalate conflict and put educators—not police officers—in charge of the vast majority of discipline infractions.

Take the case of the Bayard Rustin complex of six small schools in New York City, which, in 2017, began petitioning both the education and police departments to suspend unannounced metal-detector screenings at the school building, where 96 percent of students are people of color. The screenings were conducted by the NYPD even though discipline problems in the building “are rare” and the school principals opposed them—more than 80 percent of students said they felt safe in the school building, according to education department surveys. The New York Civil Liberties Union was brought in to mediate a discussion among the schools and the education and police departments. In 2019, when the NYPD was expected to install permanent metal detectors, the students finally won a partial victory; while Bayard Rustin remained a random-screening site, permanent metal detectors were never installed.

The battle at Bayard Rustin—and the students’ modest success in keeping out permanent metal detectors—was a school culture and curriculum that encouraged students to grapple with real-world problems. The Bayard Rustin complex is run collaboratively with educators at all six schools jointly determining the use of common spaces and policies. Three schools are members of the highly-regarded New York State Performance Standards Consortium, which allows students to complete in-depth, long-term projects, often tailored around student interests, in lieu of most standardized tests.

The fight against metal detectors was led by Bayard Rustin students with the support of educators. Brady Smith, principal of James Baldwin, a “transfer” high school for over-age, under-credited students who struggled at previous schools, and a member of both the performance standards consortium and the progressive NYC Outward Bound network, persuaded his fellow principals to appoint a student advisory council to address the metal-detector problem. He also insisted that the student council include some “marginalized students,” noting: “A lot of schools create pathways for student leadership that appeal to a particular type of student—the extrovert, charismatic student.” For this committee, he wanted the kind of students who would focus on “issues,” rather than having “good events.”

Similar efforts to engage students in critical problem-solving have borne fruit elsewhere. In Leander, TX, a large district outside Austin, a years-long, student-led anti-bullying campaign has not only mitigated a major problem at district schools, but created leadership opportunities for teens. The effort, fostered by teachers and administrators, grew out of a nearly four-decade commitment to a school-improvement philosophy that encourages problem-solving at all levels of the school—from students to administrators.

Despite a growing movement to cut police budgets, too many officials still view the police as a school safety panacea. Although crime in New York City schools is at record lows, Mayor Bill de Blasio has increased the school-safety budget by 25 percent since taking office in 2014. He has also called for a 1.36 percent increase, to $427332 million, in spending on school safety officers next fiscal year, even as he plans to cut $827 million from the education department and prepares to borrow $7 billion to make up for shortfalls in the city’s operating budget.

Getting cops out of schools will present both opportunities and challenges, especially in mitigating the kind of childhood trauma that often leads to school violence and discipline problems. As of 2017, nearly 29 percent of the school incidents in New York City involving police or safety agents involved a “child in crisis,” and resulted in the child being taken to a hospital for a psychological evaluation; by contrast, only 12 percent of the incidents resulted in an arrest.

For the transition to be successful, the education department will need to retrain school safety officers, especially in so-called restorative justice practices that include addressing sources of friction before they escalate, and working with both victims and the accused to develop long-term solutions, and to “foster understanding”  and “impose fair punishment.” And as principals take charge of supervising school safety, the department may also need to reduce some administrative burdens now shouldered by school administrators.

In the aftermath of the Covid-19 pandemic, students who have spent months under lockdown have suffered increased depression and anxiety that can impede learning—the kind of trauma that most benefits from mediation by educators and counselors, and not police.

***
Andrea Gabor is Bloomberg Chair of Business Journalism at Baruch College/CUNY and author of After the Education Wars (The New Press, June 2018). On Twitter @aagabor.