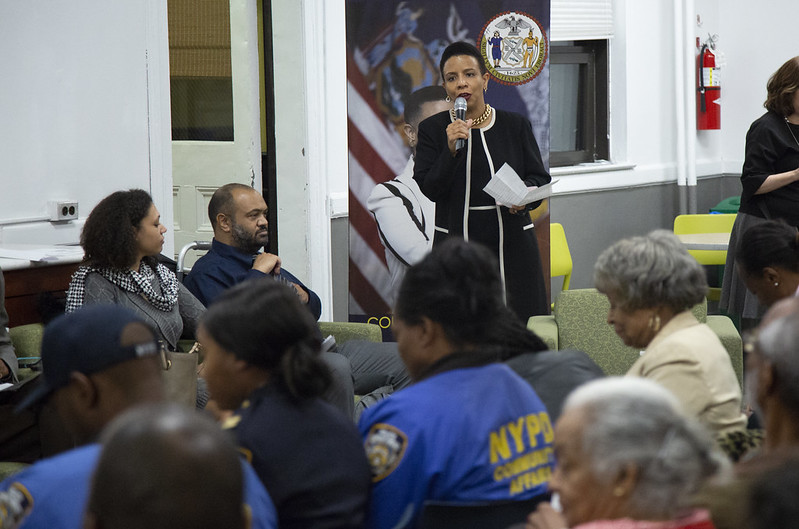 Defending her vote in support of a new city budget that did not cut NYPD funding by at least $1 billion (as New York City faces a $10 billion COVID-19-related revenue shortfall) Brooklyn City Council Member Laurie Cumbo told protesters criticizing the plan: "Work under the existing leadership of the communities that are already there."

Cumbo compared the development of the #DefundNYPD movement to "colonization" and said, "this movement is not being led by the Black community."

She and several other Council members of color made it sound like protests against state violence and inequality in city resource allocation had come out of nowhere from parts unknown. Did the few Black and Latino Council members who voted against the budget over lack of NYPD cuts blindly follow a movement of outsiders? Cumbo’s former chief of operations quickly rejected Cumbo’s narrative.

In a late-night tweetstorm Crystal Hudson listed 10 leading Black organizers, whose groups are among the over 170 organizations pushing to #DefundNYPD that Cumbo and other members have no doubt encountered during their time in the Council. The movement against state violence has been and is today led by marginalized peoples, Black women, Latino, Asian, immigrant, and LGBTQ.

Yes, there are many new people engaging in local politics, some are new residents in communities facing gentrification, and some of them eyeing elected seats in districts they recently moved to (an article for another day). But the vast majority of #DefundNYPD activists are simply people fighting to divest from policing and incarceration and to reinvest that money in those who most need it. And though Council members resent being the subjects of criticism and desperate pleas to do more, as the old saying goes, “It’s not about you.”

Many New York City Council members of color say that in their communities people aren't screaming for police defunding or abolition. One wonders, did they just close their windows each time a #BlackLivesMatter protest marched by their house? It is true that this year’s #BlackLivesMatter protests have engaged far more white people than they did when Eric Garner was killed, but in response to those protests the Council voted through a budget that added 1,300 new police officers. What Black or Latino Council member can honestly say their communities were screaming “Build new jails!“ when they approved billions to do just that in 2019? (None.)

Though to Cumbo’s point, when Council members of color and NYPD Commissioner Dermot Shea claim the community is asking for more police, there is truth there. The question is, which community are they referring to? Common community venues politicians and police leaders tell protesters to get involved in include local meetings of Community Boards and Precinct Community Councils. While community boards are not uniform -- multiple CBs passed resolutions in support of #DefundNYPD, including East Harlem's CB11 calling to #DefundNYPD by at least $1B in FY21 -- they’re generally more police-friendly organizations than the broader neighborhoods they are part of.

Community Boards are appointed by the local Borough President and City Council member. Local electeds don't often choose a bunch of people who think far differently than they do. There’s no public reason given as to why one is or is not chosen to a community board and many appointees have existing relationships with local electeds. Members are often removed from community board committees or not reappointed to CBs for rocking the political boat. As all-volunteer entities chosen by politicos where dissenting voices are not always welcome, community boards are not often viewed as a functional space where meaningful change can happen or be pursued. Because New York City has a dearth of local civics education, most don’t even know that it is the first rung of city government, a feeder for elected office (several sitting Council members, including the Speaker, are former community board chairs and more are former CB members).

If you’ve ever gone to a community board meeting in a Black or Latino neighborhood you might feel like you stepped into a world where #BlackLivesMatter never happened. There isn’t a lot of reimagining public safety outside of police. Fear of returning to the "bad old days" of the 1970s and ‘80s reigns.

A return to the “bad old days” is the ultimate political boogeyman in New York City politics. It can quickly undermine substantive policy arguments in almost any public safety conversation. Of course, crime and cops not responding, were just part of planned disinvestment of the past. Many community board members in communities of color are old enough to have lived the last crisis even close to the one New York City now faces. They are reminded of the crime and divestment as they walk by firehouses and schools that have remained closed since their childhood or those recently converted to luxury developments.

Community boards trend older and more conservative. Property owners are overly represented, renters and the homeless under-represented. Black and Latino CB members often live in neighborhoods that face more police violence and gun violence than their white counterparts. Local police are accessible to and regularly engage with many community boards. When calls to reform or cut police come, community board members often think of the last shooting or the working relationships they have with officers who report to the community board and work community events.

At Precinct Community Council meetings in Black and Latino neighborhoods, you won't find many people who have been abused by or lost family members to police, virtually no one actively calling for reinvestment of NYPD funds into social services, and few immigrants. Why? Precinct Community Council meetings are held with many cops and most often in police precincts. Most of the agenda is dominated by Black and brown people literally begging the police to “deal with” homelessness, “deal with” substance abuse, “deal with” guys hanging out on the corner, and “deal with” the seven major crimes (murder, burglary, assault, car theft, and so on).

One can be from and "do the work" in Black and Latino neighborhoods in New York City and not spend a minute in politician- or cop-dominated/funded spaces (some would call this self-care).

Tons of longtime residents who do mutual aid, community, and anti-violence work -- who fight health disparities, hunger, gentrification, racism, homelessness, and deportations -- avoid Community Board and Precinct Community Council meetings like the plague.

#DefundNYPD was coming from all over Black and Latino neighborhoods in New York City. From non-profits getting their budgets cut, individuals losing their jobs, people facing eviction when the moratorium ends, the hungry, the homeless, families of those killed by police violence, and others.

This new city budget was always going to be lose-lose chaos. City Council members got the ball after Trump and the Feds refused to reimburse cities and states for COVID-19-caused revenue deficits. Cuomo cut Medicaid and wouldn't allow New York City to borrow money to fill the tax revenue gaps. Trump, Cuomo, and de Blasio all refused to raise taxes on the wealthy. De Blasio offered a tale of two cities budget that slashed education and hospitals while protecting police and the wealthiest.

Disparaging #DefundNYPD and using budgetary tricks to act like the city got far closer to (or over) $1 billion in NYPD cuts didn't fool a single person paying attention. People can read budgets (though no public copy of the full Fiscal Year 2021 budget was available before the Council vote) and see through the funny math the mayor and Council presented. To pretend NYPD cuts are more than reality just handed talking points to the right wing, who will now claim, as Trump and Staten Island Council Member Joseph Borelli already have, that crime is rising because of $1 billion or more in NYPD ‘cuts.’

Expecting that the NYPD face a substantial budget cut like virtually every other city agency during a depression is not "abolition." A substantial cut to the NYPD’s almost $6 billion budget was not radical. It should have been inevitable. It's what happens when tax revenue dips $10 billion, and no one can say how much deeper it will drop, or when or what recovery looks like.

The difficulty in making NYPD cuts comes not only from strong police unions, their military and surveillance capabilities, but the deep faith in policing that is still shared across the political aisle. For all of the social services the NYPD is involved in; there are people in and out of city government who for many years have called for cops to get more involved with them. People still call cops to "deal with" fireworks, kids smoking weed, and loud music. On an individual and structural level, we call cops like genies in a bottle then wonder why we can't hold police accountable or their budget in check, why police “reform” never gets at the root.

Investing in jails and police while cutting education and public health has never made our communities safer. As Ruth Wilson Gilmore explained when talking with the New York Times last year, abolition of police is not the absence of "safety.” Abolition is not just closing prisons and dismantling the police; it is creating and maintaining vital systems of support many of our communities lack.

At a local level, New Yorkers have stepped up for each other through the most heartbreaking of challenges. But at federal, state, and municipal levels we have not addressed the root causes of any of our compounding pandemics or their impact on mental health (see New Orleans after Katrina [1] [2]). Crime will almost certainly continue to rise in the coming months, and that is because of the existing racial and socioeconomic inequality COVID-19 has only exacerbated -- pre-existing conditions many elected officials still see as “fake” or too "unrealistic" to prioritize.

If those calling for defunding and abolition cannot effectively address the reasons people feel the need to call the police and cannot offer alternatives to calling police viewed as viable by those most impacted by non-police violence, then people will keep calling the cops, long past the next election.

If politicos in New York City’s Black and Latino neighborhoods don't open themselves to conversations on "public safety" not dominated by them or police and continue to dismiss calls to divest and abolish as stuff only people on Twitter and new residents to their districts who don't "do the work” care about, then they are making the political miscalculation of their lives.

***
Andrew J. Padilla, an award-winning artist and educator born and raised in East Harlem, has lectured on urban politics across the country, from Hostos to Harvard, and is a proud member of Manhattan Community Board 11. On Twitter @apadillafilm6.