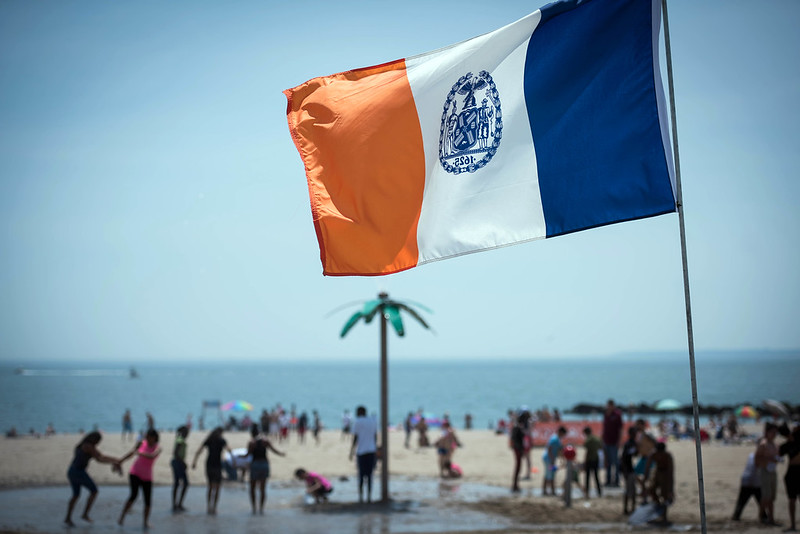 If you ask Amanda Sisk how she feels about the beach, her answer is straightforward: “I love the beach! Even Coney Island. The beach is my favorite place. Water, any kind of natural water, it makes me feel good!” But having lived in Washington Heights for nearly a decade, getting to the beach is no easy task. It normally takes Sisk close to an hour-and-a-half to get out to Rockaway Beach via the A train. She prefers Rockaway Beach because there are separate sections for swimmers and surfers.

This year, as the city continues to battle coronavirus, officials have had to drastically reevaluate our city's beaches. While swimming will soon be allowed at all city-run beaches, activities like sunbathing are limited to crowds of 50% normal activity. Additionally, all of the city's public pools, which have historically provided a much needed respite from the sweltering heat, are currently closed due to COVID-19, with only 15 pools due to open on August 1.

As we continue to grapple with this crisis, one thing seems abundantly clear: it’s time to build more beaches — including in Manhattan.

New York City currently maintains 14 miles of beaches, traditionally from Memorial Day weekend through Labor Day. In 2018, more than 16 million people flocked to the city's beaches, with Coney Island and Rockaway Beach seeing the most visitors. That's an awful lot of people crowding on subways and buses to get to only a handful of places where you can really enjoy the sun and surf.

Luckily, we can look to other cities, such as Paris, for inspiration. Every year, the Paris-Plages turns the Bassin de la Villette into a beach resort, complete with sand and deckchairs. For people in the mood for a swim there are three pools right along the water, which are fed directly by the canals. Similar projects are being proposed in cities like Boston, Montreal, London, and right here in New York.

Kara Meyer is the Managing Director of Friends of + POOL, which is working to create a floating pool that would allow New Yorkers to swim in filtered river water right here in Manhattan. “We had this realization that we live on an island, surrounded by water, and none of us can access it for swimming.” Meyer notes that since the pandemic, there has been a renewed interest in opening up more public spaces in our city to residents. “No one has appreciated public space in New York as much as they do right now. We have this amazing resource at our fingertips, all around us.”

Creating more public space for recreation and relief from the summer heat is one step we can take toward the much larger goal of eliminating inequality in our city. While New Yorkers with means can escape to places like the Hamptons for a weekend, or even the entire summer, most don't have that option.

As we face the climate crisis, rethinking our waterfronts would also allow us to incorporate resiliency into the equation, building natural storm barriers, and reducing the urban heat island effect. The Hudson River Park Trust recently released new plans for a new 5.5 acre park, including a resilient beachfront, along the Hudson River. The area would be open to kayaking and canoeing, but not swimming, according to reports. There are similar plans underway along the Williamsburg waterfront.

Building a new beach will be no small task, but there are positive signs. Late last year, the city posted a request for expressions of interest on a project to build a “swimming facility capable of filtering the waters of the East River to enable safe recreational access to clean water.” Developing a workable system for swimming in the East River could be the first step in realizing this vision and in determining a feasible location for a potential beach.

New York City has done big things before, and as we’ve seen, where there is political will, there is often a way. Now is the time to be bold, and to reimagine our city’s waterfront, for ourselves and future generations.

***
Kim Moscaritolo is a candidate for City Council in Manhattan's 5th District. On Twitter @kimmosc.