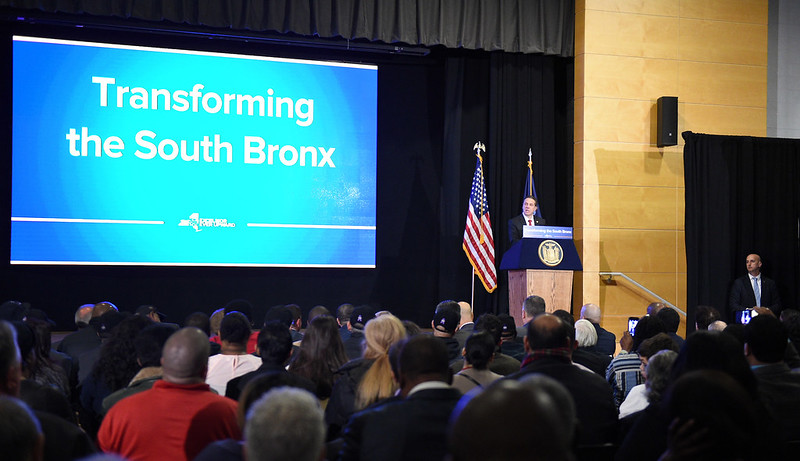 Our country’s history has been fraught with issues that have disadvantaged communities of color, including unequal housing, education, health, food access, economic opportunity, and the chronic stresses of living with racial bias. Intertwined with these are a myriad of severe environmental justice issues.

Communities of color suffer disproportionately from air pollution from nearby waste facilities, industrial plants, and high bus and truck traffic on their thoroughfares.“Diesel trucks and diesel buses play a significant role in impacting the health of our communities negatively,” said Cecil Corbin-Mark of WE ACT for Environmental Justice. “For us, this is one of the ways in which environmental racism manifests itself.”

In New York, one of the hardest-hit communities is the Hunts Point section of the South Bronx.15,000 trucks a day transport products and service the Hunts Point food market, which sells food to the whole city. "Yet Hunts Point itself is a food desert,” New York State Senator Alessandra Biaggi points out. “Residents often do not have access to the fresh produce being distributed right in their neighborhood.”

We know how to do that, and we should do it now. New high-performance natural gas-powered engines for medium- and heavy-duty trucks virtually eliminate the health-damaging pollutants in diesel exhaust and are widely available. They’re also much quieter than diesel engines, enabling residents to sleep better at night.

These engines can run on conventional compressed natural gas or, better yet, on renewable natural gas (RNG), made from the methane biogases emitted by decomposing food and other organic wastes. Instead of letting them escape into the air, where they trap heat and warm the climate, the biogases are captured and refined into RNG. According to the California Air Resources Board and Argonne National Labs, RNG is the lowest-carbon fuel available today.  When made from organic wastes diverted from landfills, RNG also reduces the negative impacts on communities near those landfills.

Trucks equipped with these engines cost about $40,000 more than their diesel counterparts.  But a new “Clean Trucks” program initiated by the New York City Department of Transportation is covering the incremental costs of gas/RNG-powered and electric trucks, so private and municipal truck fleets in New York can afford to switch from diesel to clean trucks. They will have no trouble procuring RNG to run them. Last year Clean Energy Fuels, the largest U.S. supplier of natural gas, opened a refueling station in Hunts Point that sells RNG exclusively. It also announced last year that by 2025 it will phase out fossil gas and supply customers with RNG only. Since RNG is ultra-low carbon, fleets that adopt it will meet or even exceed New York and Paris Accord emissions targets, not by 2050, but overnight.

Clean trucks won’t solve all environmental justice problems. But for the South Bronx and other communities disproportionately impacted by diesel haulers, they’re an important step toward justice. The trucks, fuel, and financing are all available and ready to go. What’s needed now is the political will to use them. That’s a matter of principle, a question of what kind of country we want to live in.

We have a lot of work to do to build a society where justice for all extends to communities of color. Part of that work is eliminating discriminatory exposure to pollutants, and making sure environmental justice communities are first in line to get the benefits of technologies like clean trucks and RNG.

***
Joanna Underwood is founder and trustee of the NGO Energy Vision. On Twitter @energy_vision.