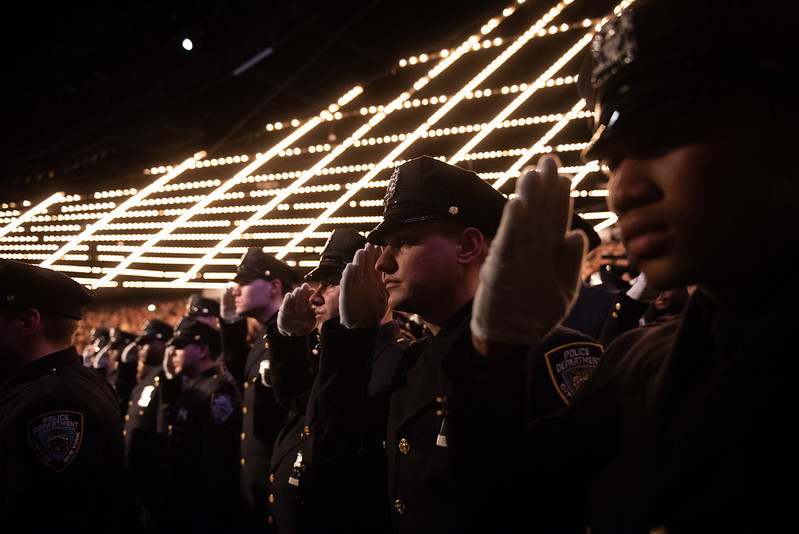 America is being confronted with a truth that Black communities have always known—cops lie. They tell big lies that send people to jail for life. They tell small, yet still extremely dangerous lies like the completely fabricated Shake Shack poisoning. Cops especially tell insidious lies to cover up acts of racial terror, as we witnessed with recent lynchings that were officially labeled suicide by the police. These lies are part of a broader system, culture, and practice of police violence, and just one more reason why we must defund the police.

Perhaps most disturbing of all is when these lies are used to absolve the police of murder. Elijah McClain, who died in Colorado police custody last year, had done nothing illegal prior to his arrest. Cops claim McClain was resisting arrest and reached for one of their guns, even though recorded evidence directly disputes that lie. The Louisville cops who killed Breonna Taylor told many inconsistent stories about the night they barged into her home and shot her eight times.

The ever-increasing count of murders by lying police still only constitute a fraction of the lies cops tell. Cops lie to justify violating constitutional protections and due process rights of Black and brown communities, and they do this with impunity. Ask any public defender and they will corroborate that cops lie. In fact, ask any police officer and they will also corroborate that cops lie, as they did with the New York Times—what cops have admittedly called testilying.

Similarly, New York City prosecutors often enable the practice of cops lying in order to convict people, regardless of innocence. In all five boroughs, prosecutors are maintaining internal databases of cops with credibility problems in court. These secret databases must be made public for transparency and accountability. At the same time, these secret databases only scratch the surface of the problem. A Gothamist/WNYC investigation in partnership with The Appeal found that New York City prosecutors consistently fail to document and disclose police dishonesty.

Most notably in popular culture, Ava DuVernay’s masterful television miniseries “When They See Us” illuminates the lies, corruption, and self-delusion of police and prosecutors alike. Yet, cops have occupied the moral and credibility highground for far too long, meanwhile Black and brown communities have been pathologized and vilified.

As public defenders, we bear witness to the lies cops tell to justify racist policing. Public defenders all across the United States have taken to social media in solidarity with the Black Lives Matter movement and calls to defund the police. Using the hashtag #CopsLie, The Black Attorneys of Legal Aid organized this digital campaign to show that the systemic racism and abuse within policing in America are not individual incidents and cannot be excused as aberration.

Nonchalant lying with impunity is ingrained in American police culture. We've seen police plant evidence, falsify documents, and lie while testifying under oath. They even blatantly lie in the face of contradictory video evidence. These lies are so prevalent that even journalists are reexamining their reliance on the police as sources.

Public defenders have inundated social media with firsthand accounts of police lying. Finda Yawah, a public defender in New York City, recounts when a “cop claimed my client tried to hit him on top of the head with a 40 ounce bottle. It was physically impossible due to my client’s severe medical issues and injuries to his spine before the incident.” Fortunately, the jury saw through the cop’s lies and found her client not guilty.

Public defenders routinely see the false reasons police give to arrest and detain by asserting, "He fit the description." Destiny Singh, a Black attorney and former public defender in Palm Beach, describes her personal experience with these racist lies in court. A cop, who claimed to witness her client committing a crime, is asked to identify her client. The cop “points to me. Then continues to describe what I’m wearing,” writes Singh. Singh’s client was later acquitted.

Police lies are entangled in police violence. Cops commonly lie to excuse their use of excessive force. Olayemi Olurin, a public defender from The Legal Aid Society’s Queens office, shared multiple stories. One of these stories involved a “teenage boy who officers lied + said threw a Capri sun on the ground,” so “they tased and beat him so many times he peed himself, was bleeding, had cuts running down his legs and couldn’t walk.” What would have kept this Black boy safe is to reduce contact between police and communities. Prison abolitionists like Mariame Kaba have explained: “The surest way of reducing police violence is to reduce the power of the police, by cutting budgets and the number of officers.”

Racist and aggressive policing, coupled with after the fact lies, have serious collateral consequences on Black and brown communities, from unemployment to immigration detention. Olurin represented another “young man who police arrested and charged with criminal trespass as he was entering his own home. The address he was accused of trespassing at was his home address listed on his ID and the paperwork provided by the officers themselves.” Yet, “the prosecution still refused to dismiss the charges for a couple of months and my client could not get employed because of the open criminal case.”

Law enforcement lies even shape public policy, like when New York rolled back bail reform earlier this year under the guise of public safety. Cops are using fear to fight reform. “The reality is the NYPD goes to great lengths crafting causation where there is none, misleading the public, and, yes, even lying to maintain the unmitigated, militaristic power they enjoy in the city,” said Marie Ndiaye, a supervising attorney in the Decarceration Project at The Legal Aid Society.

According to journalist Ross Barkan, the spectre of murders in NYC needs context. “There have been 176 people killed. At this point last year, 143 were killed. This is a spike, not an apocalypse.” In fact, back when Michael Bloomberg was mayor in 2012, “419 people were killed. We are in the midst of a once in a century pandemic,” and “NYC is NOT on pace for that.”

In an era of alternative facts, the amplification of #CopsLie stories reveal truth and give visceral meaning as to why we must defund the police. To defund the police is to reduce police contact with vulnerable communities, because policing is a part of the problem of violence in our society. As we begin to reframe what public safety means and the role of policing, we must also understand that defunding the police seeks to reallocate and redistribute resources from policing to institutions and services that promote healthy communities--like education, healthcare, and housing.

NYC is allegedly cutting $1 billion from its usual exorbitant police budget of nearly $6 billion, but activists have criticized Mayor Bill de Blasio and NYC City Council for shuffling funds to pay the NYPD through other agencies, like the Department of Education. However, problems with the criminal legal system is not a policing problem alone, other actors in the criminal justice system require significant changes as well. In addition to defunding the police, there are concrete steps that can be taken by prosecutors and judges in the meantime.

We need prosecutors to confront their own complicity in bolstering police lies, and proactively expose police abuse. Judges can also refuse to rubberstamp police testimony, throw out cases where police are caught in lies, and even sanction the cops who lie. If police knew that their lies would not only be called out by public defenders but also prevented by prosecutors and sanctioned by judges, we would see a drastic decrease in lying cops and the destruction their lies cause.

***
Rigodis Appling is a public defender and a member of the Black Attorneys of Legal Aid caucus at the Legal Aid Society. Jason Wu is a legal services attorney in New York City, and a trustee for the Association of Legal Aid Attorneys, UAW 2325. On Twitter @rigodis & @CriticalRace.