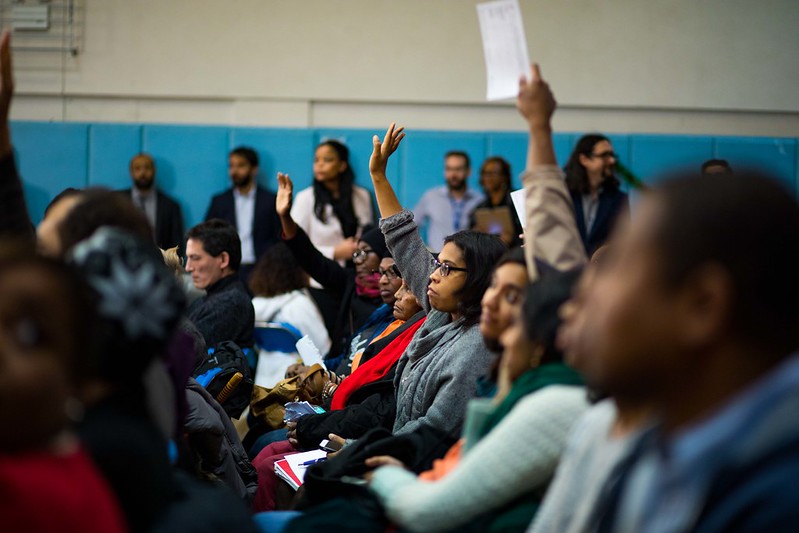 On May 25 in White Plains, U.S. District Court Judge Cathy Seibel ruled that the at-large system used for electing the nine members of the East Ramapo School Board denied the district’s Black and Latino voters effective choice in its elections, violating §2 of the Federal Voting Rights Act (VRA). Under an at-large system every voter votes to fill each board position, allowing a disciplined majority to control all seats. A majority of the East Ramapo district’s voting population is Hasidic Jews. The School Board has long been dominated by members recruited and endorsed by the leaders of this religious community and elected at-large through the use of block voting.

Children of Hasidic families in the district all attend private religious schools (Yeshivas) to which the board regularly diverts resources. Meanwhile the board’s tax cutting and repeated austerity budgets have starved the district’s public schools, where most of the students are members of minority groups. To redress this bias, Judge Seibel barred further at-large elections for the nine-member school board and ordered the immediate development of a ward-based plan for conducting future school elections. Under a ward system, board members are elected from geographically defined districts, permitting the election of members supported locally but not favored by the jurisdiction-wide majority.

1. For the first time since the passage of the Voting Rights Act over a half-century ago, it has been used to require structuring choice in New York’s school board elections in a way known to be more responsive to minority communities. East Ramapo will become only the second of New York State’s 688 school districts to have ward-based elections. (The other is the City of Buffalo.)

2. Voting Rights Act litigation has previously been used to halt the use of at-large elections in New York municipalities, but until now the necessary evidence could not be marshalled to successfully challenge the practice in school districts. Judge Seibel relied heavily on expert political science testimony employing the statistical techniques of Ecological Inference and Bayesian Improved Surname Geocoding (BISG).

She wrote: “This may be the first time that voter-preference estimates based on BISG have been admitted into evidence at a VRA trial.” If sustained on appeal, this decision will provide the basis for change elsewhere, facilitating elections of members preferred by minority-community voters.

At-Large and Ward-Based Elections
New York law provides that all village, town, and school board elections be conducted at-large. As an alternative, towns and villages may adopt the use of wards by referendum. However, school districts may not.

The early 20th century progressive reformers who designed New York’s school governance system sought to “separate education from politics.” For them ward-based urban political machines were anathema. They wanted governance in the hands of “better men.” At-large elections were their primary tool for achieving this end.

These reformers were not shy about their unabashedly social and racial bias, as illustrated in the map and accompanying text below, taken from a 1916 book written by Dean and Professor Elwood Cubberly, cited by the New York State School Board Association as a framer of the New York system. Their preferred at-large system was discriminatory not only in its effect, but in its intent. 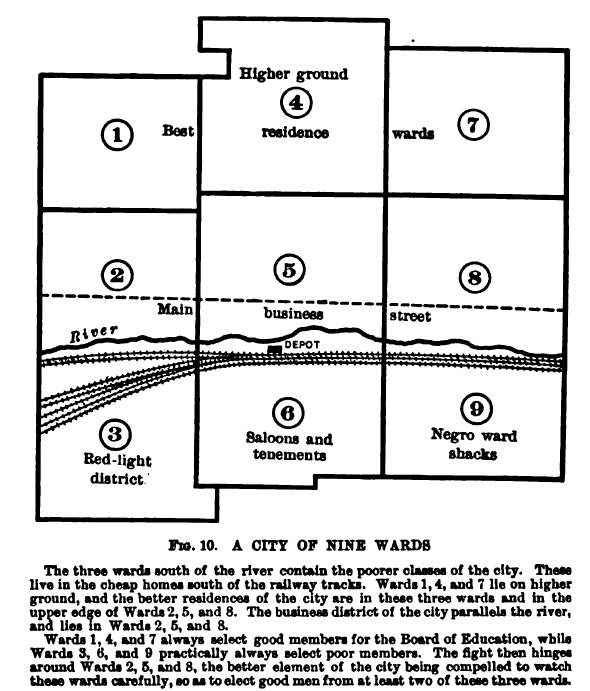 Evidence and Statistics
The discriminatory effect of at-large election was well-known by the time the Voting Rights Act was passed in 1965. The challenge was to prove it denied protected minorities effective choice in elections in specific cases to the satisfaction of federal judges. The courts required that members of these minorities seeking redress under the VRA show that the manner in which their jurisdiction’s election was structured systematically precluded them from having any impact on outcomes.

Voting is confidential. So is Census information. We do not keep individual level records about a person’s voting behavior or residence by race. Until now, therefore, proof of the invidious effect on minorities of the manner in which electoral choice is structured was built from a combination of place-specific voting records from their neighborhoods – aggregate election outcomes from Census blocks made up largely of minority group residents.

But in New York State, school board elections, unlike those for municipalities, are not conducted in geographically specified election districts. Aggregate place-specific records of voting by members of minority groups are therefore not available to combine with Census information to provide the needed proof of structural bias. Though VRA litigation has been successful in challenging the discriminatory effect of at-large elections for municipal elections in the state, conducted in geographically defined election districts, the impossibility of gathering needed evidence has heretofore blocked mounting similar litigation challenging the at-large structure of school board elections.

To overcome this barrier, lawyers for the NAACP brought in political scientists expert in Ecological Inference and BISG. Ecological Inference, pioneered by Gary King, a graduate of SUNY New Paltz and now a professor at Harvard, permits inferring individual behavior from group-level data. BISG combines individual level information about persons’ names with the place where they live to predict their race and/or ethnicity with high probability.

Much of Judge Seibel’s compelling 77-page opinion is devoted to a careful assessment of political scientists’ expert testimony and an explanation of why she finds it compelling in proving that the at-large system used in East Ramapo is in violation of the Voting Rights Act. As the case goes forward on appeal, however, it is cautionary to recall that the judge is functioning in a system headed by U.S. Supreme Court Chief Justice John Roberts, who in a redistricting case called political science expert testimony “sociological gobbledygook.”

Turnabout
Though they have long had the choice, only 14 of 932 New York State towns and 4 of 534 villages have opted for ward-based elections. But lately there has been a quickening of interest in this option in the Hudson Valley. The town of Blooming Grove switched over in 2016. Other municipalities have the matter under consideration. Special legislation has been introduced in Albany allowing the adoption of ward systems for the Chester Union Free School District, and the Washingtonville and Warwick Valley Central School Districts. General legislation has been entered by Hudson Valley state legislators to allow local choice of ward systems in Orange County and statewide. Ironically, in these jurisdictions, and increasingly in the wider region, the motivation seems not to assure effective choice by minority-group voters, but the protection of the control of schools by current majorities from a minority community growing rapidly in numbers and power – the Hasidic community – not protected under the Voting Rights Act.