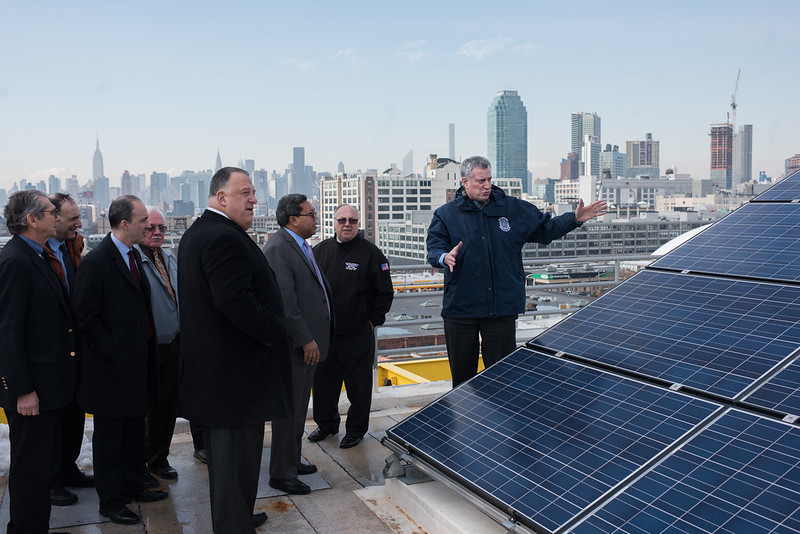 In March, I found myself with a 104-degree fever on my 18th birthday. My dad wasn’t faring any better, requiring a hospital visit and remaining sick for 12 days. After testing positive for COVID-19, we knew to stay isolated for 14 days once symptoms subsided, which was when my dad decided to get back to work. However, the economy decided against it.

He and his IBEW Local 3 brothers and sisters, along with thousands of other building and construction trade union members, saw job sites grind to a halt. From bodegas to banks, much of the business capital of the world quickly shuttered.

As a young person, I’m forced to reckon with a number of urgent crises: the destruction wrought by the COVID-19 outbreak, an economic recession, systemic racism, and climate change. We need a solution for New York City that addresses all four urgently.

As a New Yorker, 2020 hasn’t been easy – every day seems to bring more bad news. From March to August, we watched as tens of thousands of our neighbors died at the hands of COVID-19, the economy plummeted, and the city erupted in protests against racism. We’re still in the thick of crises. Nationwide COVID cases are on the rise, local unemployment is at more than 20%, and we’re inching towards the ‘point of no return’ for global warming. And yet, somehow, New Yorkers are expected to pay the rent.

While New Yorkers are suffering, it’s important to note where the current political climate intersects with the economy. The demands of the Black Lives Matter movement don’t end with police reform, but total economic and social parity for Black Americans. The statistics are startling: BIPOC unemployment is 2-5% higher than white unemployment while Black workers make under 60 cents on the white workers’ dollar. Now emerging from the pandemic, our most vulnerable neighbors cannot afford to return to ‘normal.’

New York City needs a local stimulus to get us through the pandemic while positioning the economy to be more robust and equitable, helping workers like my dad.

For years, the Climate Works for All coalition, a collection of local labor, environmental, and social justice groups, has been fighting for a ‘just transition’ to a sustainable climate and a fair economy. Since the COVID-19 crisis began, the coalition has developed the Climate and Community Stimulus Platform, a climate jobs recovery plan that outlines citywide infrastructure projects, putting 100,000 New Yorkers back to work and moving us towards our climate goals.

The platform continues green work already in progress throughout the city while also building new industries and making older sectors energy efficient. To expand upon Local Law 97, which requires a reduction in building carbon usage across the city up to 80% by 2050, the plan proposes funding for low-income and NYCHA housing retrofits. Small, midsize multi-family, and larger public housing units will all require some level of city funding to effectively meet Local Law 97 guidelines, and there’s no time like the present to begin this work. Using federal, state, NYSERDA, and local funding streams, we can raise the capital needed to hire thousands of workers as our city hits peak unemployment, building green infrastructure that will pay dividends for all New Yorkers for years to come. With local hiring promises and project labor agreements (PLAs), workers will be afforded safe and dignified jobs in their communities.

The Climate and Community Stimulus Platform also promotes bringing old sectors, such as transportation and manufacturing, into the 21st century green economy. Increased funding to electronic vehicle charging stations and MTA improvements would allow our city’s transportation infrastructure to meet the demands of its population. Funding for port development and electrification will help reinvigorate New York City’s manufacturing industry and promote local blue-collar job creation. It will bring the New York harbor to the forefront of the offshore wind industry, creating hundreds of new manufacturing and staging jobs.

Workforce development programs would support these projects by training workers for a green economy and the new jobs that come with it. Investments would also prioritize underserved minority communities, who have been disproportionately impacted by the COVID-19 crisis and resulting economic recession.

The proposal has had buy-in from all aspects of the policy field, from unions like IBEW Local 3 and IUPAT District Council 9 to environmental organizations such as the Sierra Club and New York Renews, and community groups like Make the Road New York and UPROSE. We’ve also included the voices of future generations of New Yorkers by working with TREEage, a youth climate justice organization that has been involved with the youth climate movement and Climate Strike NYC.

It is time for immediate action before these overlapping crises worsen, and the New York City Climate and Community Stimulus Platform is the tool we need to protect New Yorkers before a second wave.

***
Scott Siegel is co-policy director at TREEage, a youth climate organization based in New York City. On Twitter @scottsiegelny.