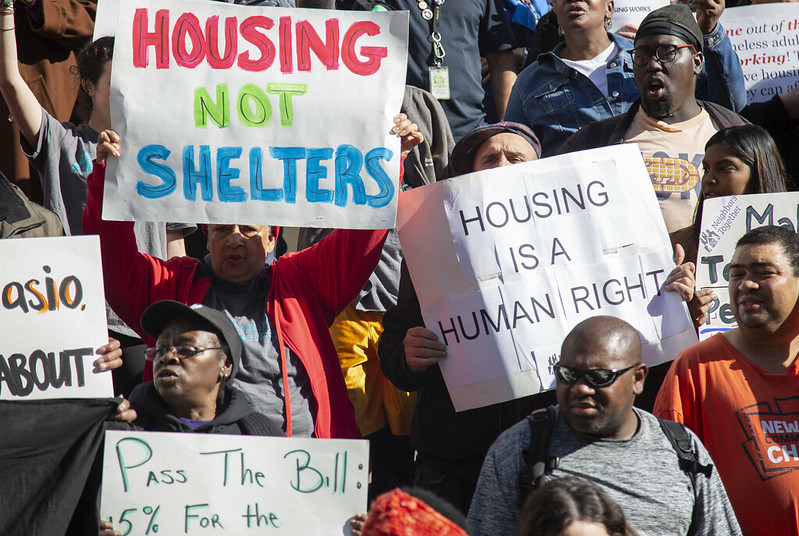 I spent a good portion of my childhood and adolescence around the intersection of West 79th and Amsterdam, whether it was with my parents or friends’ parents at Bagels & Co., or picking up snacks at the Duane Reade or Insomnia, or covertly eating non-kosher at Island Burgers. So it has been deeply saddening for me to see such a cornerstone of my neighborhood be turned into a rallying cry for reactionary hatred. The temporary sheltering of a few hundred homeless people in the Lucerne, the Belleclaire, and the Belnord is the least that the Upper West Side, one of the wealthiest neighborhoods in the Western Hemisphere, can do. Especially when the alternative is overcrowded, understaffed city shelters where COVID-19 could spread easily.

That’s the reality that seems to be lost on groups like Upper West Siders for Safer Streets, a Facebook page whose members have called for, among other things, smearing excrement on city benches to keep away homeless people and using fireworks to clear out homeless encampments: that we are living in extraordinary times. Just this weekend, America passed 5 million covid cases and 150,000 covid deaths. If otherwise-empty hotels can be used to help reduce covid vulnerability of existing shelters, then it should be done. With shelters recording a 60% higher rate of infection over the city, as Pablo Zevallos wrote last week, “social distancing...is a life-or-death matter for the homeless.”

Admittedly, plenty of my neighbors do understand this. They instead argue that they are being forced by the city to sacrifice their community for the sake of health. And to these people I have to ask: what sacrifice? According to NYPD data, crime on the Upper West Side is either flat or down year-over-year across all categories. By any metric, the Upper West Side remains the safest neighborhood in Manhattan. Just this weekend I passed by two Guardian Angels on the corner of my block, a block on which I have never, in my entire life, been witness to a crime. Contrary to the apparent beliefs of many members of the Safer Streets Facebook group, not every person of color you don’t recognize is homeless, nor are they committing a crime.

There is a growing sentiment among my neighbors, though, that being homeless is in-and-of-itself a crime. Whether people realize it or not, this is the sentiment behind worrying about, for example, public urination (real quick, give me the location of a 24-hour public restroom on the Upper West Side). My point here is not that public urination is a desirable outcome - of course it isn’t. It is, however, the natural consequence of having a very large population of homeless people and few public restrooms. Bear in mind, too, that New York is the only city in the country with a right-to-shelter law, which stipulates exactly what the name suggests: the city is required by law to house everyone. COVID-19 aside, there have never been enough shelters to fulfill this requirement, so the city has turned to hotels. Again - housing homeless people in hotels is not a desirable outcome, but it is the natural consequence of not having built enough housing.

And this is an area where our neighborhood has clearly failed. I’ve always found it funny that Mayor de Blasio is blamed for everything bad that happens on the Upper West Side when his housing policy has left our neighborhood virtually untouched. Since 2014, the city has constructed just one affordable building north of 62nd Street. This is not because of the high cost of housing on the Upper West Side. Aaron Carr, founder of the Housing Rights Initiative, pointed out that the city’s own report on affordable housing found that expensive markets are actually better for affordable housing construction. This way, private developers can more easily defray the cost of affordable units with more expensive, market-rate units. So why, then, has the city built so much affordable housing in lower-income neighborhoods like East Harlem and Bedford-Stuyvesant and nothing in higher-income neighborhoods like the Upper West Side? The Lucerne is the answer. As Carr put it: “The backlash against the hotels is part of a broader pattern of exclusion.” Upper West Siders do not want new housing, so no new housing has been built.

But there is no other way to resolve this crisis. Shelter is, quite literally, the most basic human need, and there is no other way to help homeless New Yorkers get their lives back on track. It is high time that neighborhoods like the Upper West Side, wealthy even by the standards of the richest city in America, contribute to ending our housing crisis. That’s why I’m an active member of Open New York, a group fighting to bring more housing to wealthy neighborhoods so that more people can afford to live in New York City.

We’re currently working to upzone SoHo, but the same arguments apply equally well to the Upper West Side. More housing in the wealthiest neighborhoods will create more funding for affordable housing, increase integration, and take displacement pressures off vulnerable, less-privileged areas of the city. We live in a neighborhood that millions of Americans can only dream of: good schools, safe streets, and beautiful parks, right in the heart of the economic engine of the world. Instead of building walls around what we are fortunate enough to have, we should open our doors and give others the chance to share in it.

***
Jonathan Lindenbaum is a lifelong Upper West Side resident and member of Open New York. On Twitter @urbaneurban.