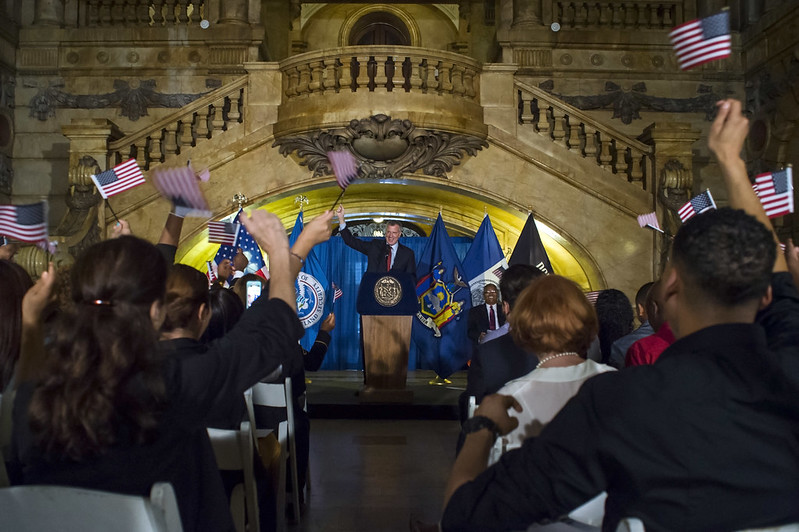 This is not the time to cancel the NYC Urban Fellows Program, as the de Blasio administration appears on the verge of doing. It is a time to inspire young people to work in government. We need more opportunities for young people to work in government, not fewer. It is misguided and short-sighted to cut a program that managed to survive the 1975 fiscal crisis, and every New York City budget crisis that has followed.

The New York City Urban Fellowship is a very popular public service program that has stood the test of time – surviving and only getting stronger over 50-plus years and through seven mayoral administrations dating back to Mayor John Lindsay. It also helped give rise to the current mayor, and he shouldn’t forget that.

Much like President John F. Kennedy, Mayor Lindsay had a real knack for recruiting the best and the brightest young staff. They came to government with their passion for civic engagement, as well as energy and ambition, and they found opportunity, exhilarating hard work, and focus that many have said lasted throughout their careers.

The New York City Urban Fellows Program was one of the successful tools that was created at City Hall during the Lindsay years to channel the energy and enthusiasm “to do good” that many college graduates were expressing. The idea of the program was pretty straightforward: create a highly competitive, nine-month fellowship to introduce promising college graduates to public service. Fellows were given a wide array of choices. They could work in the Mayor’s Office or one of the many city agencies or neighborhood offices to gain hands on experience in serving New Yorkers in need of assistance. The fellowship also includes a weekly seminar where participants gather and learn about New York City government from various guest speakers including city commissioners.

As a senior at Fordham University in 1981, interested in public service but hesitant about taking the law school route, I stumbled across a flyer on a bulletin board in the Political Science Department that introduced me to the New York City Urban Fellows Program.

I was selected and went into the program with my eyes wide open, wanting to make a difference in the city where I was born, raised, and educated. It was a challenging and at times a frustrating experience. Along the way, I met lifelong friends and was inspired by mentors, many who have dedicated careers to making our city a better place.

Two years after my fellowship year, I was tapped to lead the Program.  At the time, the Koch Administration was still wrestling with the 1975 fiscal crisis. To continue the program, I worked with Deputy Mayor Ronay Menschel to secure funding support from various foundations and corporations. NYU Wagner School of Public Administration chipped in by organizing a weekly seminar series.

For two years with the help of many alumni, we figured out a way to keep this fellowship afloat and scraped together outside funding. When the economy bounced back and with a balanced budget, Mayor Koch understood that the fellowship exemplified a great tradition of support for public service and restored city funding in 1985. Through the ups and downs over the years, the Urban Fellows Program has flourished. Mayor Bloomberg celebrated its 40th Anniversary with a festive event at Gracie Mansion with a strong core of the now more than 1,000 alumni that have had the opportunity to serve our city.

Unfortunately, the incoming class was recently told that the program will be suspended this Fall because of city budget shortfalls. It is supposed to start next week.

I understand that the fiscal picture is very bleak and requires deep and painful cuts. But it is my hope -- and the hope of a group of promising young public servants -- that Mayor Bill de Blasio quickly sees this decision as wrongheaded. This is a modest program with a big impact in recruiting and cultivating public servants as leaders. It has been instrumental in inspiring many public service careers including Mayor de Blasio, who was an Urban Fellow 36 years ago.

Especially now when our country is so divided, we need to make every effort on all levels of government to make public service appealing and improve civic engagement. Programs like the NYC Urban Fellows, inspire and bring young people from all backgrounds together. This year’s graduating class included students from Baruch, Brooklyn, Hunter, and City Colleges. There’s very good reason this program has been successful for over a half century – it works and has now been replicated in cities across the country. Let us continue and build upon this success.

***
Rob Walsh was the New York City Small Business Services Commissioner from 2002-2013 during the Bloomberg Administration. He now serves as a Senior Advisor to the Manhattan College President and is an Adjunct Professor at Columbia University School of International & Public Affairs. His segment the Bottom Line for Small Business can be heard weekly on 1010 WINS Radio.