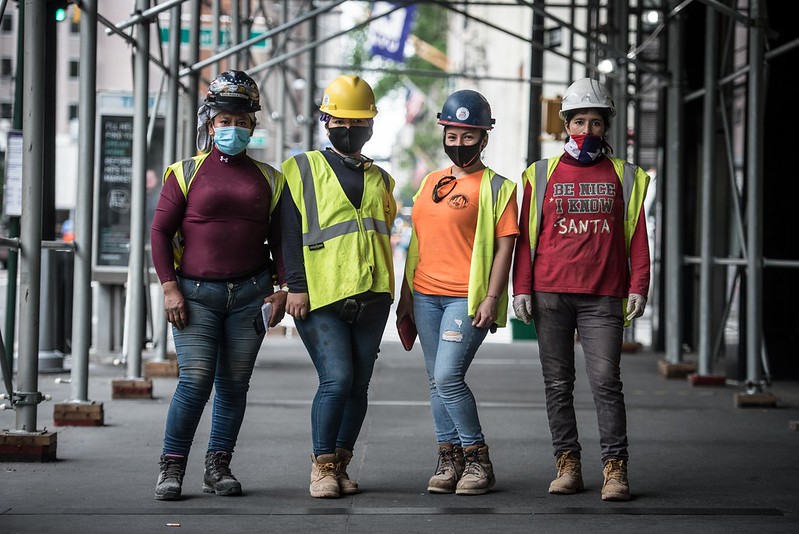 Among the many conversations I’ve had about the upcoming election, one stands out in my mind.  It was with an old friend who is riding out the pandemic in upstate New York. She told me about an acquaintance of hers there, a white male construction worker, who is a steadfast Trump supporter. She could not understand why, given that he is struggling economically, he finds the ‘MAGA’ narrative so appealing. “What he is really angry about is all those Mexicans and Guatemalans around here who are taking jobs away from people like him,” she reported.

There’s no danger that New York State will land in the Trump column in November, and lately immigration has faded from the headlines, displaced by the Black Lives Matter protests and Trump’s demonizing of “rioters” and “looters” in the streets. This time around “law and order” is the focus of Trump’s presidential campaign. But we should not lose sight of the immigrant scapegoating that was his North Star in 2016. It remains a potent force for a sizable chunk of Trump’s base, especially white working-class Americans like that construction worker.

This Labor Day brings another reminder of the reversal of fortune that the nation’s white working class has endured over recent decades, as de-unionization and labor market restructuring drove economic inequality to sky-high levels not seen for over a century. Employment insecurity and precarity, already widespread before 2019, have been deepened by the COVID-19 pandemic. Trump and his allies continue to trumpet the immigrant threat narrative, blaming immigrants for “taking American jobs” and for the collapse in living standards that so many U.S.-born white workers have experienced. But this narrative – like so many others promoted by the president – has no grounding in reality.

As I document in detail in a new book, the immigrant threat narrative confuses cause with consequence. In industry after industry – including construction – the degradation of wages and working conditions preceded the influx of immigrants.

Starting in the 1970s, employers moved to undercut or eliminate unions, and turned formerly well-paid jobs with health and pension benefits into low-wage jobs with few appealing features. In the same period, business-promoted deregulation and skyrocketing subcontracting further contributed to the mushrooming of low-wage, precarious work. In response, U.S.-born workers increasingly abandoned or rejected newly degraded jobs, if they had the option. Only then did employers recruit immigrant workers to fill the resulting vacancies. In short, it was labor degradation that led to low-wage immigrant employment, not the other way around.

Pitting immigrants against their U.S.-born co-workers is just one of many examples of Trump’s divisive rhetoric. Both groups have suffered from employers’ intransigent anti-unionism and from neoliberal policies driving labor degradation, and both groups would benefit from working together to challenge those policies. One arena in which they can do so is the labor movement.

U.S. unionism is at a historic ebb in numbers and power, but immigrants – especially those who arrived in the U.S. many years ago – have a unionization rate only slightly lower than that of U.S.-born workers. In New York, one of the few regions of the U.S. where organized labor remains relatively strong, with union density roughly double the national average, foreign-born workers actually have a slightly higher unionization rate (21%) than their U.S.-born counterparts (20%), as Stephanie Luce and I document in a new report analyzing 2019-20 data.

It turns out that immigrants, the vast majority of whom came to this country in search of economic opportunity, are disproportionately eager to become union members if the opportunity arises. Although recent immigrants – especially the undocumented – often face obstacles in gaining access to unionized jobs, though that changes once they get their bearings in the labor market, and changes even more if they become U.S. citizens. The unionization rate for New York City immigrants who are naturalized citizens is a whopping 28%. In the nation as a whole the rate is 12%, slightly higher than the 11% unionization rate for U.S.-born workers nationwide.

In recent months, the city has hailed its “essential workers” – another disproportionately foreign-born group. The loud recognition of their work at 7 p.m. in the evening no longer marks the end of each day, but on Labor Day, let’s once again remember their role in keeping so many New Yorkers alive, and also challenge the immigrant threat narrative promoted by Trump and his allies. White working-class Americans have every reason to be enraged about their declining living standards, but the target of their anger should be employers and the neoliberal public policies they promote, not immigrants.

***
Ruth Milkman is Distinguished Professor of Sociology at the CUNY School of Labor and Urban Studies and the CUNY Graduate Center, and the author of Immigrant Labor and the New Precariat.