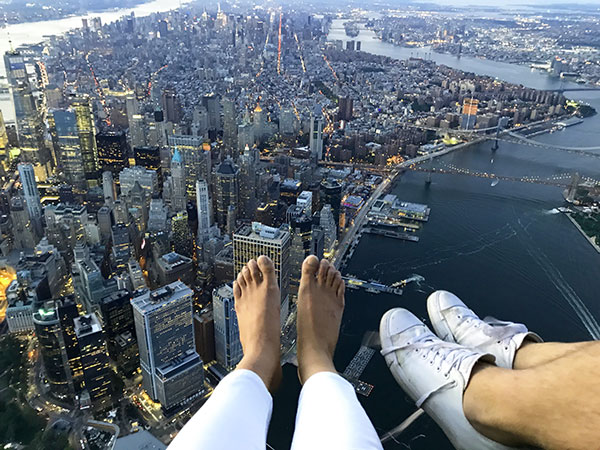 For New Yorkers living below the flight paths of what helicopter companies consider to be photogenic or interesting neighborhoods, Labor Day weekend was sheer hell. And, ironically, very few of those noisy, polluting, low-flying helicopters flew from New York-based heliports.

Our New York City skies are being colonized by New Jersey. When I was writing a story on helicopters in 2012, helicopter pilot and then-Mayor Mike Bloomberg scoffed at the popular reform proposal to ban heli-tours from New York City-owned heliports. The flights will just move to New Jersey, he said. Indeed they have.

The incessant low-flying air traffic tormenting parks and neighborhoods is nearly all coming from outside New York’s boundaries. Helicopter companies headquartered across the Hudson and suburban locations in Connecticut—but mainly New Jersey—have taken full advantage of Governor Andrew Cuomo’s covid policies that prevented New York-based heli-tours from reopening until late August — and then under restrictions, with the Downtown Heliport only open to tours on Fridays and Saturdays.

But New Jersey Governor Phil Murphy had no such scruples.

And not just any New Jersey helicopter company is flying above us—but FlyNYON, the sightseeing company whose doors-off tour crashed into the East River in March 2018, killing five passengers. There are other heli companies to be sure, but FlyNYON is famous for evading federal safety regulations by classifying its doors-off tours as photographic in purpose rather than for tourists. In today’s world dominated by social media, photography doesn’t mean a few pros, it means lots of tourists taking selfies to post on Instagram and other sites. The flights are fun, says Untapped New York, combining “photography, adventure, and one of the best ways to see New York City on its doors-off helicopter tours.”

To many New Yorkers below, however, FlyNYON helicopters sound worryingly dangerous. They’re all old—they average 30 years—and loud. They rattle ominously as pilots maintain them at slow speeds hovering over residential neighborhoods and Central Park, then flying down the East River before heading back over Manhattan, especially Chelsea and Ground Zero, right before they hit the tourist trifecta of the Brooklyn waterfront, Brooklyn Heights, and Governors Island. There are also popular spots for hovering in Queens, such as the Noguchi Museum and Gantry Plaza State Park. Helis head back to New Jersey by crossing the Hudson to Newark (some to Teterboro) or flying down to Staten Island and over to Kearny. The point is to keep tourists as close to the ground as possible, regardless of noise and pollution. These days FlyNYON freely advertises: “Take the Perfect Shoe Selfie over NYC,” accompanied by a photo of bare feet hanging outside the heli.

To the FAA Central Park is a Road for Helicopters
To make sense of what’s happening in the skies of New York, it’s helpful to remember that the Federal Aviation Administration (FAA), the federal regulatory agency overseeing flight, simultaneously asserts its jurisdiction aggressively and refuses to act. "Any helicopter may fly over Manhattan," an FAA spokesperson told Our Town newspaper. "The FAA has designated a specific route over Central Park to allow flights from either side of Manhattan or to reach destinations outside New York City. This corridor is known as the Central Park Route and runs from West 72nd Street to the northern tip of Roosevelt Island." There’s something slightly obscene about a federal agency regarding New York’s cherished Central Park as a traffic corridor, but that’s the attitude.

Restrictive Agreement in Shreds
FlyNYON’s relentless flights over New York make a joke of the hard-won 2016 agreement by which helicopter companies based at the Downtown Heliport agreed to (1) avoid flying over land, (2) reduce the number of flights by 50% on a tight schedule, (3) not fly on Sunday, (4) ban flights over Governors Island, and (5) turn around before the George Washington Bridge when flying up the Hudson, which in practice meant 79th Street for most flights.

Since FlyNYON operates out of New Jersey, and not the Downtown Heliport, it is free to defy the agreement’s restrictions, as are all tour companies flying from any non-NYC helipad. Heli-tours now operate on Sunday, and pilots fly where and when they want with abandon.

Perhaps even worse, many flights violate common decency, continuing to fly hours after dark, which means they turn on powerful searchlights so that their passengers can see the ground. Some tour companies fly until midnight, especially in Lower Manhattan.

How do I know? FlightRadar tells me so.

Technology Uncovers What Government Hides
For years Manhattan Borough President Gale Brewer and other elected officials tried to get helicopter companies to display their identification numbers clearly, much like city buses or police cars. Yet the city’s attempts to force identification of helicopters and to control quality-of-life issues like noise and pollution were preempted by Supreme Court Justice Sonia Sotomayor in 1997. As a district judge in National Helicopter v City of New York, she permanently enjoined the city from imposing a mandatory 47% reduction in helicopter operations at the East 34th Street Heliport, designating tourist sightseeing routes, excluding heavy Sikorsky S-58Ts from sightseeing flights, and mandating that all helicopters be marked for identification. A federal appellate court subsequently allowed the city to restrict operations while permitting Sotomayor’s ban on markings to stand.

But now technology has effectively preempted the courts. FlightRadar lays it all out for us: the helicopter call sign, registration, serial number, age, route at any given time, calibrated altitude, vertical speed, squawk, and more. When Sotomayor ruled against the city, she effectively blocked us from the information that FlightRadar now routinely gives us.

Not only do many heli-tours regularly fly the forbidden routes over land, Central Park, Ground Zero, and Governors Island, they do so with complete impunity and at extraordinarily low heights, such as 300 feet. And they hover wherever they like.

The agreement specifically forbade flying over Staten Island, which many pilots now do because it’s an efficient route home to New Jersey

You can check this for yourself using FlightRadar’s app or its computer site, either of which will quickly find your current location and display the aircraft above you. A helpful feature is the color scheme. The trail behind an aircraft changes with altitude. Below 100 meters the trail is white, above 100 meters, the trail switches to yellow, and then to green up to 2,500. The categorization gives you a fast, visual idea of who’s flying too low.

Commuter Helis Fly Fast and Low
Many anti-heli-tour advocates stop short of protesting commuter flights, perhaps figuring that it’s hopeless since the FAA classifies transportation as essential, and the FAA fights like a tiger for its turf. Yet commuter flights can be among the noisiest, huge Sikorskys thundering like freight trains across the Bronx, Queens, and Brooklyn into Manhattan at 400-1,000 feet.

Given the covid shutdown of its economy, New York has had far fewer commuter flights this August, and few of the Hamptons flights that drove crazy those in the flight path last summer. Nonetheless New Yorkers should be thinking of the future, and what happens as life starts to return toward and to ‘normal.’

New Jersey Also Suffers
Intrusive as the helicopters are for New Yorkers, they’re also bad for New Jerseyans in heli paths because they fly ever lower as they move across the Hudson. This can be seen readily on @SkyCirclesNYC’s Twitter feed, which tweets about aircraft flying in circles over the New York metro area. Many of the same helis that loiter over Central Park return home and loiter over Hoboken, Jersey City, and other pretty waterfront areas — and they fly at a truly scandalously low height of 300-500 feet.

Any effort to reconfigure New York’s nightmare in the skies will need to join with New Jersey, as the rejuvenators of the old coalition, StoptheChop, well know. Both states are part of the name: NY/NJ. Many eminent New Jersey officials support the coalition, including both senators, but Gov. Murphy is missing.

Can Legislation Save Us?
The most recent proposed bill is a local law to amend New York City’s administrative code to reduce noise by chartered helicopters, prohibiting any helicopter not meeting stage 3 noise levels from taking off or landing at city-owned heliports. The bill was introduced in July by City Council Members Paul Vallone (Northeast Queens), Ben Kallos (Upper East Side, Manhattan), and Margaret Chin (Lower Manhattan), who represent areas subject to heli blitzes.

The federal Improving Helicopter Safety Act of 2019, introduced in October by Congressional Rep. Carolyn Maloney and co-sponsored by Reps. Jerry Nadler and Nydia Velázquez, would prohibit nonessential helicopters from flying in covered airspace of any city with a population of over 8 million people and with a population density of over 25,000 people per square mile (that’s New York City, of course) — including waterways within the city’s jurisdiction. The bill would be a start, but it’s basically gone nowhere.

The next demonstration of heli onslaught may be today — 9/11. Will helicopters be prohibited from continuing their pattern of hovering over and buzzing Ground Zero, once collectively acknowledged as sacred ground? Or will the federal government persist in their position that any helicopter may fly over Manhattan unimpeded today and beyond?

Note: this article has been clarified with up to date information about the 2016 agreement and which companies run which heliports.