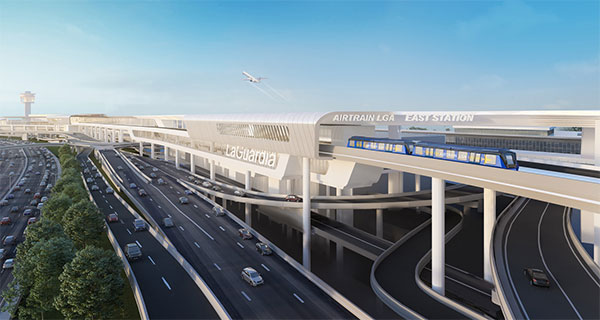 Rendering of the Airtrain LaGuardia (photo: A Better Way to LGA )

When it comes to rebuilding an economy mired in crisis, my brothers and sisters in the Building and Construction Trade unions have been on the front lines time and time again. We know that building back our economy always begins with building up our infrastructure better than before. And today is no different.

AirTrain LaGuardia is a perfect example of an infrastructure project that can lead the way in putting New York City back on its feet. Construction of AirTrain will get 3,000 skilled union members back to work in good-paying jobs at a time when those jobs – and the additional economic activity they will create – are sorely needed.

Members of the building and construction trades suffered greatly during the pandemic. At one point during the spring, 975,000 construction workers around the nation were unemployed as job sites shut down due to the deadly threat of COVID-19.

Yet at projects deemed essential here in New York, including the building of a new LaGuardia Airport, our union workers continued to show up every day. We worked with our partners to make the job site as safe as possible, and we kept the project moving forward on time, as you saw with the opening of a new Terminal B in June.

That’s why we at Laborers’ Union Local No. 731 strongly support AirTrain LaGuardia, which will create the kinds of jobs we need most – jobs that are a pathway to the middle class. And thanks to expansive apprenticeship programs offered by the Building and Construction Trades Council of New York, as well as our local, these are jobs that are increasingly filled by people of color, women, and military veterans from right here in the five boroughs.

LaGuardia Airport is the only major airport on the East Coast without a rail mass-transit link. That was unacceptable in years past and it is even more unacceptable going forward as our workers build the nation’s most technologically sophisticated, efficient, and beautiful airport in the country.

AirTrain would create a dependable ride from the airport to Midtown Manhattan, taking less than 30 minutes with a connection at Willets Point to either the LIRR or the No. 7 subway. Based on surveys of passengers at LaGuardia, as many as 10 million travelers a year would use AirTrain, removing millions of vehicles annually from congested highways and local streets.

Unlike the other alternatives, some of which have been debated for decades, AirTrain LaGuardia would take no private property and would not run through any residential neighborhood or commercial districts. It would be separated from the nearest homes by the eight-lane Grand Central Parkway.

This is a project that can get done. The Port Authority and our union workers have a track record of completing major infrastructure, including AirTrain JFK, a project that I am proud to have worked on for four years as a shop steward. Our skilled union workers built AirTrain JFK, which has been successful far beyond expectations, outpacing paid ridership projections by 55 percent and serving as a catalyst for more than $1 billion in private and public investment in downtown Jamaica.

A new AirTrain LaGuardia connecting to expanded LIRR and subway service could play the same role by jumpstarting the redevelopment of a blighted, industrial site at Willets Point into a new neighborhood with mixed-income housing, shops, hotels, a new school and new parks astride some of the city’s great attractions, creating even more jobs for our building and construction trades and opportunity for all New Yorkers.

We can no longer afford to waver and delay before moving forward. Waiting is not an option during an economic crisis. Now is the time to invest in a 21st century infrastructure for a 21st century post-covid economy by moving forward with AirTrain LaGuardia. The skilled men and women of our New York’s Building and Construction Trades Council, including Laborers Local 731, stand ready.

***
Carmine D’Amato is the Assistant Business Manager for Laborers’ Union Local No. 731