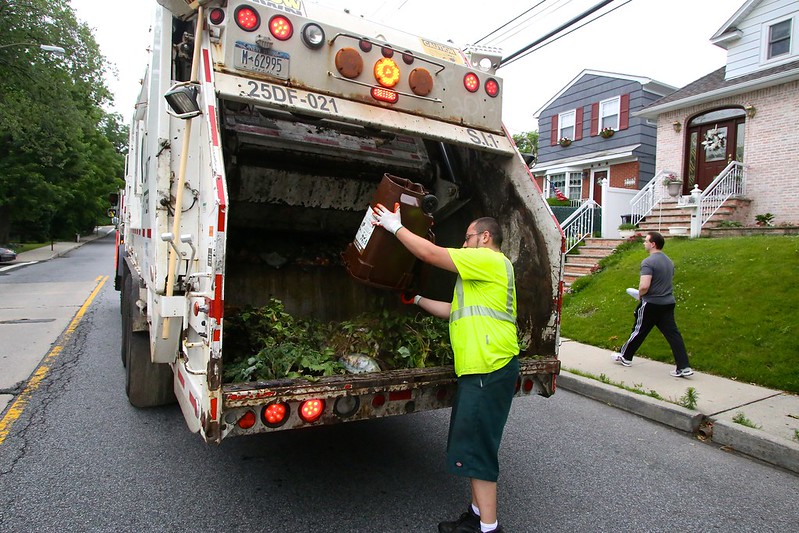 As we come out of the Thanksgiving holiday and head further into the season of holiday meals, it is useful to take a moment to think about where all of those leftover food scraps end up. The ability to divert this organic waste from landfills is a lot more limited this year due to substantial budget cuts to New York City’s voluntary composting program. Utilizing recently-developed, small-scale organic waste digesters in residential buildings offers a new, economically-viable path forward.

In recent years, efforts to sustain New York City’s composting program have focused on mandating organics recycling through legislation. This strategy is modeled after the city’s existing approach to non-organics recycling, in which paper, plastic, and metal are processed through centralized infrastructure. However, handling organic waste actually lends itself to a localized setup if the right technology is available.

Under the now largely defunded city composting pilot program, the city Department of Sanitation (DSNY) coordinated residential curbside pickup for organic waste in small dwellings (nine units or fewer), much like they do for recyclables. The collected material was then transferred to centralized sites for conversion to compost.

A core challenge that plagued the voluntary program was a low average participation rate, resulting in DSNY trucks collecting at about a tenth of their capacity. From an economic standpoint, this translates to organic diversion costing as much as six times more than conventional landfill disposal per ton.

Regardless of whether organic diversion rates improve in small residences, there is no setup in place to process organic waste in medium- and large-scale residential buildings, i.e., those over nine units. Some key challenges are limited storage space for the separated material prior to disposal and the accompanying odor that can trigger rodent and insect infestations if not properly managed. The amount of organic waste produced and energy usage of these larger residential buildings put them on the right economy of scale to take up new, onsite organic waste digestion technology.

Typical small-scale aerobic digesters (SADs) cost approximately $150,000 per unit. They produce a nutrient-dense, soil-like material that is completely non-toxic – meaning that it is not subject to any regulatory controls. This output product can be used as an additive in building landscaping or as fertilizer for community gardens. Since the processed material is odorless and dehydrated, it can also be stored onsite until it can be picked up by DSNY or a private hauler to be added as a valuable ingredient to existing commercial composting or energy digester conversion programs.

With additional equipment (approximately $150,000), the high-energy content material output can be used onsite to power a building’s boiler. This can displace other building energy purchases such as fuel oil, natural gas, or electricity from the grid, while saving money in the process.

SADs offer a number of other advantages. The units can run continuously with minimal oversight and are easy to operate (adding the enzymes is similar to loading laundry detergent).  Much like a building’s compactor, operating and maintenance costs for SADs are low and any necessary repairs are generally covered by a warranty. The relatively fast transfer of organic waste to digesters within a building also reduces pest management costs and any unpleasant odor. On the city-wide level, this also provides health-related benefits by decreasing rodent- and insect-based diseases, as well as exposure to any chemicals used by exterminators.

Policy changes could provide new financial incentives to encourage the use of aerobic digesters in residential buildings. Some examples include tax credits for each ton of landfill waste avoided (including tipping fees, transport costs, truck wear and tear, etc.) and offsets related to avoided greenhouse gas emissions. Funding for installation of SADs could be considered under the New York State Energy and Research Development Authority (NYSERDA) energy upgrade programs and the Property Assessed Clean Energy (PACE) financing program established under Local Law 96.

Perhaps the most important shift in localized organics processing is the transition from an incentive-based “carrot-style” philosophy over the mandatory “stick-style” approach. Providing incentives to buildings will likely encourage management to play a larger role in getting their residents to separate organic waste. In tandem, this would relieve the city of some costs associated with educational organics recycling programming and public service announcements. The added convenience of dropping off these materials in one’s own residential building should also increase the rate of organic waste diversion.

We suggest that the city help expedite the potential implementation of aerobic waste digestion in residential buildings by developing pilot programs that generate a clearer picture of the full cost savings. While budgetary pressures are high at the moment, the gains seem well worth the costs of subsidizing a handful of digesters in buildings willing to participate. Another option is for New York City to consider legislation that requires new buildings to leave space in their designs to install this equipment, if not also require its use.

The solution to shortcomings with the New York City zero-waste initiative may very well be the opposite of what we thought – not to centralize our organic waste recycling efforts, but rather localize them at the residential level. Technology now presents us with an option for an innovative and cost-effective path forward. Let’s choose this local detour, as it might just make all the difference.

***
Nancy Holt, PhD is the Co-founder of Science for New York (Sci4NY) which aims to have local scientists support decision makers through project-based interaction. On Twitter @Sci4NY.

Brandon M. McMurtry is a PhD candidate in Chemistry at Columbia University in New York and a member of Sci4NY.

Calder Orr, MPA Environmental Science and Policy from Columbia University, is a Research Scientist with the City of New York.